"The best place to defend is in the opposition penalty box."- Jock Stein

1. Learning the New Rules of the Game

In the game of football, your good performance and hard work of the entire game can go for a toss with just one wrong or foul move resulting in the award of a penalty shoot-out to your opponent. Sometimes, even an error of judgement by the Referee may also result in a penalty. Whether it's your foul play or the error of judgement by the Referee, once a penalty shoot is given to your opponent, then You are left with no other choice but to save your Goal. And for saving your goal, it is quintessential that you know the rules of penalty-shootout like how many defenders can remain in the inside circle etc., so that you may not give another penalty shoot-out opportunity to your opponent.

Like-wise, in the game of tax assessments, just one false or inaccurate particular of your income or sometimes even an error of judgement by the assessing authority can result in giving that penalty shoot-out to the assessing authority. Here also, in order to save your Goal (read levy of penalty), you ought to know the rules of the game.

In this Taxalogue, I am just trying to decode and explain the newly inserted rules of penalty shoot-out i.e. the newly legislated Faceless Penalty Scheme, 2021.

Section 274 of the Income Tax Act provides for the procedure, for imposing penalty (for underreporting or misreporting of income u/s 270A) under Chapter XXI of the Act. In response to a showcause notice issued by the Assessing Officer (AO), assessee or his authorised representative was still required to visit the office of the Assessing Officer. With the advent of the Faceless Assessment Scheme, 2019 and in order to ensure that the reforms initiated by the Department to eliminate human interface from the system reaches the next level, it was imperative to launch a Faceless Penalty Scheme on the lines of Faceless Assessment Scheme, 2019.

Therefore, the Finance Act 2020 has inserted an enabling provision in the form of a new sub-section (2A) in section 274 of the Act so as to provide that the Central Government may notify an e-scheme for the purposes of imposing penalty so as to impart greater efficiency, transparency and accountability by— 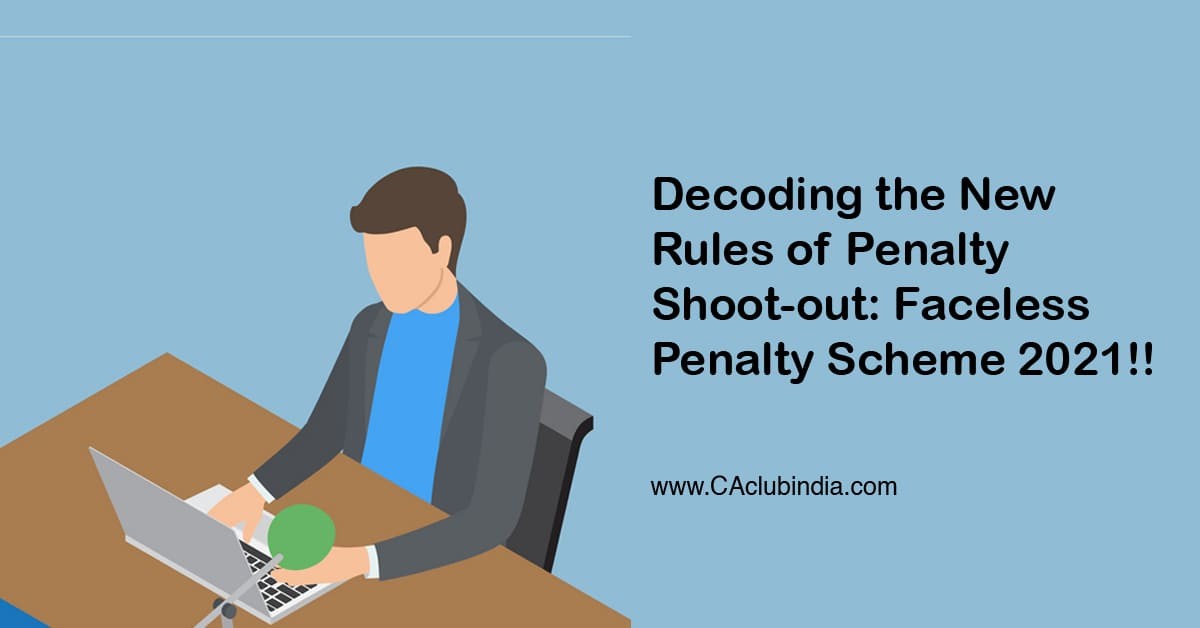 The easiest way to understand the practicalities and nuances of any new/amended piece of legislation is to compare and analyse it with the existing provisions. So, for a better and clear understanding of the worthy readers, the points of distinction between the manner and mode of conducting of the conventional penalty proceedings and the new faceless penalty proceedings to be conducted under the Faceless Penalty Scheme, 2021, are being tabulated as under:

For the purpose of conducting of the penalty proceedings in a faceless manner, the CBDT is setting up:

(i) a National Faceless Penalty Centre to facilitate the conduct of faceless penalty proceedings in a centralised manner and vest it with the jurisdiction to impose a penalty in accordance with the provisions of this Scheme;

(ii) Regional Faceless Penalty Centres, as it may deem necessary, to facilitate the conduct of faceless penalty proceedings, which shall be vested with the jurisdiction to impose a penalty in accordance with the provisions of this Scheme;

(iii) Penalty Units, as it may deem necessary, to facilitate the conduct of faceless penalty proceedings, to perform the function of drafting penalty orders, which includes identification of points or issues for the imposition of penalty under the Act, seeking information or clarification on points or issues so identified, providing an opportunity of being heard to the assessee or any other person, analysis of the material furnished by the assessee or any other person, and such other functions as may be required for the purposes of imposing the penalty; 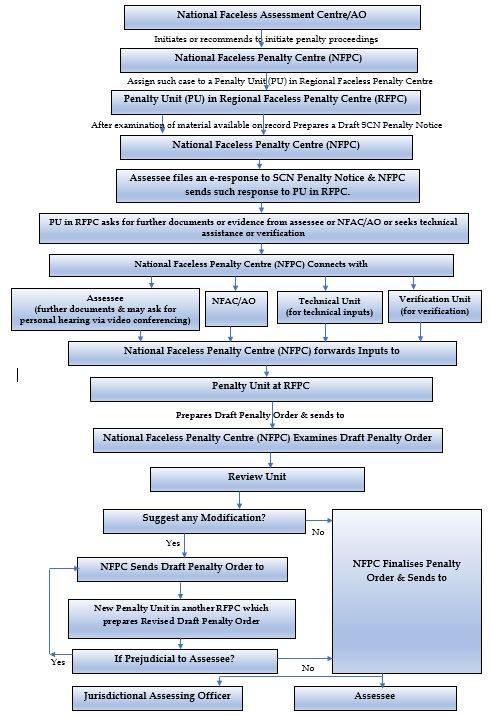 a. Currently there is one common response window for the faceless assessments, faceless appeals and the faceless penalty proceedings. In future, separate windows may be provided.

c. Currently the Video Conferencing (VC) functionalities are in the process of being built and soon the VC links will be available in the e-proceedings window of the e-filing portal.

d. UDINs are not required for e-filing of assessments and appeal submissions in the faceless regime.

e. The formats of State-wise Vakalatnamas with applicable stamp duty will also be available shortly in the e-filing portal.

Faceless Penalty Scheme, 2021 is indeed a revolutionary and path-breaking initiative of the Government, aimed at reforming and overhauling the tax administration system and curbing the undesirable practices prevailing in the system, by eliminating the personal interface between the assessee and the assessing authority.

However, it is not uncommon for any new reform-oriented initiative to face some teething problems during the initial stages of its implementation and practice.

Accordingly, such critical areas where there is still scope of some improvement are discussed as under:

a. A By- Default Right of Personal Hearing via Video Telephony to the Assessee should be provided in the Faceless Penalty Scheme, 2021.

In the Faceless Penalty Scheme, 2021, the assessee is not having any 'by-default' right of personal hearing and he/she may only request for a personal hearing by way of video conferencing/telephony, so as to make his/her oral submissions or present his/her case before the penalty unit under this Scheme.

The Chief Commissioner or the Director General, in charge of the Regional Faceless Penalty Centre (RFPC), under which the concerned penalty unit is set up, may approve the request for personal hearing, if he/she is of the opinion that the request is covered by the circumstances as may be notified by CBDT.

The circumstances where the request of the assessee for personal hearing via video conferencing may be approved are yet to be notified by CBDT.

Thus, a suitable clarification concerning the specified circumstances wherein the request of personal hearing of the assessee may be approved by the CCIT RFPC is desirable.

This burning and litigative issue of lack of suitable opportunity of being heard in the new faceless regime resulting in violation of Principle of Natural Justice & Article 14 of the Constitution of India, has become more critical in view of the admission of the writ petition of the taxpayer by the Hon'ble Delhi High Court in the case of Lakshya Buddhiraja on 16.10.2020, on this very issue.

Levy of penalty in some provisions of Income Tax Law may also result in prosecution in addition to the monetary terms, so the grant of a suitable opportunity of being heard by way of video telephony or similar means, becomes all the more essential and necessary in the adjudication of penalty.

b. Provision of Alternative Mode of Uploading Files as Attachments along with e-Submissions, other than the Scanned Files.

However, the assessee can attach scanned documents only in .pdf, .xls, .xlsx, .csv format. At times, the process of scanning of files or their conversion into pdf files for the purpose of uploading is a very cumbersome and tedious process and involves a lot of time. So, this file conversion becomes an irritant and hinders the smooth and uninterrupted uploading of supporting attachments to be attached `along with the response to any query to a notice.

The requirement of scanning of files or the conversion of files into pdf version to make them up-loadable should be done away with and instead of a standard file format like 'XML' in line with the International Best Practice of 'Standard Audit File for Tax' (SAF-T), should be adopted and implemented for uploading files and attachments, by aligning and integrating the 'e-proceedings' functionality of the ITBA module with that of the natural accounting systems of assessees.

The concerned Legislative Authorities should immediately address the above-stated grey areas and litigative issues concerning this path-breaking and revolutionary initiative of faceless penalty so as to ensure their timely redressal and avoidance of opening up of the unnecessary pandora box of litigations.