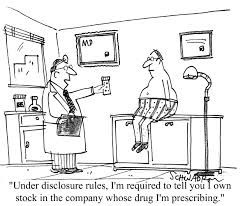 Disclosure of Interest of by director in any firm or body Corporate:

Every director shall disclose his concern or interest in any company or companies or bodies corporate, firms, or other association of individuals which shall include the shareholding, by giving notice  in Form MBP -1 in such manner as prescribed. under Rule 9 of Companies (MBP)Rules,2014-

- at the first meeting of the Board in every financial year or whenever there is any change in   the disclosures already made, then at the first Board meeting held after such change.

Disclosure of Interest of by director in any Contract or Arrangement:

It shall be the duty of the director giving notice of interest to cause it to be disclosed at the meeting held immediately after the date of the notice.

A contract or arrangement shall be voidable at the option of the company.-if

- Entered without disclosure of interest by director or

- with participation by a director who is concerned or interested in any way, directly or indirectly, in the contract or arrangement,

This provision shall not –

- Prohibit  a director of a company from having any concern or interest in any contract or arrangement with the company;