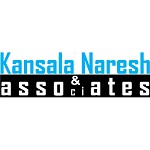 
As we all know companies bill is passed by both houses of parliaments and some of is section are applicable from 1-4-2014. i.e. out of 470, 283 sections are applicable and section 123 and schedule II is one of them

Before discussing the this, first of all let’s have a look on major changes in schedule II

1. Companies act 1956 does not deal with the amortization of intangible Assets but New Schedule by companies’ act 2014 provide the method to amortize them.

2. Instead of method and rates of Depreciation (whether WDV method or Straight line Method and Single shift or double shift or triple shift) new Act prescribed only assets’ useful life.

4. New act prescribed the residual value to be 5% of cost of asset, in older schedule there is no such prescription as but rates given by schedule are worked out by considering the 5% residual value.

6. The concept of 100% depreciation of assets whose cost is less than Rs. 5000/- is deleted hence under new act it will be depreciated as per other normal provisions of schedule II.

7. Under act if any component of Asset have significant cost and has useful life other than the assets then is should be considered as separate asset for depreciation.

8. List of assets cover is more specific in new schedule.

To apply the schedule II on the running companies schedule II has Note No. 7 which have 2 clauses we’ll discuss them sequentially

Let’s understand with the help if an example:

We taking a general purpose plant and machinery on WDV basis:-

Now i am just pausing here to ask you some questions:-

1. What should be the carrying amount?

2. What should be the remaining useful life of Plant and machinery?

3. What should be the rate of depreciation?

4. What should be the amount for Depreciation?

Now Let’s find out the Answers:

Q.1. What should be the carrying amount?

Q2. What should be the remaining useful life of Plant and machinery?

In given example: Revised life of Plant and machinery as per schedule II is 15 years and expired life is 5 years therefore remaining useful life is : 15-5= 10years

Q3. What should be the rate of depreciation?

Ans. In first instant rate 18.10% seems to be the correct answer, because we are takings about plant and machinery and its rate of depreciation on basis of its revised useful life as mentioned in schedule II is comes out 18.10%.

But as per note 7(a) the asset as on that date shall be depreciated over the remaining useful life of the asset as per this Schedule II.

So we take the rate on the basis of remaining useful life which is 10 years in given example and corresponding rate is 25.89%.

Q4. What should be the amount for depreciation?

Answer: The carrying amount @ rate corresponding to the remaining useful life of asset as at 1st April, 2014

The result of above is as under: 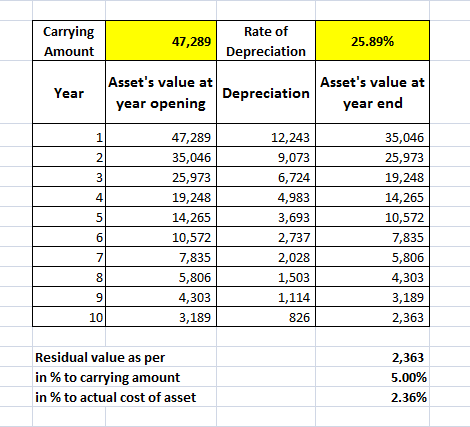 Note 7 (b) From the date this Schedule comes into effect, the carrying amount of the asset as on that date After retaining the residual value, shall be recognised in the opening balance of retained earnings where the remaining useful life of an asset is nil.

Let's understand it with Example:

As per my personal views residual value is Rs. 5000/- on the basis of “cost of asset” because schedule II says the residual value should not be more than 5% of cost of the asset.

So the entry in the books of account at the beginning of the year i.e. on 1st April 2014 is

Views and comments are solicited and welcomed even if contrary.