As you all know, The Companies Act 2013 has been notified and made applicable from the financial year 2014-15. The 2013 Act introduces significant changes in the provisions related to Financial Statements, Disclosure Norms, Compliance and Enforcement, Auditors etc. Also, new concepts such as one-person company, small companies, dormant company, and corporate social responsibility have been included.

While discussing the new provisions under Companies Act 2013 regarding preparation of financial statements, we will cover changes regarding following aspects:

Following are the changes to keep in mind:

a) Now financial year can only be of April to March. A transition period of 2 year has been prescribed for companies existing on the commencement of this Act to align their financial year to April-March. This point is however not important for us since none of our clients has an accounting year different from the prescribed financial year.

b) Financial Statements in relation to company includes:

i. Balance Sheet at the end of financial year:

ii. Statement of Profit & Loss for the financial year;

iv. Statement of Changes in Equity, if applicable (However conditions of applicability of statement in change in equity has not yet been mentioned in the Companies Act, 2013).

NOTE: (Cash Flow Statement will be made as prescribed in AS-3, however format of statement of change in equity has not been prescribed yet).

c) The FS shall give a true and fair view and comply with the AS & shall be in the form as provided in Schedule III.

d) The FS shall be laid in the AGM within six months form the end of the financial year.

e) The holding company shall in addition, prepare a Consolidated Financial Statement of the Company along with its all subsidiaries, associates & joint ventures and lay before the AGM. All Companies including unlisted and private companies, with subsidiaries will need to prepare CFS.

f) A company will disclose the list of subsidiaries or associates or joint ventures, which have not been consolidated along with the reasons for non consolidation.

The 2013 Act states that a company can be classified as dormant when it is formed and registered under this 2013 Act for a future project or to hold an asset or intellectual property and has no significant accounting transaction. Such a company or an inactive one may apply to the ROC in such manner as may be prescribed for obtaining the status of a dormant company. [Section 455 of 2013 Act]

• Mandatory auditor rotation and joint auditors: The 2013 Act now mandates the rotation of auditors after the specified time period. The 2013 Act also includes an enabling provision for joint audits.

Please follow the link (https://goo.gl/gCjopa ) for format of Auditor’s report & CARO as per Companies Act, 2013.

• Section 123(2) provides that the depreciation shall be calculated as per the provisions of Schedule II;

• Calculation of depreciation will be based on useful life & residual value.

i) Paid-up share capital of which does not exceed 50 lakh INR or such higher amount as may be prescribed which shall not be more than five crore INR.

The 2013 Act states that a company can be classified as dormant when it is formed and registered under this 2013 Act for a future project or to hold an asset or intellectual property and has no significant accounting transaction. Such a company or an inactive one may apply to the ROC in such manner as may be prescribed for obtaining the status of a dormant company. [Section 455 of 2013 Act]

• From the date Schedule II becomes effective carrying amount of the asset shall be depreciated over the remaining useful life of the asset.

• For the purpose of this Schedule, the term Depreciation includes amortisation.

• For intangible assets, the provisions of the Accounting Standards mentioned under subpara (i) or (ii), as applicable, shall apply.

• Separate capitalization and depreciation of a part of an asset if its cost is significant to the total cost of the asset and its estimated life is different from the remaining asset.

• After retaining the residual value, shall be recognised in the opening balance of retained earnings where the remaining useful life of an asset is nil.

• The 2013 Act mandates preparation of consolidated financial statements (CFS) by all companies, including unlisted companies, having one or more subsidiaries*, joint ventures*or associates*.

• In order to comply with these requirements, a company which has a global presence, with subsidiaries both within as well as outside India will need to comply to the following:

b. Prepare a CFS, including all subsidiaries, associates and joint ventures (whether in India or outside) [section 129(3) of the 2013 Act]

• Companies that do not have one or more subsidiaries but have associates or joint ventures have to prepare CFS from the year ending 31 March 2016. Thus, such companies have been given a relief of one year from the preparation of CFS.

a. The definition of ‘related party’ with respect to a company is a wide definition and includes holding company, subsidiary company, sister subsidiary, associate company, directors, key management personnel (including relatives), firms/companies where directors/relatives are interested. Further, ‘relatives’ in relation to an individual covers specified relationships without distinguishing between financially dependent and independent relatives.

c. Certain transactions with related parties, which are not in the ordinary course of business and which are not at an arm’s length would require the consent of the Board of Directors of the company. Further, shareholders’ approval is required for transactions where certain threshold limits* are met.

d. It may also be noted that the Director’s Report under Section 134 of the 2013 Act is also required to include the details of related party transactions requiring consent of the Board/special resolution of members along with the justification for entering into them.

e. The particulars of contracts or arrangement with related parties referred in section 188(1) of the Companies Act 2013 should be disclosed in the Directors Report for the financial years commencing on or after April 1, 2014 in Form AOC-2 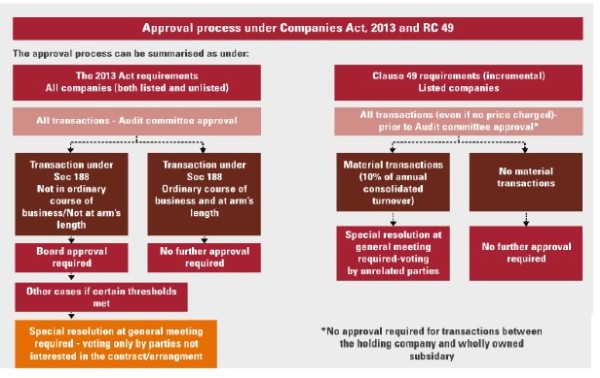 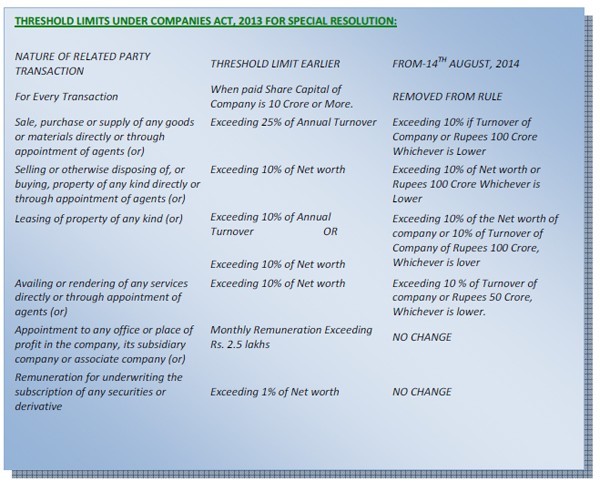 b. A private Company and an un-eligible public company* cannot accept loans or deposits from any person other than its Directors. For accepting any loan from person other than Directors the company will have to comply with all the conditions mentioned including creation of reserve account, deposit insurance, credit rating, etc.

d. Any money received as advance in the course of ordinary business shall be treated as deposit if goods or services are not provided within 365 days of receipt.

e. Any amount received from any other Company shall not be considered under the ambit of deposit.

b. The Act encourages companies to spend at least 2% of their average net profit in the previous three years on CSR activities.

c. The company can implement its CSR activities through the following methods:

i) Directly on its own;

ii) Through its own non-profit foundation set- up so as to facilitate this initiative;

A public Company and it has either of the following-

2) It has obtained the prior consent of the company in general meeting by means of a special resolution;

3) It has filed the above resolution with the Registrar of Companies before making any invitation to the Public for accepting deposits.

Exception: An eligible company may accept deposits by means of an ordinary resolution if it is accepting deposits within the limit specified under clause (c) of sub section (1) of section 180

iv) Collaborating or pooling their resources with other companies

d. A format for the board report on CSR has been provided which includes amongst others, activity-wise , reasons for spends under 2% of the average net profits of the previous three years and a responsibility statement that the CSR policy, implementation and monitoring process is in compliance with the CSR objectives, in letter and in spirit. This has to be signed by either the CEO, or the MD or a director of the company.

e. Please note that CSR expenditure will not be deductible while computing taxable income under income tax act, 1961. 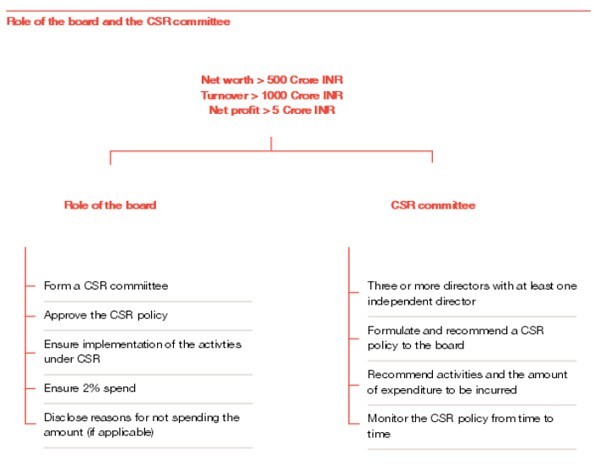 The category of companies which need to comply with the requirement of having at least of one woman director are as follows: * [section 149(1) of 2013 Act]:

a. Every listed company, within one year from the commencement of second proviso to subsection

b. Every other public company that has paid–up share capital of 100 Crore rupees or more, or a turnover of 300 crore rupees or more within three years from the commencement of second proviso to sub-section (1) of section 149.

a. Every listed company;

b. Every public company having a paid-up share capital of 50 Crore rupees or more; or

c. Every public company having a turnover of 250 Crore rupees or more.

• Loans to Directors and Subsidiaries: (Chapter XII of the CA 2013)

a. In accordance with section 185 of the 2013 Act, a company cannot, directly or indirectly, give any loan, including loan represented by a book debt, to any of its directors or to any other person in whom the director is interested or give any guarantee or provide any security in connection with any loan taken by him or such other person.

b. The 2013 Act explains the expression ‘any other person in whom director is interested’ to include “a body corporate, the board of directors, managing director or manager, whereof is accustomed to act in accordance with the directions or instructions of the board, or of any director or directors, of the lending company.”

c. Apparently, this explanation may cover subsidiary companies. Hence, one interpretation was that a holding company cannot give any loan to/guarantee/ security on behalf of its subsidiary.

The Board Rules provide the following exemptions. These exemptions are subject to a condition that loans should be utilized by the subsidiary company for its principle business activities:

ii. Any guarantee given or security provided by a holding company in respect of loan made by any bank or financial institution to its subsidiary company (includes subsidiaries that are not wholly owned) is exempted from the requirements under this section.

c. Loan given to, security/guarantee provided on behalf of the joint venture company will not be included in determining whether the company has breached the 60% or 100% limit.

d. In the Board Rules, there is no relaxation/exemption on the requirement concerning charging of interest on loans. Hence, it appears that a company may need to charge interest at the specified rate on all its loans, including loans given to wholly owned subsidiaries and joint ventures. In accordance with the 2013 Act, rate of interest cannot be less than prevailing yield on one year, three year, five year or ten year Government Security closest to the tenor of the loan.