Book Review 1 - Not Just An Accountant


Not Just An Accountant - The Diary of the Nation's Conscience Keeper 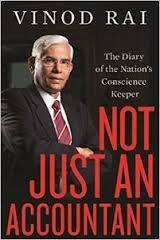 7 January 2009 - A normal day with business as usual turned into one of the darkest day in the Indian corporate history.  The company which had as recent as September 2008 received Golden Peacock Award for Excellence in Corporate Governance, fell like 9-pins; share prices tumbled; clients deserted; and soon Satyam become the pariah in Indian IT industry.

While the turnaround of Satyam remains one of the rarest occasion of successful multi-agency coordination between Indian govt, SEBI, MCA, SFIO, other IT companies and international regulators like SEC, the fact that Ramalinga Raju, despite a confession in black and white, was able to avoid any stringent criminal or civil penalty remains a black mark on Indian judicial system.

What happened at Satyam, as it was later revealed, was that the greed of its promoter undermined all the standards of the ethical governance.  However, the one good thing about this scandal/swam was that the media reporting in general was more or less accurate. Albeit, aided by the fact the Raju himself quantified the misstatements, the scope for exaggeration or suppression was reduced considerably, thus leaving little for journalists to play around with.

While Indian companies and regulators learned their lessons and cleaned up their houses to weed out any hidden skeletons in their closets, one must remember that the fraud at Satyam, howsoever complicated, atleast had one apparent culprit, Raju.  Thus, the fixing of responsibility was never an issue here. Kiran Karnik made the effort to document the scam in his book Satyam Saga.  In past also similar documents have been like “The Scam” by Sucheta Dalal and Debashis Basu, documentaries of Enron and Author Anderson.

However, rarely has anyone undertook the task to cover the organization which quite frequently delivers a healthy dosage of scams in India – The Polity of India ie the government, Members of Parliament and the executive of India. In scams involving government, the culprits are not that apparent and it require much greater sense of honesty and bravery in addition to auditing skills to stand up to the power circles of the country.

Vinod Rai, the 11th Comptroller and Auditor General of India, has undertaken this utterly difficult task to objectively document what actually went wrong with the functioning of Indian government that resulted in deluge of scams.   The book, “Not Just an Accountant”, is a cold and objective demonstration of how an auditor should be.  Not an accountant by profession, Mr Rai has succeeded in providing a template for all aspiring Chartered Accountants to follow if they wish to pursue ethical accounting and auditing.  With falling standards of personal probity, the role of Chartered Accountants has become increasingly important for ensuring economic prosperity of our society.  The template provided by Mr Rai should help us understanding our role in depth and adopt tenacity to perform our roles, howsoever difficult, without becoming despondent or losing hope.

While his tenure as the CA&G was mired with controversies, mud-slinging and constant undermining of the efforts of the Supreme Auditor of the country by its executive and political class, Mr Rai has demonstrated in book how a diligently carried out audit based on hard facts and scientific analysis shall withstand the rhetoric, whosoever shrill it might me.

The book is primarily divided into four parts:

Though in brief, Mr Rai gives a biographical sketch of his journey as an IAS officer.  Even in this part, he has made an attempt to restrict the narrative to instances which may help a young reader understand how the bureaucracy actually works.  This sense of providing lessons is visible throughout the book and the author has made barely any attempt to personalize the narrative.

His journey from Nagaland to Kerala is one of the few humorous parts of the book but nonetheless worth inspiring any young man or woman to take up a difficult path instead of settling for oft-beaten journeys.

The Role and Responsibility of CA&G

While CA&G doesn’t affect our normal functioning as CA professionals, we should not forget that a large number audits done by CA firms in public sector enterprises are done on behest of the CA&G and therefore it is incumbent upon us to objectively understand how CA&G functions.  Mr Rai has provided us with a detailed analysis for the same which should help us to remove any misinformation that may have been fed to us by media in past few years.

The second Chapter of the book, “The Role of Audit” is a must read for all the CA professionals.

Mr Rai has provided us with a detailed explanation of how six major scams in past decade were precipitated through actions and omissions of the Indian government.

This narrative should help budding CAs to understand the intricacies involved in the auditing profession and help them appreciate the importance of documentation and objective analysis despite being under adverse pressure. This is particularly important for those who are pursuing articleship and often are directed by their seniors to cut the corners during the audit exercise.

The detailed procedures should further help article assistants to appreciate the reasons behind the checks and balances installed in the execution as well as auditing processes.  This should help them in realizing the importance of their role, which is often undermined by their seniors, in the auditing profession.

During past two years, I have had the opportunity of working with many crooks – the one who would not cut corners but throw away the whole table to make way for their ambitions.  I am sure many of the CAs new into CA practice must have faced such situations.

While, Mr Rai wrote this part to address the issues of governance and accountability in public life, it is equally relevant for all of us to appreciate our role in the society and how our actions can help in development of India.

This book is a must read the CA fraternity and should in installation of broader standards of ethical conduct among Chartered Accountants.

Warning – It is possible that some of you may get bored as it does resemble lot like your auditing text books!