Bad Bank - A remedy for the NPA Illness

Many years back in the Mid 80"s one of my Paternal uncles a Rank Holder In Both CA & CPA was working in Mellon Bank in USA which was going through a Very hard time before switching to another Commercial Bank , however the new concept of Bad Bank first originated in Mellon Bank in the year 1988 when it had set up a separate entity by the legal name Grant Street National Bank (In Liquidation ) to take on its Toxic Assets (where the recovery rate of bad debts was very remote before merging their bank with Bank of New York and dissolving the special entity formed to take care of NPA's, Bad Loans, Toxic loans in the year 1995, this was the first case of Bad Bank existence in the public domain and eventual dissolution. 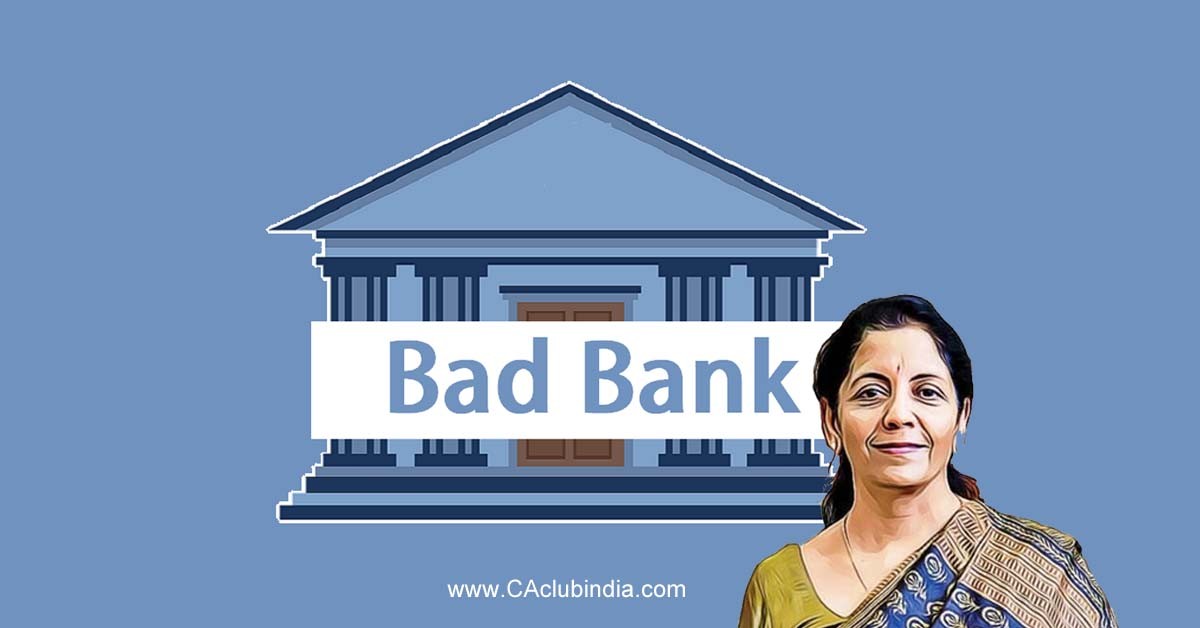 What is a Bad Bank?

In the Budget for FY 2021-2022, Finance Minister Mrs. Nirmala Sitharaman announced that an Asset Reconstruction Company Limited (ARC) and Asset Management Company (AMC) will be set up to deal with the stressed assets of the public sector banks. In this background, Finance Minister announced the establishment of National Asset Reconstruction Company Ltd (NARCL) a government backed Bad Bank along with IDRCL (India Debt Resolution Company Ltd) 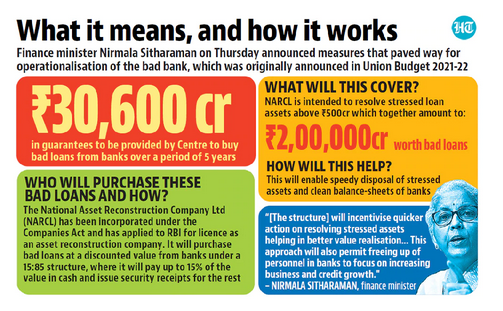 Let Us Go to the basics

NPA expands to non-performing assets (NPA). Reserve Bank of India defines NPA as any advance or loan that is overdue for more than 90 days. "An asset becomes non-performing when it ceases to generate income for the bank,". To be more attuned to international practices, RBI implemented the 90 days overdue norm for identifying NPAs has been made applicable from the year ending March 31, 2004.

Depending on how long the assets have been an NPA, there are different types of non-performing assets as well.

What is an asset for a bank?

• Asset means anything that is owned. For banks, a loan is an asset because the interest we pay on these loans is one of the most significant sources of income for the bank. When customers, retail or corporates, are not able to pay the interest, the asset becomes ‘non-performing' for the bank because it is not earning anything for the bank. Therefore, RBI has defined NPAs as assets that stop generating income for them.

There are different types of non-performing assets depending on how long they remain in the NPA category.

• An asset is classified as a sub-standard asset if it remains as an NPA for a period less than or equal to 12 months.

• An asset is classified as a doubtful asset if it remained as an NPA for more than 12 months.

• An asset is considered as a loss asset when it is "uncollectible" or has suchlittle value that its continuance as a bankable asset is not suggested.However, there may be some recovery value left in it as the asset has not
been written off wholly or in parts.

Among the bouquet of 12 big defaulting firms are the ones that used to makeSteel, Textiles, Infrastructure and Ships, distribute electricity, develop real estate and build infrastructure. Some of their assets need to be sold, and this will be a challenge in a slowing economy.

The loans began piling up between Years 2006 and 2008, when growth was buoyant and borrowing was easy. The global financial crisis of Sub Prime Crisis of USA During the Year 2007-2008 and the slowdown of growth left India relatively unscathed, and enthusiasm for investment didn't wane.

In spite of the best efforts, substantial amount of NPAs Still continue on balance sheets of banks primarily because the stock of bad loans as revealed by the Asset Quality Review is not only large but fragmented across various lenders. High levels of provisioning by banks against legacy NPAs has presented a unique opportunity for a faster resolution.

Existing ARCs (About 28) have been helpful in resolution of stressed assets especially for smaller value loans. Various available resolution mechanisms, including IBC have proved to be useful. However, considering the large stock of legacy NPAs, additional options / alternatives are needed and the NARCL-IRDCL structure announced in the Union Budget is this new initiative.

NARCL has been incorporated under the Companies Act and has applied to Reserve Bank of India for license as an Asset Reconstruction Company (ARC). NARCL has been set up by banks to aggregate and consolidate stressed assets for their subsequent resolution. PSBs will maintain 51% ownership in NARCL State owned lenders State Bank of India (SBI), Union Bank of India, Punjab National Bank (PNB) and Indian Bank have picked up a stake each in NARCL.

The NARCL has been incorporated under the Companies Act, and public sector banks will hold 51 per cent in the Bad Bank. The remaining Balance will be held by private banks and financial institutions.

About 16 public and private sector banks have put in Rs 5,000-6,000 crore in the bad bank. That will be utilized by it to pay 15 per cent cash to the lenders while purchasing their bad loans. The remaining 85 per cent will be paid through security receipts guaranteed by the government.

If NARCL manages to recover something from the bad loans, banks which sold them will get a direct bottom line boost. Given that NARCL is only going to take over fully provided for loans, it will take them over at 80-90 per cent haircut of  the initial Rupees 90,000 Crores. It will not be required to immediately fork out cash. It will pay the banks 15 per cent of the value upfront, paying the balance in Security Receipts (SRs), which will be redeemed as and when recoveries are made against the loans. The government has now offered to make up the shortfalls between the value of these Security Receipts and actual recoveries up to a sum of ₹30,600 crores (15% of Rs 200,000 Crores) 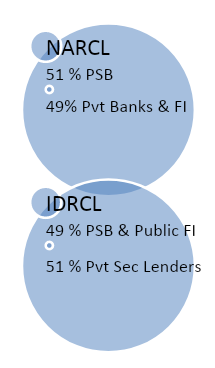 IDRCL is a service company / operational entity which will manage the asset and engage market professionals and turnaround experts. Public Sector Banks (PSBs) and Public FIs will hold a maximum of 49% stake and the rest will be with private sector lenders.

Practical Approach: One of the PSU banks has written off almost Rs 22,000 crores, so as per the concept of Bad Bank, they have to be sent to NARCL for Rs 2200 Crores for which they will get cash upfront of Rs 330 crores and the balance Rs 1870 Crores in Security Receipts, but what if the recoveries are more than Rs 2200 Crores, whether the concerned PSU which had written off the entire amount of Rs 22,000 Crores will get the benefit or in best interests of its own will pursue the case independently ? Secondly whether the Government will close the window of NARCL-IDRCL after 5 years is another pertinent question. But the American Experiment at Mellon Bank showed some positive results before winding up for good in the year 1995. So let us also give it a try and see for the results. I am a positive optimist by Nature.