“Small shareholders” means a shareholders holding shares of nominal value of not more than Rs.20,000/- or such other sum as may be prescribed.

If the person being proposed does not hold any shares in the company, the details of shares held and folio number need not be specified in the notice.

(b) that he is not disqualified to become a director under the Act; and

(c) his consent to act as a director of the company

Such director shall be considered as an independent director subject to , his being eligible under section 149(6) and his giving a declaration of his independence in accordance with section 149(7) of the Act. 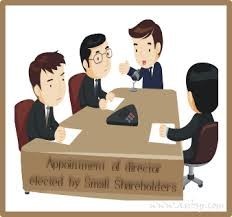 (a) such director shall not be liable to retire by rotation;

(b) such director’s tenure as small shareholders’ director shall not exceed a period of 3 consecutive years; and

(c) on the expiry of the tenure, such director shall not be eligible for re-appointment.

A person shall not be appointed as small shareholders’ director of a company, if the person is not eligible for appointment in terms of section 164.

A person shall not  hold the position of small shareholders’ director in more than two companies at the same time.

The second company in which he has been appointed shall not be in a business which is competing or is in conflict with the business of the first company.

(a) the director incurs any of the disqualifications specified in section 164;

(b) the office of the director becomes vacant in pursuance of section 167;

(c) the director ceases to meet the criteria of independence as provided in section 149(6).