Appointment of auditor in case of non-ratification of auditor

Act Language: The Company shall place the matter relating to such appointment for Ratification by members at every Annual General Meeting.

Rule 3(7) Proviso: Appointment of Statutory Auditor shall be subject to ratification in every annual general meeting till the sixth such meeting by way of passing of an ordinary resolution

“As per the above proviso Companies are required to ratify the appointment of Statutory Auditors who was appointed in last AGM for 5 financial years. Therefore from this year, every year in AGM an Ordinary Resolution is to be passed for ratification to continue as Statutory Auditor of the Company.”

If the Statutory Auditor is not ratified in AGM then it will be consider as CASUAL VACANCY.

PROCESS FOR RATIFICATION OF AUDITOR 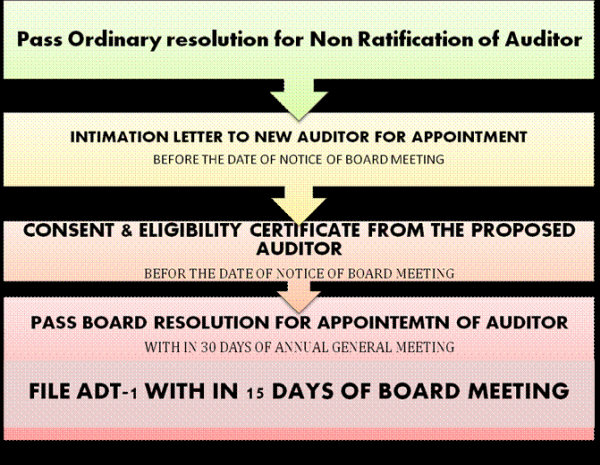 Term of such Appointment:

Such Statutory Auditor shall hold office till the conclusion of the next Annual General Meeting.

The Company shall inform the Auditor concerned of his appointment and file a notice of such appointment in e-form ADT-1 with the ROC within 15 days of the meeting in which the auditor is appointed.

DRAFTS FOR THE REFERENCE:

“RESOLVED THAT M/s ABC & Company, the Chartered Accountants, (FRN:___________) Delhi- 110085, be and are hereby appointed as Statutory Auditor of the Company to fill up the casual vacancy caused by the resignation of the M/s. PQR & Associates, the Chartered Accountants, (FRN: ____________), until the conclusion of the next Annual General Meeting of the Company at a remuneration of Rs. . . . . . . Plus reimbursement of any out- of- pocket expenses that may be incurred, in connection with the audit.”