A fight over jurisdiction(Vodafone Case)

I am sure that you must have heard of Vodafone Case in News or Discussions, But very few of us are aware of the fact of the case and the real story. It’s a landmark case of Indian Judicial system. I hope at least you will get to know the summary of this case through this article, which is equally important for practical knowledge of subject matter also. 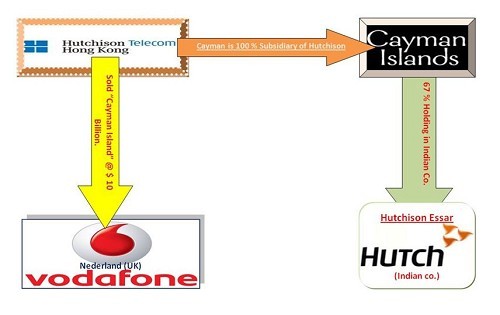 Facts of the Case:‘Hutchison (Hongkong)’ is a Non resident having no tax implications in India. ‘Cayman Island (Mauritius)’ was a 100 % Subsidiary of Hutchison (Hongkong). Hutchison Essar was an Indian co. in which Cayman Island (Mauritius) was holding 67 % shares and Essar had total holding of 33 % only. Mauritius is considered as a tax Heaven Country, So Cayman Island was incorporated for this transaction exclusively. Vodafone is a co. incorporated in Nederland (UK), treated as foreign co. in India.

Impact: As per Indian tax law, this transaction was not taxable in India, because Buyer and seller both were non resident of India and company sold (Cayman Island) was also a foreign co. Directly there was no tax implication in India for such transaction. In case of issues related to implication of  payment of TDS, a certificate from Chartered accountant is required, however it is recommended that if CA has any doubt he should take opinion of CIT But in given case No opinion of CIT was taken. Indirectly the controlling Interest of Hutchison Essar has been sold through this transaction. Because Cayman Island was only a paper co., which has no value in itself without controlling interest in Hutchison Essar (Indian Co.). Hutchison has sold shares of Indian co. in form of Cayman Island to Vodafone UK. But by this method they have saved capital gain taxes (Ought to be arisen in India) on such Transaction.

Game Begins Here: Assessing officer (Indian Income Tax Dept.) has issued a show cause notice u/s 201 to Vodafone for imposing penalty u/s 271C (Total demand of Rs. 11000 Crore) on non deduction of TDS u/s 195 for amount paid to Hutchison (HK).  Vodafone has not replied to that notice and filed a writ petition to challenge the ‘jurisdiction of Income tax Department’ for issuing such notice, before Mumbai High Court. Honourable Mumbai High Court has rejected their petition with cost. Then Vodafone has filed an SLP before Supreme Court against such rejection. Honourable Supreme Court has transferred the case to Income Tax department with specific instructions to examine Facts and determine that whether dept. had jurisdiction or not for issuing such notice. SC asks Vodafone to appear before Income Tax Dept in such case. The court also made it clear that if the I-T Department passes any order for penalty, it would not be enforced, till Supreme Court further decides the main matter of tax dispute.

Some Other Interesting Facts of this Case: Hutchison (Hongkong) is still not a party to any proceeding but the A.O. who has opened this case, has been promoted to Chief Commissioner of Income tax directly.

Law has been amended retrospectively to stop tax evasion by this method and thereafter Income tax Dept. Has opened more than 50 similar cases; Like- The revenue department is embroiled in a legal battle with US-based General Electric for its 60% stake sale in Genpact. Stakes was sold for $500 million in 2007. In another transaction, telecom major AT & T stake sale in Idea Cellular to the Tata Industries in 2005 has also been sent a tax notice. Internationally, US private equity fund Lone Star has faced tax hurdles in Seoul, Korea over its planned sale of Korea Exchange Bank to HSBC.

For getting all the required approvals from international bodies (ex SEC., FIPB etc), in all the applications and even in letter to shareholders, Hutchison (HK) and Vodafone has only shown that ‘we are seeking permission to transaction of Shares of Indian Co. (Hutchison Essar only)’. They didn’t even mention the name of Cayman Island Co. anywhere.

They may have taken another alternative also for tax evasion. As per India- Mauritius tax treaty, Capital gains arisen from transfer of shares of Indian co. being held by a Mauritian co. cannot be taxed in India. Assume, if Cayman Island could have been sold, shares held in Indian co. directly to the Vodafone, Then also capital gain arisen from this transaction cannot be taxed in India, as per DTAA provisions. Few countries like US are not signing any DTAA contracts with the countries having Tax heaven kind of laws just to avoid these type of transactions. Hutchison is liable to pay Capital gain tax, because there is no DTAA between India and Hongkong. But still Hutchison is out of purview for all legal proceedings.

Harish Salve is appearing for Vodafone before Supreme Court. 3 grounds under consideration in this case are ; Lifting of corporate veil, Transfer of underlying assets in India and Relinquishment of rights in India.

Few Questions which are still unanswered: Does asking a non-resident to comply with Indian legal procedures amount to Extra Territorial Jurisdiction? Can a company merely having a incorporation certificate of a tax heaven country and a few files in its office, should be allowed to evade taxes by various methods?  Can any co. seek relief as per DTAA even after making defaults? If income tax Dept. Is allowed to pass “Protective assessment order”, why not assessee can make “Protective Claims”?

On 4th AUG, 2011: Referring section 9 of the I-T Act, which defines Income deemed to accrue or arise in India, Vodafone said it does not mention any such transfer of control to be taxed. "Even the Indian firms which pay their dividends outside India are non-taxable under the Act,”.

On 5th AUG, 2011:  Vodafone told the Supreme Court that the Revenue Department cannot impose a Rs 11,000-crore tax relating to its acquisition of Hutchison Whampoa Ltd's Indian operations unless Parliament made a specific laws to impose capital gains tax on such deals.

The court also asked the IT department to return Rs 2,500 crore deposited by Vodafone, in compliance of its interim order, within two months along with 4 per cent interest.

"The government has no jurisdiction over Vodafone's purchase of mobile assets in India as the transaction took place in Cayman Islands between HTIL & Vodafone." Chief Justice S.H. Kapadia said.

The Income Tax department can file a review petition on the Supreme Court's judgement. Technically the government can go in for a review but I do not think this is a fit case for that because extensive hearings have already taken place.