Why bitcoin will never become a currency?


As humans, we all love challenges and the urge to know more never ends. The same thing happened when I first started reading about Bitcoins! It was a lot of overwhelming information that just blew my mind.

In the last article about Bitcoins, we discussed basic concepts and terminologies relating to bitcoins. But that was not all.

Before starting to invest and put money into Bitcoins, it is really important to understanding the value cryptocurrencies brings to the table.

Interestingly, if you talk to a bitcoin enthusiast for long enough, it won't take much time for them to convince you that it is the future of money.

Whether you believe it or not, but bitcoin can never be a currency.

What does it mean, if a 'currency' goes up in value, like bitcoin has, from $700 last year to more than $18000 today? Just a single coin can now buy 26 times more stuff than last year.

In other words, the price of all commodities has fallen in terms of Bitcoin since last year.

Now, you must be thinking, how this is a bad thing?

If earlier you could buy a television with a single coin, now you can buy a car with the same coin.

Or consume it to have a dinner at a restaurant when you know that its value might double not too far down the road?

Nobody wants to spend money that they think in no time will have more value, than what it has now - they definitely would want to reserve it for a later time. For which, I wonder whether it's real money at all.

At first, let us understand what is driving the rising prices and volatility?

Most importantly, it has to do with the fact that, bitcoin's mysterious inventor decided that there would only ever be 21 million of such coins. Only 21 million coins and nothing more than that.

This simple fact means that any increase in demand of bitcoin can send prices to the stratosphere, especially when everyone around you jumping into the market.

Because the only worse than being a fool and buying into a bubble is being the one greater fool who stays out and doesn't make any money at all.

Thus, in this narrative, the price rise is simply a reflection of the growing acceptance of bitcoin.

Another side of the coin is, that bitcoin has become a medium to buy into other cryptocurrencies also, that means if demand for any other crypto rises, the demand for bitcoin will rise automatically. That's another reason for an increase in its prices.

However, just because we call something a currency, it doesn't mean it becomes one.

To be currency, it has to be a stable store of value that people actually use to buy things with.

Bitcoin fails on both the conditions. Uncontrollable and Huge price volatility just made it a fuss in the market and nothing more than that.

Also, another thing to consider is that the number of bitcoin transactions are growing at very low pace - 33% percent every year. That's nowhere a skyrocketing growth for a technology that is going to become a global currency.

Interestingly, this is not only a failed currency, it is also a failed transaction system.

For this we have to understand, what happens when you transfer a bitcoin? 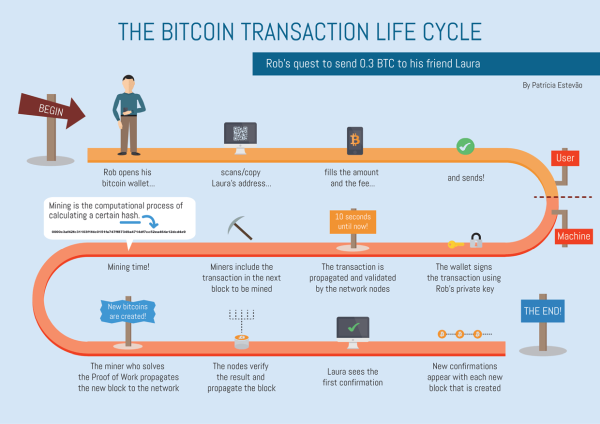 Every time you send a bitcoin, it is verified by a 'miner' who runs a computationally complex computer program and update the public record (blockchain) of every single bitcoin transaction.

As an incentive for this, the miner receives some bitcoins in return.

Howsoever simple it may sound, but actually it is a really complex structure and consumes more energy than your house does in a whole year. Yes, that much of energy just to verify a single transaction.

Bitcoin's limited bandwidth makes it hard for the network to handle even its limited number of transactions.

Lastly, cryptocurrencies might be the future; however, the initial implementations are found to be flawed in a number of ways.

An open question about Bitcoin is whether it sustain its momentum while adapting to address any imperfections that are found.

After all, it is always survival of the fittest.

Image Credits to their respective owners.