The Right Mark-up: A study on Transfer Pricing in Private Equity


The Marauders Map for TP Litigation?

To understand and analyse the Transfer Pricing issues related to foreign fund houses better, we looked at the litigation scenario of a few Indian affiliates ['the taxpayer(s)'] of top PE fund houses where judgements were pronounced in the year 2016 and 2017. From the data at hand, we found many similarities and have put together a path that many cases have traversed. 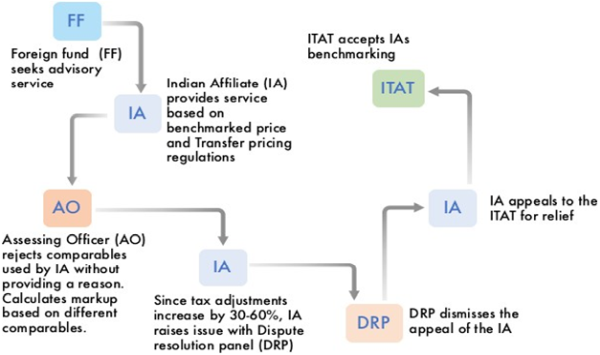 We observed that litigation of these Indian affiliates, amongst a few other issues, primarily comprised of disputes on pricing on benchmarking of the advisory services, where the tax authorities proposed to make upward adjustments (i.e. apply high mark-ups over the operating costs) in the range of 30% to 60% resulting in tax adjustments as high as INR 35 Crs to INR 37 Crs. 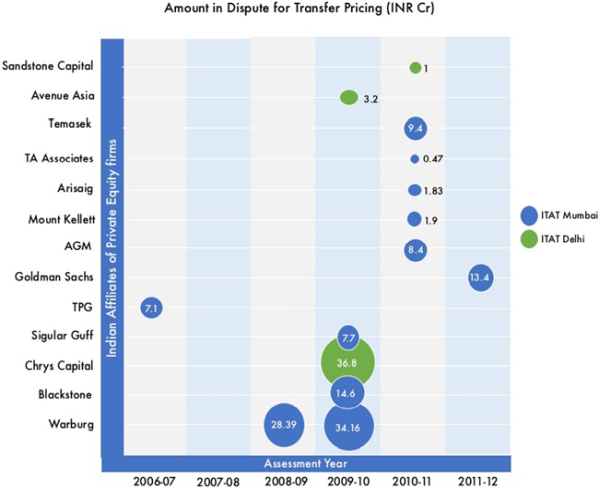 The tax payers, in most cases, chose comparables for benchmarking, based on the following factors:

It was interesting to note that in none of the cases, the tax authorities disputed the method (also known as the most appropriate Transfer Pricing method) for benchmarking the arms' length price.

The Venn diagram below will help us understand the approach adopted by Tribunals in respect of comparable entities for the Indian affiliates of the global fund houses: 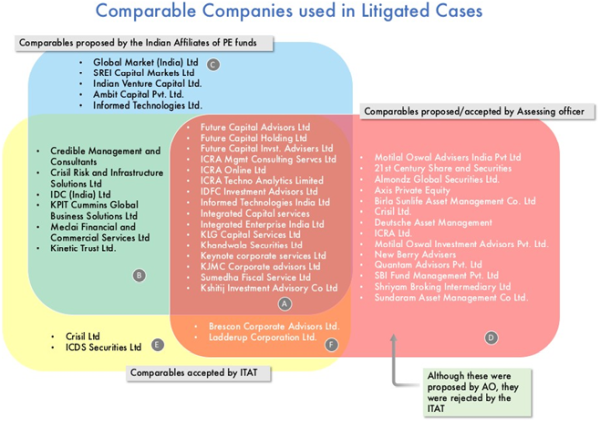 Judicial trend at the Tribunal level

The Tribunals in the cases for our analysis accepted the taxpayer's benchmarking analysis and held that the approach of the tax authorities failed the functional benchmarking principle (i.e. comparison of taxpayers' bbusiness functions to function of other companies having similar or identical practises within same or similar functions).

The trouble of the fund houses could be greatly mitigated if the tax department followed certain principles recognised by the Tribunals as given below:

The recurrent practice of the tax department to dispute position on comparable companies adopted by Indian affiliates of fund houses can be addressed by a detailed pronouncement of law by superior courts.

TThe tax department had appealed to the Bombay High Court against the order of Mumbai Tribunal passed in 2013 in the case of General Atlantic Private Limited. The question before the court was whether Carlyle India Advisors Pvt Ltd is a good comparable for General Atlantic Private Limited. The Court however steered clear of the contentious issues stating that the appeal raised questions of fact and not substantial questions of law. Given the volumes of pages that have been written by Tribunal judges on the applicable legal

principles for selecting comparables, the judgement of the Bombay High Court in General Atlantic (2016) can be viewed as a missed opportunity for an authoritative pronouncement on law.

A similar opportunity was presented before the Delhi High Court in the case of Avenue Asia Advisors where the company had preferred an appeal against a 2016 decision of Delhi Tribunal upholding inclusion by the tax department of Brescon Corporate Advisors Ltd, Ladderup Corporation Limited, and subject to certain conditions, inclusion of Sumedha Fiscal Services Ltd. Interestingly, this is the only case among the cases reviewed for this article, where the Tribunal substantially examined the contents of the advisory agreement between the Indian affiliate of Avenue Capital and its international associated enterprise.

The Tribunal had held that services offered by Avenue Capital's Indian affiliate could not be termed as a mere non-binding investment advisory service but such services also included advice on financing, restructuring and execution support akin to those provided by a merchant banker. By considering that broad functionality test is not sufficient to find comparable entities under TNMM, the Delhi High Court partly allowed (by an order dated 18 September 2017) appeal of the Indian affiliate of Avenue Capital.

The High Court went as far as to note that where Tribunal finds a line of activity which is not offered by a comparable (in this case advice in connection with rights issue), then it should not send that matter back to the tax department for a fresh consideration. It should simply reject that comparable. The High Court did not approve Tribunal's exercise of finding similarity based on presence of common terms like 'debt syndication', 'debt financing', 'restructuring', 'mergers', 'acquisition', etc in the annual reports of disputed comparables and the advisory agreement between Avenue Capital and its Indian affiliate. It held that non binding advisory provided in connection with any of the above will not render Avenue Capital's India affiliate as a merchant banker who actually undertake activities like syndication of debt.

However, the High Court still sent the matter back to CIT (Appeal) to take a final decision on whether advisory services offered by Sumedha, Brescon and Ladderup could be similar to the advisory services referred in the agreement of Avenue Capital.

A path to Transfer Pricing certainty

Below are a few critical steps that our data reveals, that might help in formulating a litigation strategy .

Documentation: A well-defined strategy, supporting pricing policies for transfer pricing analysis, would offer PE Fund and its Indian Associates, a first line of defence in the event of a tax audit, minimizing the harm to reputations, risk of costly adjustments and penalties that can be imposed in most jurisdictions absent such documentation. It appears that presence of certain terms in the advisory agreements between Indian affiliates and global fund houses may be giving rise to protracted litigation. The agreements can be suitably modified to bring them within the fold of advisory services as described by the Delhi High Court in Avenue Capital's case.

Advanced Pricing Agreements: To seek certainty and relief from strenuous litigation, few foreign fund houses have taken recourse to agreements called as the Advance Pricing Agreements or APAs between the taxpayer and the tax authorities for agreeing on substantive items like:

Research: Use of data mining through an advanced easy-to-use research database will help in deciding the tax strategies, pricing policies more efficiently by deriving substantial value from large litigation data.

Riverus is a legal research and analytics tool for income tax. We use modern technologies like machine learning to make your research experience fast and efficient. Using analytics, you can discover insights, construct a strategy, and mitigate risks.

The product enables tax professionals to draw valuable insight and information from more than 4 lakhs judgments and orders(reported + unreported) given by courts and tribunals.

Many accountants and lawyers in western countries use machine learning powered research tools today. It helps them provide better service, and build a more satisfied customer base. Not to mention the efficiency and time savings it brings in. Now, with Riverus, such technology is at your beck and call and you can use it to win more customers and delight the existing ones.