Secretarial standard on meetings of the board of directors

The Ministry of Corporate Affair (MCA) has issued circular Dated: 10th April, 2015 vide Letter No. 1/E/2014/CA/I and same has been notified in official Gazette on 23rd April, 2015. Secretarial standard are applicable on Companies from 1st July, 2015.

After elaborate deliberations, the Institute of Company Secretaries of India (ICSI) has prepared these standards, which have been approved by the Corporate Affairs Ministry. Compliance with the strict rules -- that would help strengthen corporate governance practices and help curb corporate misdoings -- would be ensured by company secretaries.

This Standard prescribes a set of principles for convening and conducting Meetings of the Board of Directors and matters related thereto.

According to ICSI, these standards would help boost investor confidence, particularly fund managers and overseas investors.

THESE STANDARDS, WHICH HAVE BEEN NOTIFIED, WOULD BE EFFECTIVE FROM JULY 1, 2015 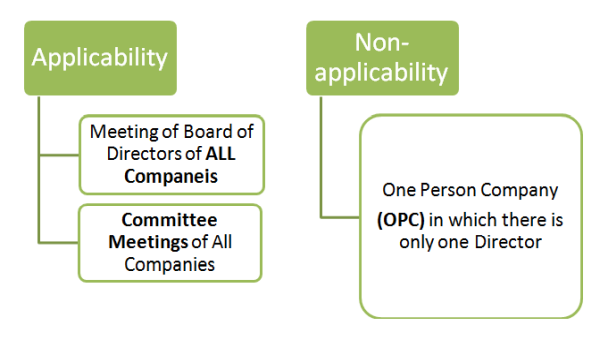 a. Calendar Year is 1st January and ends on 31st December

b. Registers and Records are permitted to maintain in “ELECTRONIC FORM”.

c. Minutes and Minutes Book are permitted to maintain in “ELECTRONIC FORM”.

a. Every Meeting shall have a serial number.

b. A Meeting may be convened at any time and place, on any day, excluding a National Holiday.

a. Companies now required to serially Numbered there Minutes of Board Meeting. If possible Companies should start serially numbered its Minutes from the First Board Meeting of Company.

b. Meeting can’t be called only on National holiday except this at any time at any place Company cal call Meeting of Board of Directors.

A. Notice, Agenda and Notes of Agenda:

Notice, Agenda and Notes of Agenda in writing of every Meeting shall be given to EV ERY DIRECTOR by following ways:

- By Courier or By facsimile or By Email or by any other electronic mode.

Address for the Notice, Agenda and Notes of Agenda:

a. Postal address or e-mail address, registered by the Director with the company; or

b. In the Absence of such details or any change thereto, on the addresses appearing in the Director Identification Number (DIN) registration of the Director.

c. If director specify the way of delivery of Notice, Agenda and Notes of Agenda, same shall be given to him by such means.

Responsibility to Issue of Notice, Agenda and Notes of Agenda:

a. Notice, Agenda and Notes of Agenda shall be issued by the Company Secretary or

b. Where there is no Company Secretary, any Director or any other person authorized by the Board for the purpose.

c. Proof of sending Notice and its delivery shall be maintained by the Company

Specification of Notice, Agenda and Notes of Agenda:

The Notice, Agenda and Notes of Agenda shall specify the Serial Number, Day, Date, Time and Full Address of the venue of the Meeting.

Time Period for Issue of Notice, Agenda and Notes of Agenda:

a. Notice, Agenda and Notes of Agenda convening a Meeting shall be given at least SEVEN days before the date of the Meeting, unless the Articles prescribe a longer period.

b. In case the company sends the Notice, Agenda and Notes of Agenda by Speed Post or by registered post or by courier, An Additional Two Days Shall be Added for the service of Notice.

To Whom: Shall be given to all Directors including those who did not attend the Meeting on the originally convened date and

Notice, Agenda and Notes of Agenda to Alternate Director:

The Notice, Agenda and Notes on Agenda shall be sent to the Original Director also at the address registered with the company, even if these have been sent to the Alternate Director.

Note of Agenda shall include the following:

a. Details of the proposal.

b. Relevant material facts that enable the Directors to understand the meaning.

c. Scope and implications of the proposal.

d. The nature of concern or interest, if any, of any Director in the proposal, which the Director had earlier disclosed.

***Where approval by means of a Resolution is required, the draft of such Resolution shall be either set out in the note or placed at the Meeting.

- May be circulated at the Meeting; or

-  May be circulate prior to the Meeting

But shall be taken up with the permission of chairman (+) with the consent of Majority of Directors present in the Meeting. (Majority of directors include at least one Independent director, if any)

***DISCUSSION ON ANY OTHER MATTER IN MEETING:

Any item not included in the Agenda may be taken up for consideration with the permission of the Chairman (+) with the consent of a majority of the Directors present in the Meeting, which shall include at least one Independent Director, if any.

In case of Absence of Independent Director:

The Minutes shall be final only after at least one Independent Director, if any, ratifies the decision taken in respect of such item.

In case of Company doesn’t have Independent Director:

Example: If Majority of Directors are present in the Meeting and same has been approved by them then no ratification required.

CALLING OF MEETING ON SHORTER NOTICE:

To transact urgent business, the Notice, Agenda and Notes on Agenda may be given at shorter period of time than stated above,

a.  if at least one Independent Director, if any, shall be present at such Meeting.

a.  Notes of Agenda: May be given at a shorter period of time than stated above, with the consent of a majority of the Directors, which shall include at least one Independent Director, if any.

b.  General Consent: Company can take consent of Director in the first Meeting of the Board held in each financial year regarding shorter notice of Notes on items of Agenda which are in the nature of Unpublished Price Sensitive Information

c.  Consent Before placing of Such Item: If general consent not taken then the requisite

d.  Consent shall be taken before the concerned items are taken up for consideration at the Meeting.

Meetings of the Board of Directors:

(Except Small Company, One Person Company and Dormant):

· The Board shall meet at least once in every calendar quarter.

· At least 4 (four) Board Meetings in a calendar year.

Note: In case of Newly Incorporate Company “First Meeting” should be held within 30 days of Incorporation of Company.

Meetings of the Independent Directors: