Provisions of charge given under Co. Act, 2013


Definition of Charge: As per Section-2 (16) Charge means- An

a. interest or lien
b. created on the property or assets of a company or
c. any of its undertakings or both as security and includes a mortgage;

PROVISIONS OF CHARGE GIVEN UNDER CHAPTER VI OF COMPANIES ACT 2013 COVER THE SECTION- 77 – 87.

NEED FOR CREATING A CHARGE ON COMPANY’S ASSETS:

Almost all the large and small companies depend upon share capital and borrowed capital for financing their projects. Borrowed capital may consist of funds raised by issuing debentures, which may be secured or unsecured, or by obtaining financial assistance from Financial institution or banks.

The financial institutions/banks do not lend their monies unless they are sure that their funds are safe and they would be repaid as per agreed repayment schedule along with payment of interest. In order to secure their loans they resort to creating right in the assets and properties of the borrowing companies, which is known as a charge on assets. This is done by executing loan agreements, hypothecation agreements, mortgage deeds and other similar documents, which the borrowing company is required to execute in favour of the lending institutions/ banks etc

Type of Charges to be registered:

Old Act: Section 125 specifies only 9 types of charges to be registered.

New Act: Section 77 states that Companies are required to register ALL TYPES OF CHARGES, with ROC within 30 days of its creation.

For Creation of Charge Form CHG-1 will be filed with fees prescribed under Act. Form should be signed by the Company and the Charge-holder and should be filed together with instrument creating charge.

Additional period to register the Charge:

Section 77- ROC may on application by the company, allow the registration of charge within 300 days (30 days + additional period of 270 days). If form will file after 30 days then form will file with additional fees.

Application to be supported by a declaration in Form CHG-10 from the CS or Director that such belated filing will not adversely affect the rights of any creditors of the company.

DUTY OF REGISTRATION OF CHARGE:

i. As per Section 77 it is duty of Company to Create charge.

But before filling of form person will give 14 days’ notice to Company. If company doesn’t register the charge or show sufficient cause then person himself will file the form with ROC.

This is not responsibility of Person (in whose favour charge is created) to file form. Therefore if company fail to file form for registration of charge and person also not filed form then person will not liable to pay any penalty.

CERTIFICATE OF REGISTRATION OF CHARGE:

Time Limit for filling for Creation of Charge 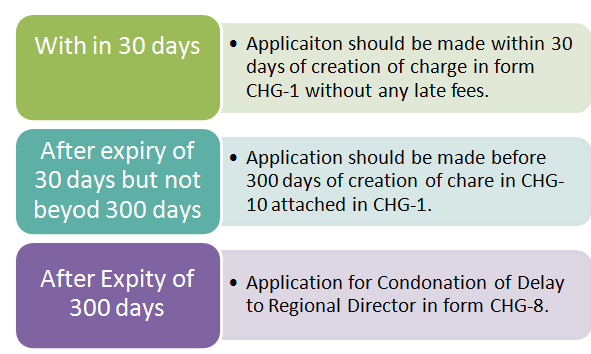 Condonation of delay for Registration of charge:

i. Where the instrument creating or modifying a charge is not filed within a period of Three Hundred Days from the date of its creation or modification the Registrar shall not register the same unless the delay is condoned by the Central Government.

ii. Where the instrument satisfaction of the charge is not filed within Thirty Days from the date on which such payment of satisfaction, the Registrar shall not register the same unless the delay is condoned by the Central Government.

iii. The application for condonation of delay shall be filed with the Central Government in Form No.CHG-8 along with the fee. [ By Notification F. No. 1/6/2014-CL.V Dated: 21-5-2014 THIS POWER HAS BEEN DELEGATED TO REGIONAL DIRECTOR)

iv. The order passed by the Central Government under sub-section (1) of section 87 of the Act shall be required to be filed with the Registrar in Form No.INC.28.

Any modification in the terms or conditions or the extent or operation of any charge registered under that section also required registration.

**WHETHER FUNDED INTEREST IS MODIFICATION OF CHARGE?

Solu: In Andhra Pradesh State Financial Corpn v. Guruvayurappan Swamy Oils, appellant financial institution had created charge over properties of company-in-liquidation in respect of principal amount plus interest. Some of the interest was kept in a separate account called “Funded Interest Account”. Hence, there is no modification of charge required to secure such funded interest.

CHARGES FILING OF WHICH WITH ROC IS NOTE NECESSARY:

a. Guarantee doesn’t require Registration.
b. Loan Against Fixed deposit receipt
c. Charge created by operation of law need not be filed
d. Negotiable Instrument (Hundi) is not a ‘Charge’ and registration not required.

Pledge is not required to be filed for Registration:

Official Liquidator V. Viswanathan case: It was held that charge, being pledge, is not required to be registered, In winding up, the pledge is not treated as creditor. He is at liberty to issue necessary statutory notice to sell the pledged property.

Effect of registration of charge:

C. Deemed Notice:** Any person intending to lend moneys or who has lent money to a company can know which of company’s assets are already charged and extent to which type are charged.

Penalty for not filing charges:

Effect of non registration of charge:

As per Section 77(3) If charge is not registered with ROC, the charge shall not be taken into account by the liquidator or any other Creditor. [The words are Registered’ and not ‘filed’. Thus, mere filing of charge with Registrar would not be sufficient. It has to be actually registered by ROC and certificate of registration should be issued.

However, this is so only if company is under winding up. Otherwise, contract or obligation for repayment of the money secured by charge is there even if charge was not registered. 77(4)

REGISTER OF CHARGE BY COMPANY:

a. Every company shall maintain, at registered office a register of charge in form No. CHG-7.

b. Copy of the instrument creating the charge shall also be kept at the registered office of the company along with register of charge- (Proviso of Section 85(1)

c. The entry in the registered authenticated by a director or secretary of the company or the other person authorized.

d. **Company will maintain this register for life time of Company.

e. ** Instrument creating charge or modification of charge shall be preserved for a period of 8 year from the date of satisfaction of charge by the Company.

Inspection of register of charge: Section-85

Process of Creation/ Modification of charge is as under:-

• Conduct a Board meeting to arrive at a positive decision to avail the facility including security of Charges. In the said business of availing facility, authority to execute necessary documents is also required to be given.

• File extracts of the said resolution with the Registrar of Companies in form MGT 14 within 30 days of its passing.

• Execute necessary documents for availing the facility including the security being given.

• Make entries in the register of Charges maintained in form CHG-7 forthwith after the creation/ modification/ satisfaction and get it authenticated by Director or Secretary of the company or any person authorized by the board.

• If CHG-1 (for other than debentures) or Form CHG-9 (for debentures including rectification) is after 300 days, prepare an application for condonation in form CHG-8 and submit the same with Regional Director having territorial jurisdiction over the registered office of the company under The Companies Act, 2013.

• Pay the requisite penalty imposed by the Regional Director having territorial jurisdiction over the registered office of the company. Normally 15 days time is being given for the payment of penalty.

• After payment of requisite penalty, submit the Chalans with Regional director office with the covering letter containing request to issue and order allowing condonation of delay.

• Submit the order issued by the regional director with the ROC within the stipulated time given in the order itself in form INC 28.

Process of Satisfaction of Charge is as under:-

• Gets the letter of satisfaction from the bank containing declaration that there are no dues towards the facility provided.

• Make entries in the register of Charges maintained in form CHG-7 forthwith after the satisfaction and get it authenticated by Director or Secretary of the company or any person authorized by the board.

• Submit form CHG-4. After due compliance, Registrar shall issue certificate of registration of satisfaction in form CHG-5.

• If CHG-4 is not being submitted within the period of 30 days, prepare an application for condonation in form CHG-8 and submit the same with Regional Director having territorial jurisdiction over the registered office of the company under The Companies Act, 2013.