Merger and acquisition activity has grown significantly in the past few years. The world has recently witnessed some of the largest M&A deals -  notable ones being Facebook - WhatsApp, Dell - EMC, AT&T Inc - DirecTV, Microsoft - LinkedIn, Charter Communications - TWC Cable, Capegemini - IgateCorporation etc. So, why the enthusiasm for mergers and acquisitions? Surveys of senior executives have found a fairly consistent set of motivations, the primary being to create and exploit synergies. Unfortunately, a great majority of mergers and acquisitions fail to achieve their hoped-for benefits and create shareholder value mainly because companies pay insufficient attention to post-merger integration (PMI). PMI is critical to realizing the value of a deal. It’s also highly complex, taking place under severe time pressure and in parallel to running the core business. Although each PMI is unique, successful PMIs take a three-phased approach and follow eleven common steps to ensure that organizations gain the value they expect from M&A. This article intends to throw light on the aforesaid steps and demystify the secret to PMI success.

It is widely accepted truth that roughly half of all mergers and acquisitions (M&A) fail to create shareholder value and that about one-quarter actually destroy it. It is also no secret that there are tried and tested methodologies for successfully integrating companies. So why do so many deals - especially those that appear to offer substantial cost and revenue synergies - produce such disappointing results?

The answers are of course complex. Mergers and acquisitions vary widely along a number of dimensions: company size and diversity; industry characteristics; overlap of products, markets, and customers; prior mergers and acquisitions experience of the parties; whether the takeover was hostile or friendly; relative performance strength of the acquired firm; and how much assimilation is desired or required. The success of any merger depends almost entirely on an effective post-merger integration (PMI) process, yet crafting a long-term integration plan is one of the most challenging stage of the overall M&A process. Four of the most cited reasons for deal failure relate to PMI: poor integration, high complexity, difficult cultural fit, and low synergies. One of the biggest pitfalls is that companies tend to treat PMI as a mechanical process that occurs after the deal is done. Also, PMIs are often treated as a one-size-fits-all process. Yet each PMI will have its own speed, style, focus, and rhythm. The PMI process must be tailored to account for those differences. As an example, a merger driven by cost synergies will require a very different strategy than one in which achieving revenue synergies is the main goal. 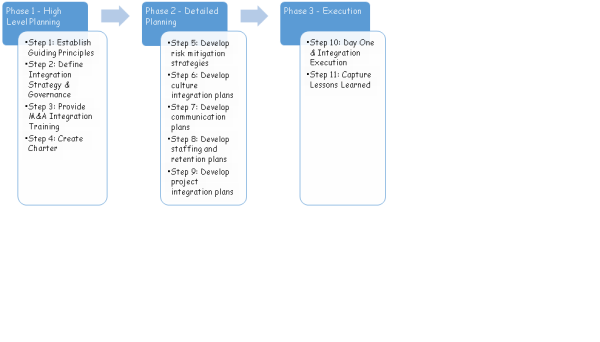 Before the integration process begins, senior management should establish a set of M&A integration principles that will help direct employee actions. Explicit guidance on integration fundamentals gives the workforce a collective sense of purpose and priorities. If people are left to figure things out on their own by inference or conjecture, they are more likely to delay decisions or make poor ones. There is no one “school solution,” for merger integration but a proven set of ground rules can dramatically improve your odds for merger success.

Just as people can be challenged to perform better when they are confronted with more demanding expectations, they also are motivated to upgrade performance when they are given a clear sense of direction.  The acquirer who steps forth promptly to structure integration goals for employees provides a crucial focus for organizational resources. Many of the conventional problems associated with mergers and acquisitions are a direct offshoot of people going off on tangents, operating in a fog, or essentially shifting into neutral for lack of well-defined targets. Newly merged or acquired organizations need road maps with well-charted routes and specific destinations.  But it is very common for employees to muddle around for a year or more before they finally figure out what is going on and where the new company is headed. It should be clearly communicated to what extent the target company will be integrated. Integration matters more in some types of mergers than others, and it matters more in some functions than others, depending on the rationale behind the deal. Before a merger is closed, the integration strategy, processes, and the responsibilities of the teams should be well defined and clearly articulated.

Integration team members, managers and employees in the acquired or soon-to-be acquired organization should undergo professional training in merger integration best practices. While it is true every deal is different, the underlying processes (i.e. prioritization, scope change, culture change, risk management, communication, synergy program management and reporting) required for success are the same from one integration to the next.

The first deliverable created by an integration team is a charter.  It specifies the purpose, deliverables, success criteria, budget, and schedule for the team. It is a simple document designed to clearly outline the “who, what, and how” elements of an integration and gain commitments from resource owners in advance.A clear charter reduces the possibility of scope creep, one the most common afflictions of integrations. Scope creep occurs when activities are added little by little to the project until original timelines, numbers, and objectives are no longer viable. The boundaries for integration work should be clearly defined in an integration team charter so that the overlap of responsibilities is minimized and efficient coordination among functions is fostered.

Growth through M&A is a high-stakes game.The element of risk adds to the drama, excitement, and overall appeal of the merger game. But as always, where there is much to be gained, there is precipitous downside risk as well. M&A advisors working on contingencies tend to over-emphasize the upside of every deal. Unfortunately, one plus one sometimes equals less than two. Every merger will have some negative synergies such as turnover of key talent, sales losses, incompatible systems, productivity declines, turf battles, cultural friction. Acquirers should think ahead, identify risks, determine their size and likelihood, and develop plans to eliminate or mitigate the major ones.

Every organization has its own culture-the set of norms, values and assumptions that govern how people act and interact every day. It's "the way we do things around here." One of the biggest challenges of nearly every acquisition or merger is determining what to do about culture. Usually the acquirer wants to maintain its own culture. Occasionally, it makes the acquisition in hopes of infusing the target company's culture into its own. Whatever the situation, commit to the culture you want to see emerge from the integration, talk about it and put it into practice.

M&A communication planning is difficult because a merger is always a fast-breaking story.  Every day brings new developments. The truth is a moving target, and often dead on arrival. Communication planning requires much more thought in a merger than it does during more stable, less stressful circumstances. Yet, most key managers receive little education on what to say, and just as importantly, what not to say. There is little opportunity for them to make an insignificant remark. Practically everything they communicate is taken seriously, studied for innuendo, or held up to the light for subtle implications.A well-crafted communication plan can help reduce employee anxiety and cynicism, protect the acquirer's credibility, and prevent top management from being accused of reneging on its promises.

Staffing and retention plans in M&A - the decisions regarding who goes, who stays, and who is in charge help determine the future direction of the business and the workforce’s views on what the new organization values. Organizations routinely suffer a loss of identity upon being acquired and with that loss comes an erosion of employee commitment. Motivation deteriorates as people’s sense of “my company” fades and blurs, making it harder for them to maintain an emotional attachment to the organization. Also, personal ties to upper-level managers may be severed as those people leave the scene, eliminating important personal loyalties that previously generated strong motivational forces.Uncertainty, feelings of loss, and fear of change are demotivating. The best antidote for these ailments is powerful on boarding.

An M&A integration plan is a document (or set of documents) outlining exactly how and when major resources, assets, processes, and commitments of the acquiring and acquired companies will be combined in order to achieve the strategic goals of the deal. Acquirers should follow a proven M&A integration planning methodology to define the integration steps and activities so that people in both organizations can see the work ahead as logical and achievable.  The clarity from a carefully crafted M&A integration plan helps align expectations and replace employee skepticism with optimism.

Executing an acquisition integration plan is certainly one of the most difficult assignments one can face in the corporate world. Managing a merger, regardless of size, is distinctly different from managing an ongoing operation. The first step one can take toward being an effective M&A integration manager is to understand what mergers represent in the life cycle of an organization. As a method of corporate growth, they are revolutionary rather than evolutionary. And it is important to recognize that uncommon growth calls for uncommon solutions. This often means managing the transition in a fashion that seems counter intuitive or completely different from established organizational norms.Most companies over-complicate their acquisition integrations by trying to improve things for improvement's sake. They fail to ruthlessly prioritize and as a result, they tackle too much simultaneously. This can lead to a sense of chaos and confusion that frightens people and leaves them unsure of what to do next. The key is to figure out the critical value drivers of a deal and stay focused on those “critical few” without being distracted by the “screaming many.”Particularly during the early stages of an acquisition, it’s a priority to produce financial synergies. That speaks volumes to the workforce, because for a lot of those people, the jury will still be out regarding whether it’s a good merger or a bad one. If the company’s financial condition begins to deteriorate, employees typically point to that as hard evidence that something about the merger was bad to begin with or is beginning to go sour.

With each transaction, companies become more familiar with the merger and integration process. Successful serial acquirers take time throughout each phase to debrief on lessons learned about the process itself. They capture ideas for improvement and action items to accomplish them, creating efficiencies in future transactions. Mistakes should be identified and documented so they are not repeated in the future. Acquirers can help protect their future deals by learning lessons not only from their mergers, but from others as well.

A PMI is a race to the finish line. And yet, in some respects, the task of integration is never completely over. After the formal integration process is concluded, take a step back and perform a post - PMI audit in order to assess how the organization has done and how it can do better in future.

Financial Audit: Are you on track to hit your planned targets? How do your results compare with the estimates generated during valuation and due diligence or with the commitments you made to investors?

Organizational Audit: What is the extent and quality of coordination and interaction among the organization’s units? How well are the new interfaces functioning?

Engagement Audit: How motivated are your employees? Are there pockets of relatively poor morale and, if so, why? What are the root causes?

Successful M&A: The Method in the Madness.
Boston Consulting Group