The Companies Bill 2012, passed by the Lok-Sabha introduces a new form of Company by the name of “One Person Company” (OPC). Its concept is parallel to the existing concept of Sole-proprietorship whereas it shall be recognized as separate legal entity distinct from its promoter and proprietors. This form is already prevalent in some of the developed countries in the world namely, China, USA, Singapore, and many countries in Europe and shall pave its way in India after bill is passed by Rajya- Sabha.

What is One Person Company?

Section 2(62) of the bill defines One Person company as the name suggests, it means a company which has only one person as a member and where legal and financial liability is limited to the company only and not to that person. (i.e. liability is limited). This paradigm shift from the existing concept of Companies Act, 1956 where minimum two members are requires floating private as well as public company.

Status: Section 2(68) of The Bill provides for the definition of privation company to include OPC. This implies that all the provision of the Act applicable to private company shall also be applicable to OPC unless otherwise excludes from the compliance. Also sec. 3 of The Bill, further clarifies the fact that OPC shall be treated as private company for all legal purpose with only one member.

Name clause:  The Name of Company shall include word OPC ‘One person Company’ within bracket below the name of the Company, wherever its name printed, affixed or engraved.

Eligibility for the formation of OPC:

Although the exact rules are not clear, the following rules have been proposed –

a. Firstly, the person is to give a separate name and legal identity to the Company, under which all the activities of the business are to be carried on. This ensures that a separate legal entity is formed.

b. Secondly, Section 3 of The Act, provides that at the time of incorporation of OPC, the memorandum of OPC shall include the person has to nominate a name with that person’s written consent as a nominee to the OPC. This person will be the default and ad hoc member in case of the existing sole member’s death or disability. The consent of nominee shall be in prescribed written format and shall also be filled with Registrar along with MOA & AOA.

d. On the death of member, nominee have title to all the shares and entitle to same rights and divided to which sole member  of company was entitle or liable, on becoming member such nominee will nominate other person as nominee with his consent.

Relaxation given to OPC

Number of Directors: Although bill restricts number of director one in case of OPC, there is no constraint to recruit more than one with subject to maximum 15.

Board Meeting/ AGM:  If there is only one director, there is no such compulsion to conduct Board Meeting. In case of more than one director, at least one board meeting twice in the year and gap between two meetings would not be less than 90 days. Notice, Quorum, passing of resolution made applicable to OPC also.

Section 122(1) provides that the provision of section 98 and section 100 & 111(inclusive) are Not APPLICABLE to OPC, i.e. Provision related to General meeting, Extra-Ordinary General meeting, Notice convening to general meeting is not hold good for the company.

Alternative if business which is required to be transacted at GM & AGM by means of ordinary or special resolution it shall be sufficient if the resolution is communicated by sole member to company and note it down in minute’s book and signed and dated by the member, it shall  be consider as effective date.

Due date of filling Return: U/s 92(1) OPC shall required filing with Registrar of companies, a copy of financial statements, along with form 23AC, 23ACA, and 20B within 180 days from closure of financial year except form 60.

Contract by One Person Company:

Where One Person Company limited by shares or by guarantee enters into a contract with the sole member of the company who is also the director of the company, the company shall, unless the contract is in writing, ensure that the terms of the contract or offer are contained in a memorandum or are recorded in the minutes of the first meeting of the Board of Directors of the company held next after entering into contract:

The company shall inform the Registrar about every contract entered into by the company and recorded in the minutes of the meeting of its Board of Directors under sub-section (1) within a period of fifteen days of the date of approval by the Board of Directors.

According to company experts, the step will help in bringing the unorganized sector of proprietorship in to the organized version of a private limited company. This will open the avenues for more favorable banking facilities, especially loans to such proprietors.

With this number of small and medium enterprises will enter into the corporate domain. This will help in boosting foreign funds to Indian market also.

Under the option, an OPC could be formed by subscribing the name of person to the memorandum and complying with the requirements of the Act in respect of registration. 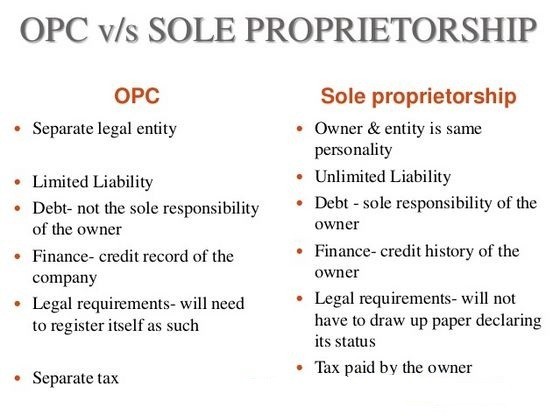