"Nidhi" means a company which has been incorporated as a Nidhi with the object of cultivating the habit of thrift and saving amongst its members, receiving deposits from, and lending to, its members only, for their mutual benefit, and which complies with the rules made by the central Government for regulation of such class of companies.

How it is different form NBFC - Public Limited Companies involved in taking deposits and lending to its members. The activity of a Nidhi Company does fall under the purview of Reserve Bank of India. It deals only with shareholder-members money. RBI has exempted Nidhi Companies from the core provisions of the RBI and other regulations applicable to a NBFC except the provisions with respect to Interest rate payable on deposit.

A Nidhi is a Public company and shall have a minimum paid up equity share capital of Five lakh rupees. Nidhi shall not issue preference shares. At the time of incorporation, there shall be minimum of 3 Directors and 7 members. Name of the company ends with the word “NIDHI LIMITED”

However, within a period of one year from the date of its incorporation every Nidhi Company shall ensure that it has:

If a Nidhi is not complying with clauses (a) or (d) mentioned above within one year from the date of incorporation, it shall within 30 days from the closure of first financial year file NDH-2 with the Regional Director for extension of time.

If the failure continues after the extended time limit, Nidhi shall not accept any further deposits till it complies with the said requirements and gets itself declared as Nidhi, besides being liable for penal consequences as provided in the Act. 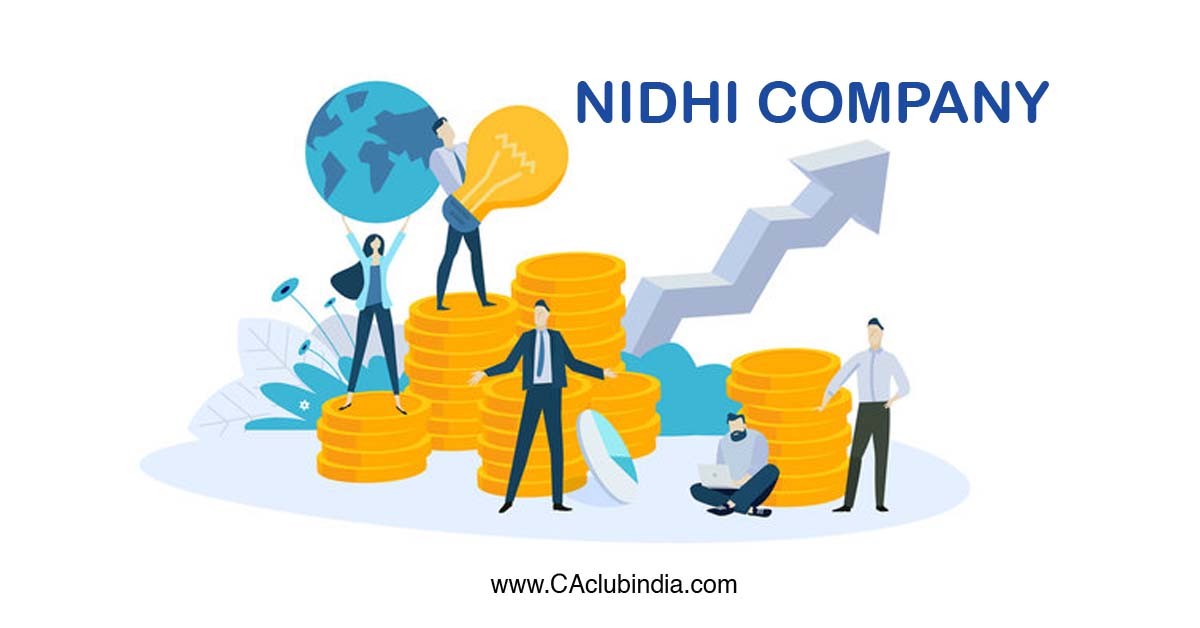 1. The director shall be a MEMBER of Nidhi.

2. He shall hold office for a term up to 10 consecutive years on the Board. He shall be eligible for re-appointment only after the expiration of 2 years ceasing to be a director.

3. Where the tenure of any director in any case had already been extended by the Central Government it shall terminate on expiry of such extended tenure.

4. The person to be appointed as a Director shall furnish his Director Identification Number and a declaration that he is not disqualified to
become a director and shall not have been disqualified as provided in Section 164 of Companies Act, 2013.

Pursuant to section 164 (1) A person shall not be eligible for appointment as a director of a company, if -

(a) he is of unsound mind and stands so declared by a competent court;

(b) he is an undischarged insolvent;

(c) he has applied to be adjudicated as an insolvent and his application is pending;

(d) he has been convicted by a court of any offence, whether involving moral turpitude or otherwise, and sentenced in respect thereof to imprisonment for not less than six months and a period of five years has not elapsed from the date of expiry of the sentence:

Provided that if a person has been convicted of any offence and sentenced in respect thereof to imprisonment for a period of seven years or more, he shall not be eligible to be appointed as a director in any company;

(e) an order disqualifying him for appointment as a director has been passed by a court or Tribunal and the order is in force;

(f) he has not paid any calls in respect of any shares of the company held by him, whether alone or jointly with others, and six months have elapsed from the last day fixed for the payment of the call;

(g) he has been convicted of the offence dealing with related party transactions at any time during the last preceding five years; or

(h) he has not allotted the Director Identification Number

(i) he is already holding directorship in 20 companies

Further, Person who is or has been a director of a company which -

(a) has not filed financial statements or annual returns for any continuous period of three financial years; or

(b) has failed to repay the deposits accepted by it or pay interest thereon or to redeem any debentures on the due date or pay interest due thereon or pay any dividend declared and such failure to pay or redeem continues for one year or more, shall not be eligible to be re-appointed as a director of that company or appointed in other company for a period of five years from the date on which the said company fails to do so. Provided that where a person is appointed as a director of a company which is in default of clause (a) or clause (b), he shall not incur the disqualification for a period of six months from the date of his appointment.

Secrets Of Peak Performers Who Do Wonders