The world economy is set to slowdown in 2015 followed with extensive pressure on currency across the globe and to end up with asset bubbles going for blow up. Japan has declared that its economy is in recession, China is already under slow growth, Europe is struggling with its austerity measures and US is less to be relied on growth. Among all these low crude prices has killed the remaining part of the world economic growth.The recent ratings of Russia was very much expected in the lines but we should be expecting some more as major oil producing countries are taking the hit over the low crude prices. In my previous I depicted that losses of the exporting countries and where countries like India are going to stand when their will be slow down in these exporting countries of India. Global unemployment is also going to increase and the biggest blow would come to the new comers who will be finding difficulty in getting job as budgets would be reduced by the oil producing countries and exporting the same.
Investments drying down…Debt becoming a challenge
Unemployment is linked with investments, but the recent low crude prices and further expectation of fall from here have already created bankruptcy alarm for many crude producing countries. Investments have dried up as the time lag for the investments and the crude production become killing aspect when the crude prices are low. This increases the cost of debt by double as the current debt becomes a burden further the new debt becomes a challenge. The current Debt to EBIDTA is clearly reflecting the US crude producing company’s current status: In 2010, U.S. companies focused on producing oil and gas had $128 billion in combined total debt, according to financial data collected by S&P Capital IQ. As of their latest quarter, such companies had $199 billion of combined total debt. The group doesn’t include Exxon Mobil Corp. and Chevron Corp.  which also make money from refining, chemicals and pipelines. If we add all these numbers of these companies the deficit grows by few more billions. Further during 2008-09 crisis when crude prices came down globally due to lackluster demand middle east and many economies did extensive investments in crude production to revive the investment climate.  Hence when crude prices touched the level of $100/ barrel during 2010-11 don’t think that all the major oil producing countries made windfall profits as they have already deployed the capital for investments. Hence new investments are next to dead. 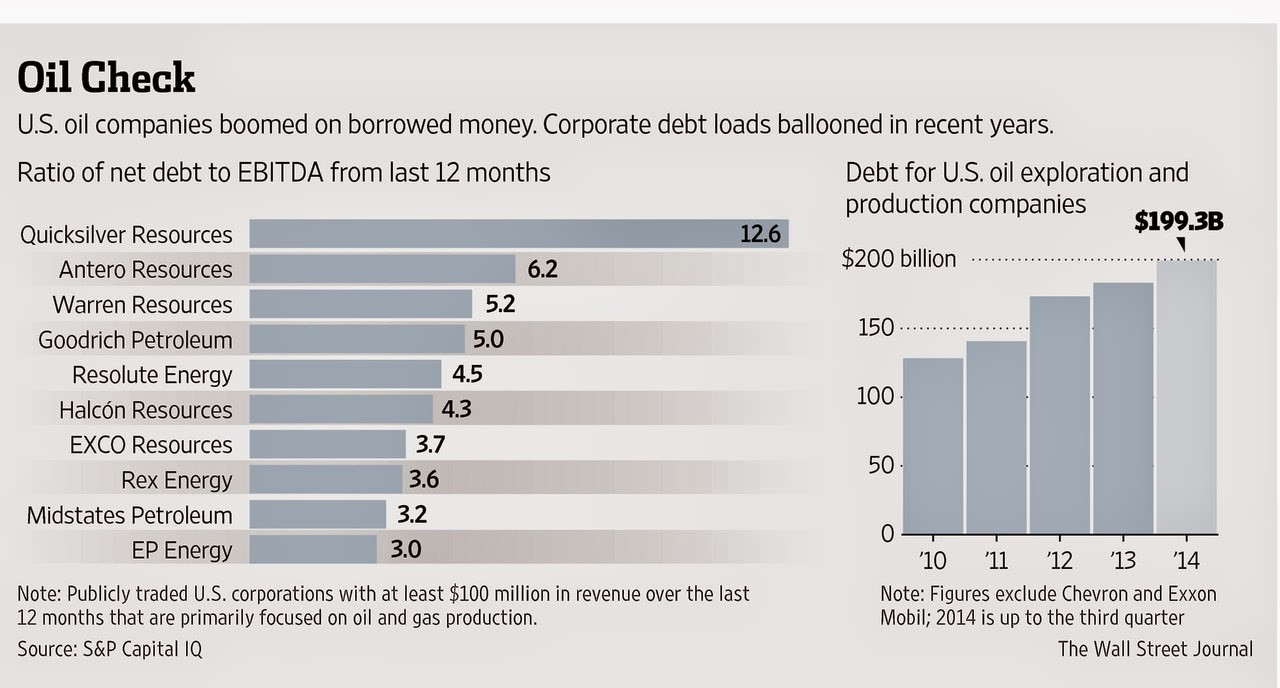 Average cost of production …who take the Hit
The cost of production is now turning out to be a loss as many oil companies have huge capex capitalized over several years. Further operational cost of the oil producing companies is also too high. All these cost makes the production to be high hence a price above $ 60 or $75 per barrel is required. Now when bankruptcy has started which means that no employment opportunities simultaneously slow growth for these economies. Russia, with 10.6 million barrels a day in October according to government statistics, and oil there costs between $50 and $52 a barrel to pump. US is having a cost of production ranging from $40 a barrel in the Eagle Ford Shale to $80 a barrel in North Dakota and $82 in the Permian Basin where as in Canada, where oil ranges from $46 to $90 a barrel. Hence US is already at a bubble. Further in my previous articles about the junk bonds issue by the US crude producers have turned to be a bubble getting burst in slow mode.http://www.ianalysis.co.in/2014/12/asset-bubbles-to-explodejunk-bonds-of-us.html.The Middle east is in the best position in terms of cost of production. Saudi Arabia has the world’s lowest cost of production at $10 to $25 a barrel, according to a Scotiabank Equity Research and Scotiabank Economics report published in November. Other OPEC countries need more money to cover costs ranging from $15 to $30 a barrel. But we did not take the cost of running the budget of an economy. If we add that the current average price of global crude production which is $50 a barrel stands very high when cost of running the economic budget gets added.
Unemployment grows….which slows the world GDP growth
According to an assessment from the Federal Reserve Bank of Dallas, an estimated 250,000 jobs across eight U.S. states could be lost in 2015 if oil prices don’t rise. More than 50% of those job losses would occur in Texas, which leads the nation in oil production. The ancillary industries linked with OIL RIGS are also going to get hit as demand for the products are drying up hence a significant cut down in production ,mass layoff and slow growth. Less drilling will not only lead to a loss of jobs for oil workers, but the services that pop up around drilling sites – restaurants, bars, construction, and more – are feeling the slowdown as well. Companies have sprung up during the shale boom to build metal, machinery, pipes, electrical equipment, chemicals, and other support services. All these are on the path of getting closed. In Russia-western sanctions over the crisis in Ukraine and a more than 40% decline in the price of oil, Russia's key export, which has dragged the ruble down 45% against the U.S. dollar this year. Inflation is soaring as the plummeting ruble raises the price of imports, and Russia's ban in August on select food imports from the U.S. and EU  has further pushed up food prices. On the reversal side these economies are not finding production of food items to be feasible hence cut in production in US and EU is already began-which adds fuel to the slow growth of the world GDP. As inflation climbs and companies cut spending, Russians' real wages declines. In short we unemployment is slowing and silently growing.
The ratings of the Debt….Crisis spills to Currency:
The difficult part of the current status of the global market is that all these oil producing countries have foreign exchange based investments. Now with the scenario the debt burden and new rating given by Fitch, S&P, Moody etc are going to push up the cost of borrowing and sharp depreciation of the local currencies.  This will spook inflation for commodities despite of not having much demand of the same. The Russian government has about $150 billion of debt it needs to redeem in 2015, much of which is foreign held. Sanctions now bar many state-owned Russian credit institutions from borrowing long-term money from Western capital markets. Russian firms are scrambling to repay or restructure the terms of foreign currency loans. Further according to the reports form Fitch- Bahrain, Angola, Ecuador and Venezuela rank as the emerging markets (EM) are the most vulnerable to a downgrade in their sovereign credit ratings if oil prices do not recover in 2015. The other measure of vulnerability is the extent to which a country relies on oil for its fiscal revenues, with Saudi Arabia, Bahrain, Abu Dhabi, Kuwait, Congo and Angola leading the way (see blue bars in the chart below). The red bars show the proportion of the current account inflows that derive from oil. A low ratio denotes a greater potential for a country – such as Mexico – to rely on non-oil exports when the oil price slumps. 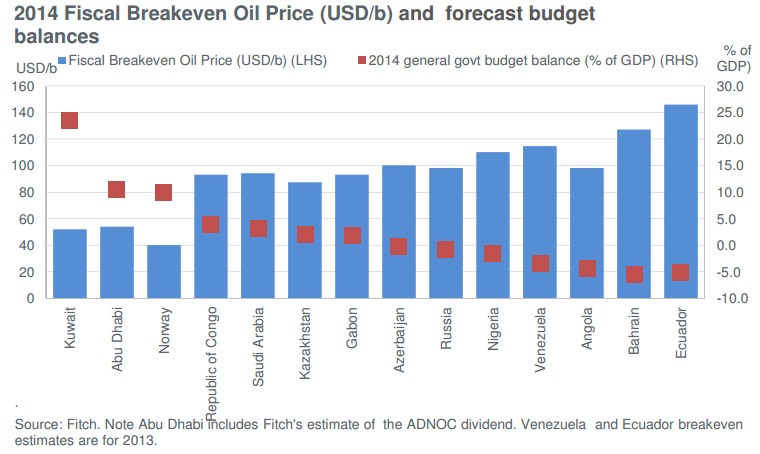 India not placed better:
In my previous article I covered the aspect that India will not be benefited much as the country is heavily dependent on export. Now with slow down of exporting countries followed with Japan, China and weak growth of Euro-zone leads negligible condition for these countries to find consumption growth. Hence Indian exports are going to take a hit and also the fiscal balance. World GDP is already witnessing slowdown and it will witness more slowdown in the coming days unless crude prices rise. Note that we are living in globalized trade world where all business and capital are mixed.