Companies Act, 2013 (Act) has introduced many NEW CONCEPTS AND KEY MANAGERIAL PERSONNEL is one of them. While the Companies Act, 1956 recognised only Managing Director, Whole Time Director and Manager as the Managerial Personnel, the Companies Act, 2013 has brought in the concept of Key Managerial Personnel which not only covers the traditional roles of managing director and whole time director but also includes some functional figure heads like Chief Financial Officer and Chief Executive Officer etc. These inclusions are in line with the global trends.

“Company Secretary” has also been brought within the ambit of Key Managerial Personnel giving them the long deserved recognition of a Key Managerial Personnel of the Company. Another noteworthy feature of this concept is that it combines the important management roles as a team or a cluster rather than as independent individuals performing their duties in isolation to others.

General Meaning: The term key management personnel includes those people having authority and responsibility for planning, directing, and controlling the activities of an entity, either directly or indirectly. 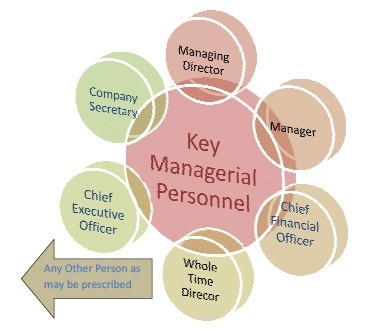 Let’s Discuss the Definitions the definitions of all Six terms used in definition of Key Managerial Personnel:

COMPANY SECRETARY: As per Section 2 sub section 24 of Companies Act, 2013

A director who, by virtue of the articles of a company or an agreement with the company or a resolution passed in its general meeting, or by its Board of Directors, is entrusted with substantial powers of management of the affairs of the company and includes a director occupying the position of managing director, by whatever name called.

An individual who, subject to the superintendence, control and direction of the Board of Directors, has the management of the whole, or substantially the whole, of the affairs of a company, and includes a director or any other person occupying the position of a manager, by whatever name called, whether under a contract of service or not.

WHOLE-TIME DIRECTOR: - As per Section 2 sub section 54 of Companies Act, 2013
A director in the whole-time employment of the company.

A person appointed as the Chief Executive Officer of a Company.

Further, as per recently notified Rule 8A of the Companies (Appointment and Remuneration of Managerial Personnel) Rules, 2014, a company other than a company which is required to appoint a whole time key managerial personnel as discussed above and which is having paid up share capital of Rs. 5 Crores or more shall have a whole time Company Secretary.