In section 2, after clause (7A), the following clause shall be inserted, namely:

After section 154B of the Customs Act, the following section shall be inserted, namely:

'154C. The Board may notify a common portal, to be called the Common Customs Electronic Portal, for facilitating registration, filing of bills of entry, shipping bills, other documents and forms prescribed under this Act or under any other law for the time being in force or the rules or regulations made thereunder, payment of duty and for such other purposes, as the Board may, by notification, specify.'

The statutory framework is being provided vide Section 153C for a common online portal, which shall be a common place for all customs related facilities viz. registration, filing of bill of entries, shipping bills and other documents, payment of duties etc. The customs portal is likely to be integrated with GSTN also. 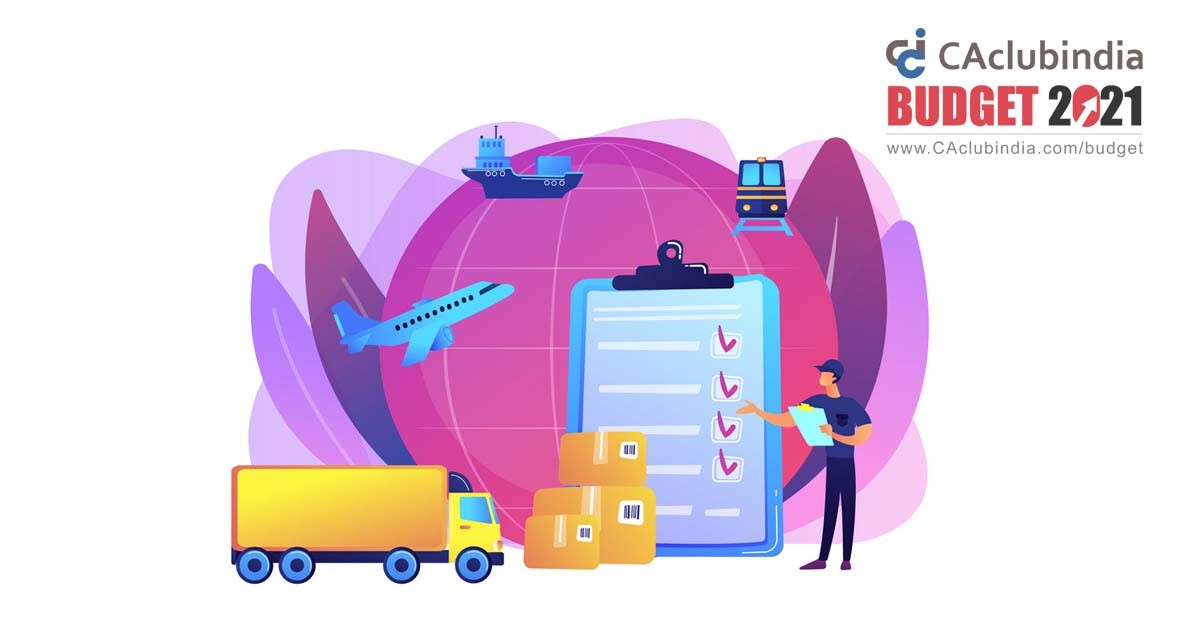 2. Pre-trial disposal of seized gold, the Application shall lie before Jurisdictional Commissioner (Appeals) instead of Magistrate.

In section 5 of the Customs Act, in sub-section (3), for the words and figures 'Chapter XV and section 108', the words, figures, brackets and letter 'Chapter XV, section 108 and subsection (1D) of section 110' shall be substituted.

In section 110 of the Customs Act, after sub-section (1C), the following sub-section shall be inserted, namely:

jurisdiction, who shall, as soon as may be, allow the application and thereafter, the proper officer shall dispose of such goods in such manner as the Central Government may determine.'

3. Providing sunset period of conditional exemptions under the Customs Act

In section 25 of the Customs Act, after sub-section (4), the following sub-section shall be inserted, namely: '(4A) Where any exemption is granted subject to any condition under sub-section (1), such exemption shall, unless otherwise specified or varied or rescinded, be valid up to 31st day of March falling immediately after two years from the date of such grant or variation:

Provided that in respect of any such exemption in force as on the date on which the Finance Bill, 2021 receives the assent of the President, the said period of two years shall be reckoned from the 1st day February 2021.'

Further, going forward all the conditional exemptions under the customs shall have sunset period of 2 years from the end of FY in which the exemptions are issued, unless explicitly stated otherwise. For exemptions in force as on the date of Finance Bill 2021, the sunset period shall expire on 31st March 2023.

Several end-use based exemptions, especially the ones utilized under the mega projects package, import for the purpose of manufacturing are likely to be impacted. The life- time exemptions are put to a permanent stop and the trade would require frequent consultations with the MoF in order to ensure time limit of exemptions be fine-tuned timely extended in deserving cases.

4. Prescribing time limit for completion of proceedings of show cause notice

After section 28BA of the Customs Act, the following section shall be inserted, namely: '28BB. (1) Any inquiry or investigation under this Act, culminating in the issuance of a notice under sub-section (1) or sub-section (4) of section 28 shall be completed by issuing such notice, within a period of two years from the date of initiation of audit, search, seizure, or summons, as the case may be:

(2) For computing the period under sub-section (1), the period during which stay was granted by an order of a court or tribunal, or the period for seeking information from an overseas authority through a legal process, shall be excluded.

Explanation: For the removal of doubts, it is hereby declared that nothing contained in this section shall apply to any such proceeding initiated before the date on which the Finance Bill, 2021 receives the assent of the President.'

A new Section 28BB is inserted to act as rigour upon the investigation authorities to conclude the proceedings with a definite a time-period. Going forward, the show cause notices issued in pursuance of audit, search, seizure, or summons shall have to be issued

within 2 years from the initiation of such proceedings. This time-period is extendable to 1 year on approval by Principal Commissioner or Commissioner of Customs after sufficient cause being shown and upon reasons to be recorded in writing. However, finally the show cause notices shall be issued within time limit prescribed under Section 28 of the Customs Act, 1962.

The period of stay obtained from Court or Tribunal or the period during which information is sought from overseas authority shall be excluded from the above period.

5. Advancing the time frame for filing Bill of Entry

'Provided that the Board may, in such cases as it may deem fit, prescribe different time limits for presentation of the bill of entry, which shall not be later than the end of the day of such arrival: Provided further that';

The indication is to improve the clearance timings for import of goods considering the international benchmark.

6. Confiscation power where goods entered for exportation under wrongful claim of remission or refund.

In section 113 of the Customs Act, after clause (j), the following clause shall be inserted, namely:

'(ja) any goods entered for exportation under claim of remission or refund of any duty or tax or levy to make a wrongful claim in contravention of the provisions of this Act or any other law for the time being in force;'

The goods which are entered for exportation under the wrongful claim of 'remission or refund of any duty or tax or levy to any other wrongful claim under any Customs Act or any other law, shall now be liable to confiscation.

The ramifications are therefore that any goods which are entered for export [under a wrongful claim of] drawback, RODTEP, Advance authorization, EPCG authorization, Rule 96 (10) be liable for confiscation.

It would be noteworthy as to how the claims based on interpretations would be dealt with. As on date, the SEZ unit's claims to RODTEP are not being specifically allowed, therefore the declaration by SEZ unit is as to claiming of RODTEP could land them in ready-made soup, even when the issue might be interpretational one.

After section 114AB of the Customs Act, the following section shall be inserted, namely: '114AC. Where any person has obtained any invoice by fraud, collusion, willful misstatement or suppression of facts to utilise input tax credit on the basis of such invoice for discharging any duty or tax on goods that are entered for exportation under claim of refund of such duty or tax, such person shall be liable for penalty not exceeding five times the refund claimed.

Explanation. - For the purposes of this section, the expression 'input tax credit' shall have the same meaning as assigned to it in clause (63) of section 2 of the Central Goods and Services Tax Act, 2017.'

Under the new section 114AC, penalty for irregular ITC on an invoice (used for claiming refund) would now be punishable under the Customs Act also. The penalty shall be 5 times of the amount of refund so claimed by virtue of the invoice.

However, the imposition of penalty for GST refunds in cases of export by the Customs Act, 1962 may involve legal challenges before Courts. IGST on imports are governed by the Customs Law not the IGST on Export cases.

8. Broadening the scope of Amendment of documents

In section 149 of the Customs Act, after the proviso, the following provisos shall be inserted, namely:

'Provided further that such authorisation or amendment may also be done electronically through the customs automated system on the basis of risk evaluation through appropriate selection criteria: Provided also that such amendments, as may be specified by the Board, may be done by the importer or exporter on the common portal.'

With this insertion of proviso, amendments are allowed to be done through the customs automated system on the basis of risk evaluation through appropriate selection criteria and also certain amendments, as may be specified by the Board, may be done by the importer or exporter on the common portal.

While it is not entirely clear, but this amendment might be sou moto done by the Customs risk evaluation criterion i.e., an exporter's claim may be changed to 'non refund claim', RODTEP declaration may be rejected, there might be increase of the valuation of goods (load) etc.

9. Additional mode for service of notice through portal

In section 153 of the Customs Act, in sub-section (1), after clause (c), the following clause shall be inserted, namely:

'(ca) by making it available on the common portal;'

This amendment enables to serve order, summons, notice, etc. by making it available on the common portal as in like the GST law. So, the importers and exporters are required to monitor their portal regularly otherwise they may miss the attention of service of notices or orders which may be appealable within time bound manners.

A new levy, namely AIDC is introduced as duties of customs vide Section 115 (1) of the Finance Bill, 2021, for the purpose of financing agriculture infrastructure and other development expenditure. The AIDC shall be levied at the same rate as the rate of BCD provided in the First Schedule to the Customs Tariff Act, 1975.

With introduction of new duty, the tax structure on import of certain goods has been changed. For certain products, the effective customs duty rate has been maintained by imposing AIDC and reducing BCD, whereas for certain other products, the effective duty is increased overall by introduction of the new Cess. Overall, the AIDC is applicable on few of the products, mainly agricultural products.

Customs (Import of Goods at Concessional Rate of Duty) Rules, 2017 [IGCR Rules] have been amended to provide the following facilities:

12. Notification of Common Portal for Customs

13. OTHER PROPOSALS INVOLVING CHANGES IN BASIC CUSTOMS DUTY RATES IN RESPECTIVE NOTIFICATIONS [with effect from 2.2.2021, unless specified otherwise]

Prescribing the condition of observance of the Customs (Import of Goods at Concessional Rate of Duty) Rules, 2017 (IGCR Rules, 2017) for certain conditional entries in notification No. 50/2017-Customs dated 30.06.2017, in lieu of certain exiting conditions. Besides certain other conditions for imports are being rationalized/simplified.

Customs duty exemptions, including those which have been granted through certain other stand-alone notifications, have also been reviewed by rescinding the notification:

An Agriculture Infrastructure and Development Cess (AIDC) has been proposed on import of specified goods. To ensure that imposition of cess does not lead to additional burden in most of these items on the consumer, the BCD rates has been lowered. This cess shall be used to finance the improvement of agriculture infrastructure and other development expenditure. The list of items on which cess has been imposed and the applicable duty and AIDC on them would be as follows:

17. OTHER CHANGES (INCLUDING CERTAIN CLARIFICATIONS/ TECHNICAL CHANGES BY AMENDING NOTIFICATION NO. 50/2017- CUSTOMS DATED 30.06.2017

18. Review of levy of Social Welfare Surcharge on various items.