ITR filing exemption to senior citizen above age of 75 - A fiasco?


Arjun (Fictional Character): Krishna, Union Budget 2021-22 highlights that senior citizen above the age of 75 now need not file their Income Tax Return. Is that true?

Krishna (Fictional Character): Arjuna, in the Union Budget 2021-22, senior citizen above 75 age are exempted from filing return of income subject to certain conditions. The banks on the other side are required to deduct the requisite tax from the bank account of such senior citizen. It must be noted such assesses are not exempted from paying tax, they are only exempted from ITR filing. 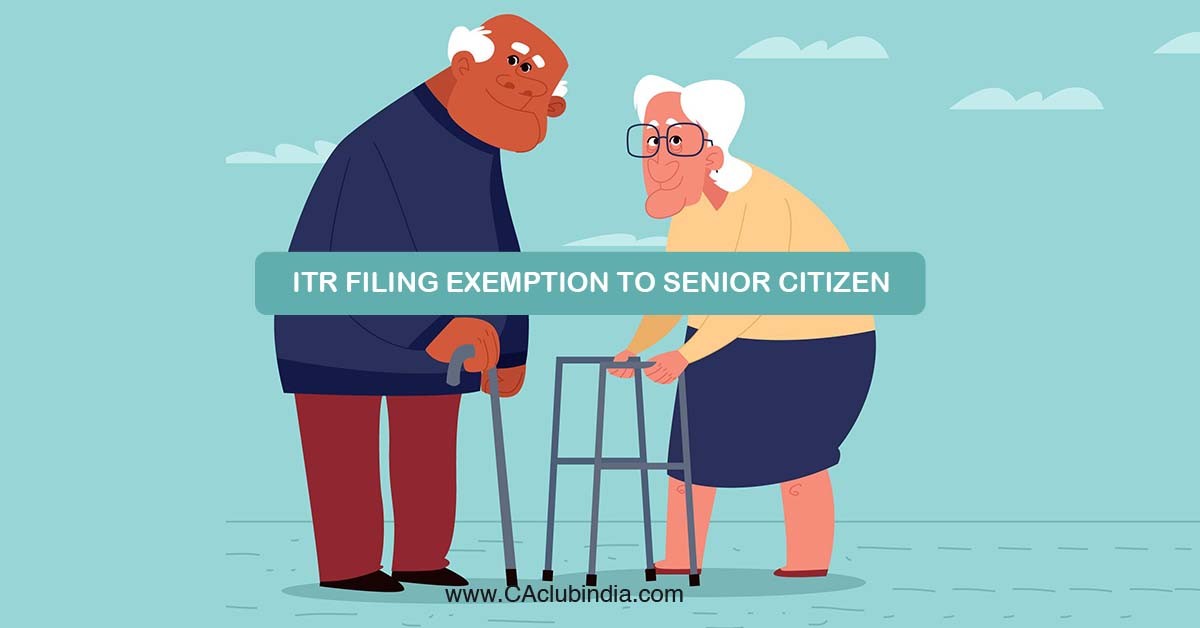 Arjun (Fictional Character): Krishna, what are the conditions to be complied with, for exemption from ITR filing?

Krishna (Fictional Character): Arjuna, the benefit of exemption will only be available to citizen complying with the following conditions:

1. The senior citizen is resident in India and of the age of 75 or more during the previous year;

3. This bank is a specified bank. The Government will be notifying a few banks, which are banking company, to be the specified bank; and

4. He shall be required to furnish a declaration to the specified bank. The declaration shall be containing such particulars, in such form and verified in such manner, as may be prescribed.

These amendments will be applicable from 1st April 2021.

Arjun (Fictional Character): Krishna, what are the practical difficulties that may be faced while claiming such exemption?

Krishna (Fictional Character): Arjuna, there are many practical difficulties that a senior citizen may face while claiming an exemption for ITR filing. Senior citizen generally have FD/RD/saving bank interests as their major incomes. The interest rate for banks differ at times, so it is practically rare for them to have such interest income from a single bank, or from the same bank from which they receive pension income. They may choose to opt for investing in banks which provide high-interest rate, or which provide high rates of interest to senior citizen.

Conditions say that for claiming exemption, the government will specify banks. It means only those who have pension accounts, plus having interest income from such specified banks will get the benefit of the same.

Arjun (Fictional Character): Krishna, what should taxpayers learn from this?

Krishna (Fictional Character): Arjuna, having a look at the scenario, it will not as such help the senior citizens, considering the practical difficulties. They generally have multiple bank accounts, and even if they fulfil the condition of having income accounts in the same bank, what if the bank is not specified? Also, even after filing the declaration, if the bank deducts tax at a higher rate by mistake or by whatsoever reasons, in that case too the senior citizen will have to file a return of income to claim a refund. In this way, it has very limited benefits.