Hello everyone! As promised I m back with one more article that will highlight some different aspects of International Business.

We know a general export procedure is a hierarchical process of Procuring the Export Order and its confirmation, Manufacturing of goods to be exported, Preparing for Shipment, Inspection, Transportation of goods to the port of shipment, Fulfilling port formalities and obtaining customs clearance, Dispatch of documents by forwarding agent to the exporter, Presentation of document to the bank, Receiving payment and claiming export incentives.

Among all the above stated steps, we will today discuss some areas of Shipment Preparation. At this point, the exporter takes some important decisions related to

You would have surely come across two terms: Shipping Services and Chartering.

Firstly we need to know the difference between the two.

Broadly speaking, Chartering is term used to hire a ship whereas Shipping services means services you used to avail along with the Charter.

Who is a Liner?

a. A shipping company who transports goods in containers by sea, with a fixed route and schedule (timetable) , and with a high level of cargo safety is called a Liner.

b. This is similar to an air line or bus line(service), on a route with fixed stoppings as per predetermined timetable. These services will continue to run irrespective of whether the airoplane/bus is full or empty as they have to strictly keep their timings and route. Similarly cargo liners too have to stick to the fixed schedule and route irrespective of whether the vessel is full or not.

c. Moreover a Liner Ship has the following features:

i. It is designed to carry a variety of cargo, with spaces for bales, bundles, boxes, barrels, drums etc. as well as for reefer (refrigerated) cargo. The designs of the holds and number of decks will be different from those of a tramp. With the increased share of containerized cargo, now a days ships are specially designed for carrying different categories of containers operate.

ii. The cargo handling equipment on a liner will be varied and sophisticated for quick loading and unloading of cargo to ensure quick turn-round.

Note: A quick turn-around means that the ship spends the least possible time in the port and most of its time in transit.

1. It operates regularly between fixed ports and normally loads in several ports. It serves a number of discharging ports along a predetermined route.

2. In order to ensure speedier carriage, it is fitted with sophisticated and expensive propelling machinery.

4. It generally offers carriage on fixed and stable freight rates.

What is Tramp service?

The dry bulk and liquid cargoes are generally referred as 'Tramp Trades' and the vessels used to transport these cargoes are called 'Tramp Ships' . Tramp services will not have a fixed route . The ships goes from one port to other depending up on the cargo availability. Tramp services could be compared to a taxi service which is hired to go from one place to another for a single travel. After completing that trip, next employment must be seeked.

Moreover a tramp carrier has the following characteristics:

1. It is primarily designed to carry the more simple and homogeneous cargo in large quantity. It is therefore designed to fully utilize its carrying capacity for carriage of one type of cargo. For example, a grain-carrying ship will be designed in such a way that a full cargo of grains in bulk can be accommodated in the lower holds, feeders and bins.

2. Since one kind of homogeneous cargo is to be handled, a tramp will have comparatively simple equipment. Bulk cargoes are normally loaded and discharged by mechanical equipment, elevators , pumps etc.

3. Because of the comparatively low unit value of commodities carried, a tramp will be operated at the lowest possible cost. This objective can be achieved by operating ships having relatively less speed by fitting less expensive propelling machinery.

4. A tramp generally carries cargoes of one or two ship users. Hence, loading and discharging are confined to a few ports.

5. It does not have a fixed route and predetermined schedule of departure as it is to be engaged by one/two users as and when their need arises.

6. It offers services at terns and conditions, including freight/hire charges, which are not fixed and given but are negotiable. 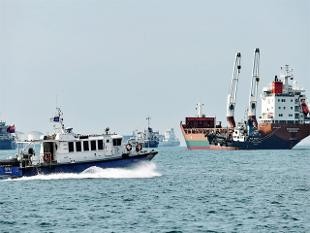 Chartering is a term used in shipping for hiring a ship. Depending on the type of ship and the type of charter, normally a standard contract form called a charter party is used to record the exact rate, duration and terms agreed between the ship owner and the charterer. There are various types of chartering, they are

1. A voyage charter is the hiring of a vessel and crew for a voyage between a load port and a discharge port.

b. Freight may be payable either according to the actual quantity loaded or may be calculated on the basis of total capacity of the ship.

c. In voyage charter, the ship-owners are not only to meet all the expenses of running the ship such as officers and crew wages, stores and provisions, insurance of ship, depreciation etc but also the operating expenses like fuel cost, port charges, light dues, etc.

d. The ship-owners recoup their expenses and earn profits from the freight paid by the charterers.

2. A time charter is the hiring of a vessel for a specific period of time for operation within the defined territories or between agreed ports.

a. The entire capacity of the ship is hired and the ship owners receive charter hire for the time duration for which it has been hired.

b. Under time charter, the ship owners undertake that the ship is in seaworthy condition at the commencement of the period of hire and that they will exercise due diligence or reasonable care to maintain it in seaworthy condition. This implies that the ship owners are responsible for keeping the ship in a thoroughly efficient stage as regards hull, machinery and equipment during the period of the charter agreement.

3. A bareboat charter is an arrangement for the hiring of a vessel whereby no administration or technical maintenance is included as part of the agreement.

Under this arrangement, the ship owners let out the bare ship for a period of time.

The difference between the time charter and bareboat charter lies in the fact that in the latter case the ship in the bare form lies at the disposal of the charterers who have the full right and responsibility of operating the ship.

4. A demise charter shifts the control and possession of the vessel; the charterer takes full control of the vessel along with the legal and financial responsibility for it.

The ship owners have the minimum responsibility and act as if they are ‘dead’ and have no concern about the ways the ship will be used.

Since the ship is at the disposal of charterers, they have the right to appoint the Master and the Chief Engineer, however, subject to the approval of the owners. They bear all the costs and expenses for the operation of the ship.

For the time period, the ship owners are paid a fixed sum calculated at a certain rate per ton dead weight on summer free board per calendar month payable in advance.

The ship is put at the disposal of the charterers in the seaworthy condition and after the expiry of the time period; it is redelivered to the ship owners in the same good order condition as and when delivered, minus the ordinary wear and tear.

Today we discussed about one major area of Shipment Preparation. Insurance, Policies, Perils and Filing the Insurance Claims is yet to be discussed.

I hope this article added up to your knowledge. Do share your views over it. Critics are always the best people who lead one to perfection!