How to calculate significant ownership to file BEN form 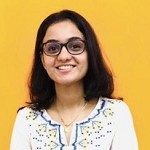 
Calendar of the Events :

Who is the Significant Beneficial Owner?

When an individual shall be considered to hold a right or entitlement indirectly in the reporting company : 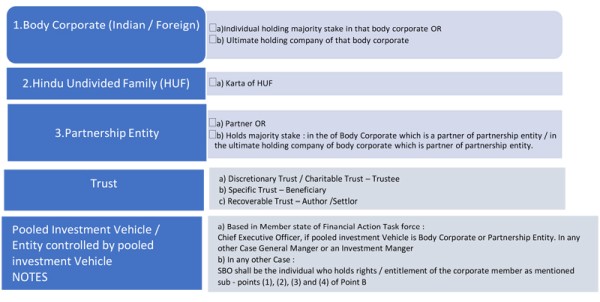 2. Together i.e. Person Acting in Concert :

Rules not applicable to the extent the shares of the reporting company is held by :

STEPS TO BE COMPLIED BY THE REPORTING COMPANY

STEP-1 : The Company should check whether any member is Non-Individual and holding more than 10% of shares, voting rights, right to receive or participate in the dividend or any other distribution payable in a financial year in the company.

STEP -2 : Sending notices to the Non-Individual members in Form No. BEN-4 seeking information to furnish the Significant Beneficial Owner of the shares.

STEP-3 : Receiving the duly filled FORM No. BEN-4 from the Non-Individual members who is holding more than 10% of the shares in the company . [Timeline - Within 30 days of date of notice in Form No. BEN-4]

STEP-5 : Filing of E-form No. BEN-2 with ROC by the Company. [Timeline - Within 30 days from the date of receipt of declaration in Form No. BEN-1 from the SBO]

As per the Explanation I of Rule 2 (1) (h), unless there is any indirect holdings, there is no need to declare SBO. Further, as per Explanation II, point - 1, the shares held by I1 in his own name in the R is to be considered as Direct holding.
[SBO declaration not required].

I1 has already made declaration under sub section 2 of section 89.

As per the Explanation I of Rule 2 (1) (h), unless there is any indirect holdings, there is no need to declare SBO. Further, as per Explanation II, point - 2, if the I1 declares his holding or beneficial interest in the R under section 89 (2) then such holding or interest shall be considered as Direct holding.

As per the Explanation I of Rule 2 (1) (h), unless there is any indirect holdings, there is no need to declare SBO. I1 and I2 are the Person Acting together, and their holding is more than 10%. However, in the interpretation of Explanation I, no need disclosure required.

As per the Explanation I of Rule 2 (1) (h), unless there is any indirect holdings, there is no need to declare SBO. The Indirect holding of I1 is greater than 10% in R. (i.e. the entire 15% holding of H1 in R shall be considered as significant influence of I1 in the R).

As per the Explanation I of Rule 2 (1) (h), unless there is any indirect holdings, there is no need to declare SBO. Further, as per Explanation II, point - 2, if the I1 declares his holding or beneficial interest in the R under section 89 (2) then such holding or interest shall be considered as Direct holding.

(Note: I1 is the minor member and I2 is the karta of HUF)

I1 and I2 being the members of same HUF, deemed to be considered as person acting together.

Further, I1 is holding the majority stake in the ultimate holding Company (i.e. H3), hence the entire holding of H1 in the R shall be attributed to I1.

1 is having the majority stake H1. The entire holding of H1 will be considered of I1. And that holding is more than 10%.
[SBO declaration is required].

1. Purpose of filing the form : When to select the radio button 'for declaration of holding reporting company' ?

Ans: When the Subsidiary or the Wholly Owned Subsidiary company files the SBO.
The SBO for subsidiary or wholly owned subsidiary will be the same SBO which was declared by the ultimate holding / holding company.

2. What is the Number of Significant Beneficial Owners for whom the form is being filed ?

Ans : The individuals or person acting together, taking into consideration the indirect control along with the direct control in the reporting company, are to be considered as SBO.
Example : In case 2, (point d), there are 2 SBO. One is Minor holding directly, and second is Karta holding indirectly with the Minor.

3. Which is the date to be mentioned in the ' date of acquiring Significant Beneficial Interest' ?

4. Which is the date to be mentioned in the 'date of declaration under sub-section (1) of section 90.

Ans: The date when the individual declared as SBO in BEN-1 form.

5. When there are more than 2 SBO, do we need to take out ratio of each individual as per his holding in the member or reporting company?

Ans: No need to take out ratio. The entire stake of the member in the reporting company shall be considered as percentage which each SBO is holding.
Further, the additional attachment shall be give in BEN-2 clarifying that the entire holding of member in reporting company is attributed to all the SBO collectively and not divided among them.

Ans: Either the Company can file the additional attachment in BEN-2 stating the additional SBO which a reporting company have or else can file another BEN-2 for the remaining SBOs'.

10. If there has been change in the holding of SBO, do we require to file to two BEN-2?

Further, if there was any change in the holding of SBO, then the new BEN-2 shall be filed for the SBO against the ID generated by initial BEN-2 form.

Ans: Subsidiary or Wholly owned subsidiary shall file the same SBO which is filed by the holding / ultimate holding company. In such case it would be because the holding reporting company had not identified any SBO; but simultaneously if the subsidiary company or Wholly owned subsidiary company identifies the SBO, then such company shall file the BEN-2, by selecting radio button second 'For declaration of Significant Beneficial Ownership under Section 90' of the Form.

12. If there are two individual (husband and wife) holding equal percentage of the stake (i.e. 50% is hold by each individual) in the member of reporting company, then do we need to consider such individuals as SBO?

Ans: In the Spirit of Law: Yes. They are person acting together and collectively their holding is 100%. Hence they are holding the majority stake as per the Explanation III (I) of Rule 2 (1) (h).

13. Is it mandatory to consider the relatives as 'person acting together ' to calculate the majority stake or significant influence.

Ans: The law talks about the actual control exercised by the individual acting alone or together indirectly.

The concept of deemed person acting together is provided under the SEBI (SAST) regulations. Here, the Law talks about actual control, hence mere on prima facie of blood relations, individuals can't be stated as person acting together. There may be the instances where though the individuals are connected through blood relationship, but their decisions and controls are not influenced by each other. And no one can challenge the same.But however, one has to always the interpret the provisions in the spirit of Law.

Ans: No. As per the rule 8 of SBO rules, the subsidiary or wholly owned subsidiary companies need to file BEN-2 by selecting the first radio button i.e. 'For declaration of holding reporting company'.