How OPC is different from Sole Proprietorship?


ONE PERSON COMPANY UNDER COMPANIES ACT, 2013

Definition of One Person Company ('OPC')

How OPC is different from a 'Sole Proprietorship' 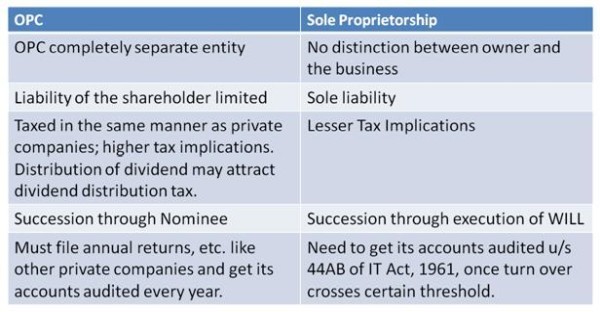 Section 3(1)(c) of the Act provides that the words 'One Person Company' must be mentioned below the name of the company in bracket wherever it appears.

Who can incorporate an OPC?

Any naturally born Indian who is also a resident of India (i.e. have stayed in India for at least 182 days during the immediately preceding FY).However, one of such person cannot form more than one OPC.

Restriction on Incorporation of an OPC

OPC cannot be incorporated or converted into Section 8 Company (i.e. company with charitable objects, etc.) or carry out non-banking financial activities, including investment in securities of any body corporate.

How many types of OPCs can be incorporated under the Act?

There can be five types of OPCs that can be incorporated under the new Act, viz. 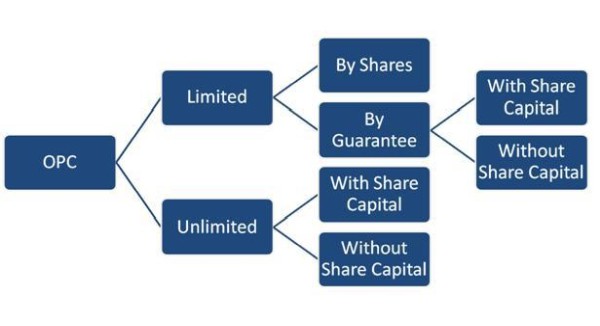 Just like a private company limited by shares, an OPC must have a minimum paid-up capital of Rs. 1 Lakh and cannot make invitation to public to subscribe for its securities. The restriction on right to transfer shares as applicable to a private company shall also apply to an OPC.

Members and Directors in an OPC

The minimum and maximum number of members in an OPC can be only one. As per Section 152(1) of the Act, an individual being member of OPC is deemed as First Director of the OPC until the director(s) are duly appointed by the member. The minimum and maximum number of directors in an OPC can be one (1)[4] and fifteen (15) respectively. In order to increase the number of directors beyond 15 directors, a special resolution must be passed by the OPC to that effect.

Nominee in an OPC

An OPC must mention one person as 'Nominee' in the event of death, incapacity, etc. who will- (a) become a member of OPC[5]; (b) be entitled to all shares of the OPC, and (c) bear all liabilities of OPC. However, written consent of such Nominee to act as nominee must be obtained and filed with the RoC at the time of incorporation along with MoA and AoA.[6]

A Nominee may, withdraw his consent by giving a notice in writing to the sole member and to the OPC. The sole member then nominates another person as nominee within 15 days of the receipt of the notice of withdrawal. Further, the OPC is required to file with RoC: (a) notice of such withdrawal of consent; (b) name of the new person nominated by it (in Form No INC-4 along with the fee as provided in the Companies (Registration offices and fees) Rules, 2014), and (c) written consent of the new person so nominated (in Form No. INC.3).The above filing requirement has to be fulfilled within 30 days of receipt of the notice of withdrawal of consent from the earlier nominee. Also, a Nominee can be changed at any time by providing a notice to the RoC.

Ordinary and Special Resolutions by an OPC

Section 114 of the new Act is talks about ordinary and special resolutions. As per S. 122(3), it will be sufficient for an OPC, if the resolution is communicated by the member to the Company in the minutes book (as required under section 118) and signed and dated by the member. Such date will be then considered as date of meeting. Where there is only one director on the Board of an OPC, a resolution by such director has to be entered into the minutes book and signed and dated by such director.[7]

Board Meetings and AGM

OPC (also Small Cos. and Dormant Cos.) is deemed to have complied with S. 173, if at least one meeting of the BoD is has been conducted in each half of a calendar year and the gap between two meeting is not less than 90 days.[8] Section 173 and 174 (Quorum of Meeting of BoD) will not apply to an OPC in which there is only one director on its Board. Further, an OPC is not required to hold an AGM.[9]

Financial Statements of an OPC

Financial Statement of an OPC has to be approved by the Board and needs to be signed by only one director for submission to the auditor. It is to be noted that an OPC need not prepare Cash Flow Statement as part of its financial statement.[10] The copy of such financial statement along with other documents etc. must be filed with the RoC within 180 days from the closure of the financial year.[11] Report of the Board to be attached to the financial statement shall mean, in case of an OPC, a report containing explanations or comments by the Board on every qualifications, reservations or adverse remarks or disclaimer made by the auditor in his report.

Annual Returns of an OPC must be signed by a company secretary and the director. In case there is no company secretary, the signature is required only from the Director.[12] Mandatory rotation of auditor after expiry of maximum term is not applicable to an OPC.

Contract between OPC and Member

Where an OPC enters into a contract with its sole member (who is also the director), unless the contract is in writing, the OPC should shall ensure that the terms of the contract/ offer are incorporated in the memorandum of the OPC or recorded in the first meeting of the Board held next after entering into such contract.[13] The above provision is, however, not applicable if the contracts are entered into by the company in the ordinary course of business. The other requirement is that the OPC must intimate the RoC about every such contract recorded in the minute book of its Board under section 193(1) within 15 days of the date of approval by the Board.

Penalty of non-compliance with the provision of the Act

List of Exemptions Available to OPCs under the Act

Following sections are not applicable to OPCs-

ONE PERSON COMPANY IN UK

The concept of OPC, though, a new one in India, has been in existence in the European countries for several years now. In UK, the famous case of Salomon vs. A Salomon & Co. Ltd.[15] paved the way to the idea of a one man company by setting up a precedent. In this case, Lord Herschel famously remarked:

It is said that the respondent company is a 'one man' company, and that in this respect it differs from such companies as those to which I have alluded. But it has often happened that a business transferred to a joint stock company has been the property of three or four persons only, and that the other subscribers of the memorandum have been clerks or other persons who possessed little or no interest in the concern. I am unable to see how it can be lawful for three or four or six persons to form a company for the purpose of employing their capital in trading with the benefit of limited liability, and not for one person to do so, provided in each case, the requirements of the statute have been complied with and the company has been validly constituted. How does it concern the creditor whether the capital of the company is owned by seven persons in equal shares, with the right to equal share of the profits, or whether it is almost entirely owned by one person, who practically takes the whole of the profits.

The author can also be reached at indiancaselaws@gmail.com