An Overview of The Companies Bill, 2011

4.0 Companies law in Some Countries

5.0 Origin of Companies Act in India

9.0 Important Provisions of the Companies Bill, 2011 in Brief

11.0 Professional Opportunities for Chartered Accountants under The Companies Bill, 2011

The word 'Company' is an amalgamation of the Latin word 'Com' meaning "with or together" and 'Pains' meaning "bread". Originally, it referred to a group of persons who took their meals together. A company is nothing but a group of persons who have come together or who have contributed money for some common purpose and who have incorporated themselves into a distinct legal entity in the form of a company for that purpose.

Generally, a company is a form of business organization. The precise definition varies from country to country.

Companies, whether public or private, are an indispensable part of an economy. They are the modes through which a country grows and expands world wide. Their performance is an important parameter of a countries economic position.

The basic theory behind all business organizations is that, by combining certain functions within a single entity, a business can operate more efficiently, and thereby realize a greater profit. Governments seek to facilitate investment in profitable operations by creating rules that protect investors in a business from being held personally liable for debts incurred by that business, either through mismanagement, or because of wrongful acts.

Companies law (or the law of business associations) is the field of law concerning business and other organizations. It is an establishment formed to carry on commercial enterprises. This includes corporations, partnerships and other associations which usually carry on some form of economic or charitable activity. Company law is directly related to enterprise: it can either promote it or hold it. Most enterprise is corporatised and corporate regulation has a huge impact on the economy.


Company law in the commonwealth (UK, Australia, Hong Kong, Singapore, India, Malaysia) has common sources and influences. Common features also exist in European Union and US laws. However, the UK Companies Act 1948 is the great mother of most corporate laws world over, but has undergone several changes over time. 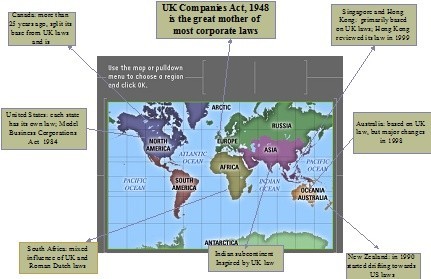 4.0 Companies law in Some Countries

The Company / Corporation (or by whatever other name it may be known in different countries) types of business entity exist and are defined in the legal systems of various countries. There are various types of company that can be formed in different jurisdictions and Countries have their own Company Law to govern them, of which some of them are listed below:

In the United States, the individual states incorporate most businesses, and some special types are incorporated by the federal government. For federal tax purposes, the Internal Revenue Service has separate entity classification rules. Under the rules, an entity classified as a corporation may be either an S corporation or a C corporation. The main business designations for the State incorporated Corporations are - Corp., Inc. (Corporation, Incorporated), which are used to denote corporations (public or otherwise). These are the only terms universally accepted by all 51 corporation chartering agencies in the United States. However in some states other suffixes may be used to identify a corporation, such as Ltd., Co./Company, or the Italian term S.p.A. (in Connecticut). Some states that allow the use of "Company" prohibit the use of "and Company", "and Co.", "& Company" or "& Co.". Also Delaware corporation, Nevada corporation are the others. Since the US is a federal system, Company law can vary substantially from state to state. Delaware General Corporation Law is the statute governing corporate law in the state of Delaware. Delaware is well known as a corporate haven. Over 50% of US publicly-traded corporations and 60% of the Fortune 500 companies are incorporated in the state. The Delaware General Corporation Law consists of XVII sub-chapters.

The Companies Act of United Kingdom consists of 1300 sections under 47 parts and 16 Schedules.

The Corporations Act of Australia consists of 1471 sections under 7 volumes.

5.0 Origin of Companies Act in India

In India, the Companies Act, 1956, is the most important piece of legislation that empowers the Central Government to regulate the formation, financing, functioning and winding up of companies. The Act contains the mechanism regarding organizational, financial, managerial and all the relevant aspects of a company. It provides for the powers and responsibilities of the directors and managers, raising of capital, holding of company meetings, maintenance and audit of company accounts, powers of inspection, etc. The Act applies to whole of India and to all types of companies, whether registered under this Act or an earlier Act. But it does not apply to universities, co-operative societies, unincorporated trading, scientific and other societies.

The Ministry of Corporate Affairs took up a comprehensive revision of the Companies Act, 1956 (the Act) in 2004 keeping in view that not only had the number of companies in India expanded from about 30,000 in 1956 to nearly 7 lakhs, Indian companies were also mobilizing resources at a scale unimaginable even a decade ago, continuously entering into and bringing new activities into the fold of the Indian economy. In doing so, they were emerging internationally as efficient providers of a wide range of goods and services while increasing employment opportunities at home. At the same time, the increasing number of options and avenues for international business, trade and capital flows had imposed a requirement not only for harnessing entrepreneurial and economic resources efficiently but also to be competitive in attracting investment for growth. These developments necessitated modernization of the regulatory structure for the corporate sector in a comprehensive manner.

Earlier, a Bill called Companies (Amendment) Bill, 2003 had been introduced by Ministry of Corporate Affairs (MCA) (then Department of Company Affairs) in the Rajya Sabha on 7.5.2003. Later on, a large number of changes were found to be necessary in the Bill. A decision was, therefore, taken to carry out a comprehensive review of the Companies Act, 1956 and to introduce a new Companies Bill for the consideration of the Parliament.

The review and redrafting of the Companies Act, 1956 was taken up by the Ministry of Corporate Affairs on the basis of a detailed consultative process. A ‘Concept Paper on new Company Law’ was placed on the website of the Ministry on 4th August, 2004. The inputs received were put to a detailed examination in the Ministry. The Government also constituted an Expert Committee on Company Law under the Chairmanship of Dr. J.J. Irani on 2nd December 2004 to advise on new Companies Bill. The Committee submitted its report to the Government on 31st May 2005. After considering the report of the Committee and other inputs received from time-to-time, the Government took up the exercise of comprehensive review of the Companies Act, 1956.

A Companies Bill 2008 was introduced by the Government in the Lok Sabha on October 23, 2008. Due to dissolution of the 14th Lok Sabha, the Companies Bill, 2008 lapsed.