We all have heard about Goods & Service Tax. It is one of the many  legislations that are pending in the list of changes that we might expect in time to come. This tax is a consolidation of many indirect taxes, thereby drastically overhauling the system of Indirect Taxes in India.

Why Goods and service tax?

One of the main reasons of the introduction of GST is to avoid cascading effect of taxes in India. There are certain problems in the system that have not been solved till date. We shall talk about these problems now. The credit of Input VAT is available against the output VAT. In the same manner, the credit of Input excise/service tax is available for set off against the output liability of excise/service tax. However, the credit of VAT is not available against excise and vice versa. We all know that VAT is computed on a value which includes excise duty. In the same manner, CENVAT credit is allowed only for excise duty paid on inputs, and not on the VAT paid on the input raw material .This shows that  there is tax on tax.

An example to show how does it work?

The illustration shown below indicates, in terms of a hypothetical example with a manufacturer, one wholesaler and one retailer, how GST will work. Let us suppose that GST rate is 10%, with the manufacturer making value addition of Rs.30 on his purchases worth Rs.100 of input of goods and services used in the manufacturing process. The manufacturer will then pay net GST of Rs.3 after setting-off Rs.10 as GST paid on his inputs (i.e. Input Tax Credit) from gross GST of Rs.13.

Similarly, when a retailer sells the same goods after a value addition of (say) Rs.10, he pays net GST of only Re.1, after setting-off Rs.15 from his gross GST of Rs.16 paid to wholesaler. Thus, the manufacturer, wholesaler and retailer have to pay only Rs.6 (= Rs.3+Rs. 2+Re. 1) as GST on the value addition along the entire value chain from the producer to the retailer, after setting-off GST paid at the earlier stages. The overall burden of GST on the goods is thus much less. This is shown in the table below. The same illustration will hold in the case of final service provider as well.

See these abbreviations before understand them-

Now look at the chart given below

CGST and SGST rates have been assumed to be 8%.

Case1: Sale in one state, resale in the same state.

In the example illustrated below, goods are moving from Chandni Chowk to Gandhi Nagar. Since it is sale within the state, CGST and SGST would be levied. The collection goes to the Central and the State Govt. as below. Then the goods are resold from Gandhi Nagar to Sadar Bazaar. This is again within the state, so SGST and CGST would be levied. Sale price is increased so tax liability will also increase. In case of resale, the credit of input CGST and SGCT is claimed as shown; and the remaining taxes goes to the respective govt. 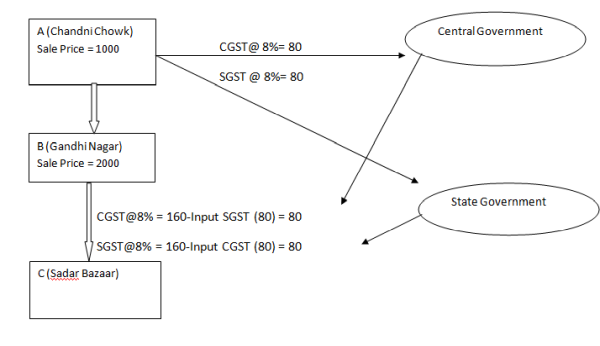 Case2: Sale in one state, resale in another state.

In the example illustrated below, goods are moving from Chandni Chowk to Gandhi Nagar. Since it is sale within the state, CGST and SGST would be levied. The collection goes to the Central and the State Govt. as shown in diagram below. Later the goods are resold from Gandhi Nagar to Jaipur (Outside the state). Therefore IGST would be levied and the whole IGST goes to the central govt. 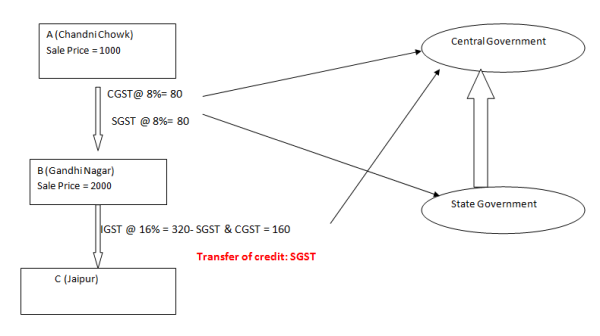 Case3: Sale outside the state, resale in that state.

In this case, goods are moving from Delhi to Mumbai. Since it is an interstate sale, IGST would be levied. The collection goes to the central govt. Later the goods are resold from Mumbai to Pune (within the same state). Therefore CGST and SGST would be levied. 50% of the IGST can be set off against CGST and remaining 50 % of the IGST can be set off against SGST which is taken as credit. It is important to note that though IGST is not collected by the state govt., still its credit is claimed against SGST. Since this amounts to loss to the State government, the central government compensates the state government by transferring the credit to state government. 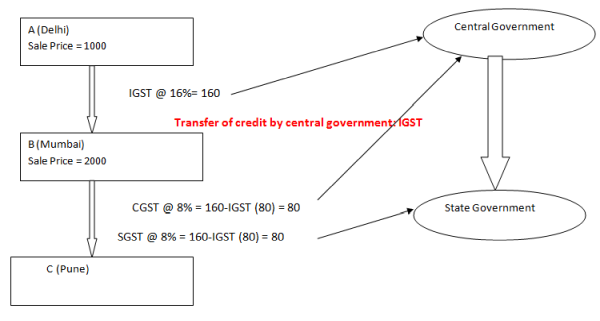 The biggest benefit that will be witnessed with the introduction of the GST is that multiple taxes that currently exist will no longer remain in the picture. This means that taxes like octroi, CENVAT, central sales tax, state sales tax, entry tax, license fees, turnover tax etc will no longer be present and all that will be brought under the GST. Businesses thus will not have to deal with multiple taxes but will be able to undertake the tax compliance in an easy manner.

CONCLUSION -GST is expected to play a key role in bringing about more transparency into the tax system. Instead of fiscal concessions, concessions to select industries on grounds such as environmental protection etc. could be provided in a transparent manner through cash refunds or otherwise. While unified rate may be there, states may be allowed to charge rates most suitable to them such as on alcohol, petroleum products, etc. A very strong infrastructure network would be required to administer GST which would include facility for online payment of tax and e-filing of returns. The GST as a new levy could be a very effective tool and break. through in indirect tax reforms, provided it is made simple and assessee-friendly – not like the present tax system.