GST- Goods & Service Tax is one of the most crucial and major indirect tax reforms after independence to be implemented very soon (Probably from 01.04.2016). GST with its embedded element of simplicity in levy and collection of taxes as opposed to multiple / multi-point levy and collection of indirect tax, would remove the tax distortions besides reducing the cost of goods and services in the hands of the final consumer. With every individual, corporate, and professionals speaking about the positive impact on country’s growth, prosperity and GDP once the GST is implemented, let us understand what is GST, how it will work and how it will impact the Indian economy and how it will effect India globally.

The framework for levy of indirect taxes under the Constitutional provisions in India vide Article 246, Seventh Schedule empowers both the Central Government and the State Governments to levy and collect applicable taxable-event based indirect taxes on transactions of goods and/or services. The taxable event varies from the point of manufacture or sale or provision of services or imports/exports. The existing indirect tax laws are origin-based tax, structured to levy and collect at the point of happening of the prescribed taxable event.

Diagrammatic representations of major components/constituents of Indirect Taxes are as follows: 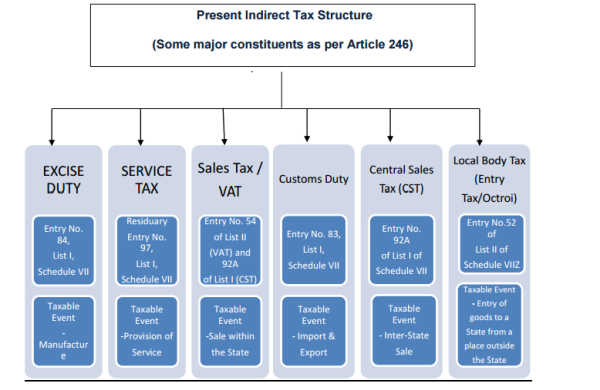 The challenges embedded within the existing structure of Indirect Taxation in India leads to creation of obstacles and have an effect there under in the form of:

The present structure of taxation for goods and/or services in India:

• characterized as a cascading and distorted imposition of tax on production resulting in wrong allocation of resources and decreasing trend of productivity and declining the pace of economic growth.

• issues relating to double taxation - arising out of bifurcation of goods and services and differential treatment especially in the context of taxation of intangibles.

• inhibits voluntary compliance and leads to a narrow Tax/GDP ratio due to a narrow tax base.

How GST will work and how it will replace the present system:

GST is a value added tax, levied at each point in the supply chain with credit allowed for any tax paid on inputs acquired at each point for use in making the supply. It would apply to both goods and services in a comprehensive manner with exemptions restricted to a minimum.

India is opting for Concurrent Dual GST model. The need for a Dual-GST model is based on the following premise:

• At existing framework, both levels of Government i.e. Centre and State, as per Constitution holds concurrent powers to levy tax domestic goods and services;

• The proposed Concurrent Dual-GST model would be a dual levy imposed concurrently by the Centre and the States, but independently;

• Both the Centre and State will operate over a common base, i.e. the base for levy and imposition of duty/tax liability would be identical.

To understand the operating procedure of "Concurrent Dual GST Model"– we have to consider the tax/taxes which shall be levied as per place of supply of goods and services.

Additional Tax (up to 1%) to be levied in case of inter-state supply of goods, which is a non-vatable item. Hence, no input credit available on such

It is expected that the base and other essential design features would be common between CGST and SGST, across SGSTs for the individual States. Both CGST and SGST would be levied on the basis of the destination principle. Thus, exports would be zero-rated, and imports would attract the tax in the same manner as domestic goods and services. Inter-State supplies within India would attract an Integrated GST (aggregate of CGST and the SGST of the destination State). 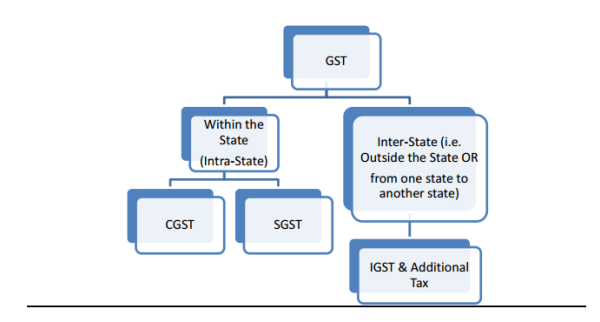 A summary of levy and the imposing and collecting authority

The proposed GST in India would include All Goods & Services except:

i. Incentives to Industries which is to be converted into investment link cash subsidy

ii. Special Industrial Area Schemes which is to be also converted into investment based in the period they are valid

iii. Around 99 items presently exempted under VAT is proposed to continue in GST regime

v. Transactions which are below threshold limits

It is also advised that there should not be exemption except in following cases:

iii. Any service transactions between an employer and employee either as a service provider, recipient or vice versa;

iv. Any unprocessed food article which is covered under the public distribution system should be exempt regardless of the outlet through which it is sold

v. Education services provided by an educational institution to its students, faculty and Staff --- Currently exempt under Mega Notification

Taxes to be subsumed post-GST

This Bill specified that following Central indirect taxes and levies could be subsumed in GST:

7. Central Surcharges and Cesses excluding those applicable to income-tax, customs duties and to excise duties so far as they relate to goods outside the purview of the goods and services tax.

This Bill specified that following State indirect taxes and levies would be subsumed in GST:

1. State VAT/Sales Tax,
2. Entertainment tax (unless it is levied by the local bodies),
3. Luxury Tax,
4. Taxes on lottery,
5. Betting and gambling.
6. Tax on advertisements,
7. State Cesses and Surcharges insofar as they relate to supply of goods and services; and
8. Entry Tax, not levied by local bodies.

5.8.2: Other Indirect Taxes to continue post-GST

The following are the proposals on GST mechanism. 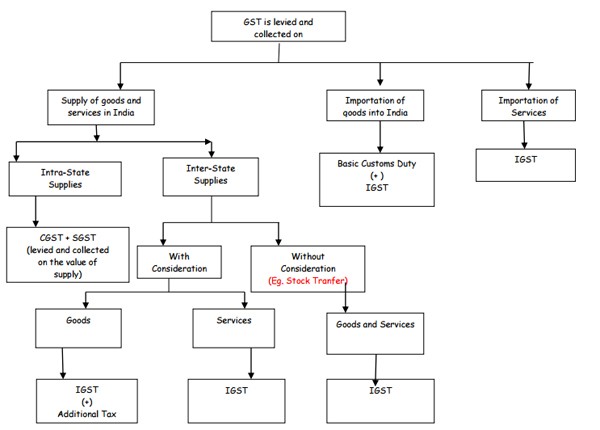 Rate structure for Levy and Chargeability:

• Rates for CGST and SGST should be common across the states and shared between Central & State.

•There is no proper rate spelt till date; however, there are different rates suggested by different bodies.

Exports of Goods and Services to be Zero-rated.

The objectives behind threshold limit are:

• Gross Annual turnover of Rs.10 lacs both for goods and services for all the States and Union Territories may be adopted with adequate compensation for the States (particularly states in North-Eastern Region and Special Category States)

• Threshold limits for CGST for goods Rs.1.5 crores and Rs.10 lacs for services are suggested

[However, Limit for CGST, SGST & IGST may remain same in the GST law]

• Uniform threshold limits for both CGST and SGST for all manufacturers, traders and service providers at Rs.10 lacs

• Existing exemption of Rs.150 lacs of turnover for small scale industries should not be continued under the GST framework.

Small dealers with annual aggregate turnover of goods and services between Rs.10 Lacs

(a) Gold, silver and platinum ornaments;
(b) precious stones; and
(c) bullions

Note - The limit of Rs.40 Lacs is based on the consideration that dealers with turnover of Rs.40 Lacs or more are subject to tax audit under the Income Tax Act, 1961 and therefore they would suffer from many additional burden in terms of documentation under the GST.

"The threshold for compounding for small dealers should also be uniform under CGST and SGST whether it is fixed at Rs. 50 lacs of turnover per annum or Rs.1 crore per annum. Of course, we must not lose sight of one of the critical deliverables of GST viz. that it should result in considerable simplification for small dealers so that compliance is easy and assured.

In short Finance Minister stated that threshold for compounding for small dealers should also be uniform under CGST and SGST whether it is fixed at Rs. 50 lacs of turnover per annum or Rs.1 crore per annum.

Comments of the Department of Revenue on the First Discussion Paper on GST Centre may also have a Composition Scheme up to gross turnover limit of Rs.50 lakh, if threshold for registration is kept as Rs. 10 lakh. The floor rate of 0.5% will be for SGST alone, in case Centre also brings a Composition Scheme for small assesses. The Centre may leave the administration of Compounding Scheme, both for CGST and SGST to the States. Bill was silent with respect to the compounded levy scheme.