Generally, the courts in India, while granting bail to an accused impose a condition that the accused should surrender his passport and will not leave the jurisdiction of the court without prior permission of the court or if the need arises may issue a look out notice to ensure that the accused is available at all times to join the investigation and to face the charges against him.

Now the question arises is, if there is a look out circular issued against an accused or such condition imposed by the court, the accused cannot travel outside India?

For the first time Hon'ble Supreme Court in Satwant Singh Sawhney vs D. Ramarathnam, Assistant on 10 April 1967 has held that Right to travel and to go outside the country is included in the right to personal liberty within the meaning of Article 21 of the Constitution of India and no person can be deprived of that right except according to the procedure established by law.

The ‘right to life' as embodied in Article 21 is not merely confined to animal existence or survival but it includes within its ambit the right to live with human dignity and all those aspects of life which go to make a man's life meaningful, complete and worth living. It also ruled that the expression ‘Personal Liberty' in Article 21 is of the widest amplitude and it covers a variety of rights that go to constitute the personal liberties of a man.

In the case of Kharak Singh vs The State Of U. P. & Others on 18 December 1962 the Supreme Court quoted and held that

The term 'life' as here used something more is meant than mere animal existence. The inhibition against its deprivation extends to all those limbs and faculties by which life is enjoyed. The provision equally prohibits the mutilation of the body by amputation of an armoured leg or the pulling out of an eye, or the destruction of any other organ of the body through which the soul communicates with the outer world.

In Francis Coralie Mullin vs The Administrator, Union ... on 13 January 1981, Hon'ble Supreme Court has observed that

In Parvez Noordin Lokhandwalla vs State Of Maharashtra on 1 October 2020, Hon'ble Supreme Court has allowed the appellant accused of serious offences to travel to the United States for a period of eight weeks saying that

'We find, on the basis of the previous record of the appellant, that there is no reason or justification to deny him the permission which has been sought to travel to the US for eight weeks. The appellant is an Indian citizen and holds an Indian passport. While it is true that an FIR has been lodged against the appellant, that, in our view, should not in itself prevent him from travelling to the US, where he is a resident since 1985, particularly when it has been drawn to the attention of the High Court and this Court that serious consequences would ensue in terms of the invalidation of the Green Card if the appellant were not permitted to travel.”

And finally, Hon'ble Supreme Court recently in Satish Chandra Verma Vs Union of India in 2020 has held that the right to travel abroad is an important basic human right and also extends to private life, the Supreme Court held in its recent order.

While hearing an appeal filed by IPS Officer Satish Chandra Verma, who was denied permission to travel abroad on account of a pending departmental inquiry against him, the Supreme Court Bench of Justices L Nageswara Rao and MR Shah held that 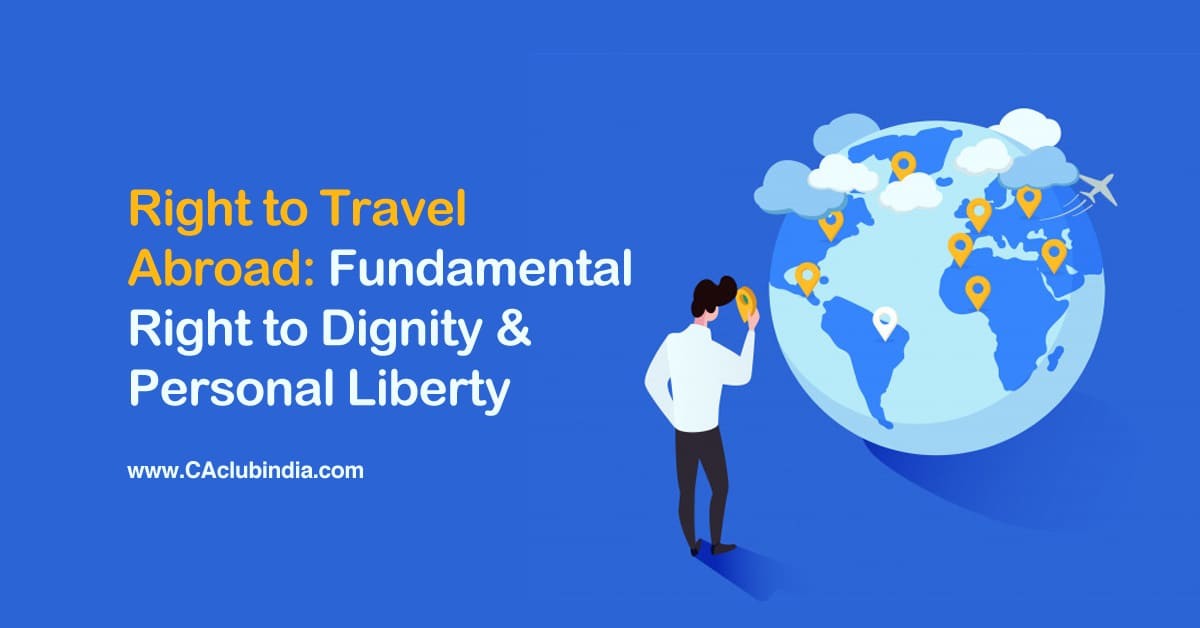 'The right to travel abroad is an important basic human right for it nourishes independent and self-determining creative character of the individual, not only by extending his freedom of action but also by extending the scope of his experience. The right also extends to private life; marriage, family and friendship are humanities which can be rarely affected through the refusal of freedom to go abroad and clearly show that this freedom is a genuine human right. ”

Hon'ble Special & Sessions Court at Rouse Avenue allowed Robert Vadra to travel abroad for a period of six weeks on account of his health reasons in an Enforcement Directorate Case pending against him.

Hon'ble Delhi's Rouse Avenue allowed congress leader and former Shashi Tharoor to travel abroad to UAE, France and Norway, who is facing trial in Sunanda Pushkar's death case and is currently on bail.

Hon'ble Special Court in Delhi allowed businessman CC Thampi to travel to UAE, who is currently out on bail in connection with a money laundering case pertaining to the overseas properties related to Robert Vadra, to travel abroad with certain conditions including not to tamper with evidence.

Hon'ble Special Court in Delhi allows Congress MP Karti Chidambaram to travel to the UK and France. He will, however, have to provide a copy of his itinerary to the Central Bureau of Investigation (CBI) before leaving the country.

Hon'ble Supreme Court time and again has confirmed that Right to travel abroad is the most cherished Fundamental Right as envisaged in Article 21 of the Constitution of India and the same cannot be taken away except according to the procedure established by law.

However, before allowing the accused to travel abroad the courts have to be satisfied that:

Is Auditor Certificate mandatory for DPT-3?

How to file DPT-3 in case of Loan from shareholder?

How can an Auditor report a disqualification of a director in the Audit Report?