The Government of India launched export promotion schemes under Foreign Trade Policy which aims to make Indian Goods/Services Cost Competitive in the Global Market, including various incentive schemes and Authorizations for Importers to save import Duty. The Government Schemes are designed in such a way that it provides the solution at every stage of exporting goods and services.

At Production Stage:-There are the Duty exemption schemes under which inputs required to manufacture export goods can be imported without paying customs duty and Duty Remission schemes give the refund of all the taxes paid in the process of the manufacturing on the export goods.

Transport:- Transport Marketing Assistance Scheme is the initiative for the expansion of the Agricultural sector to reduce the transportation charges.

GST Concessions:-There are two ways export can be done under GST - 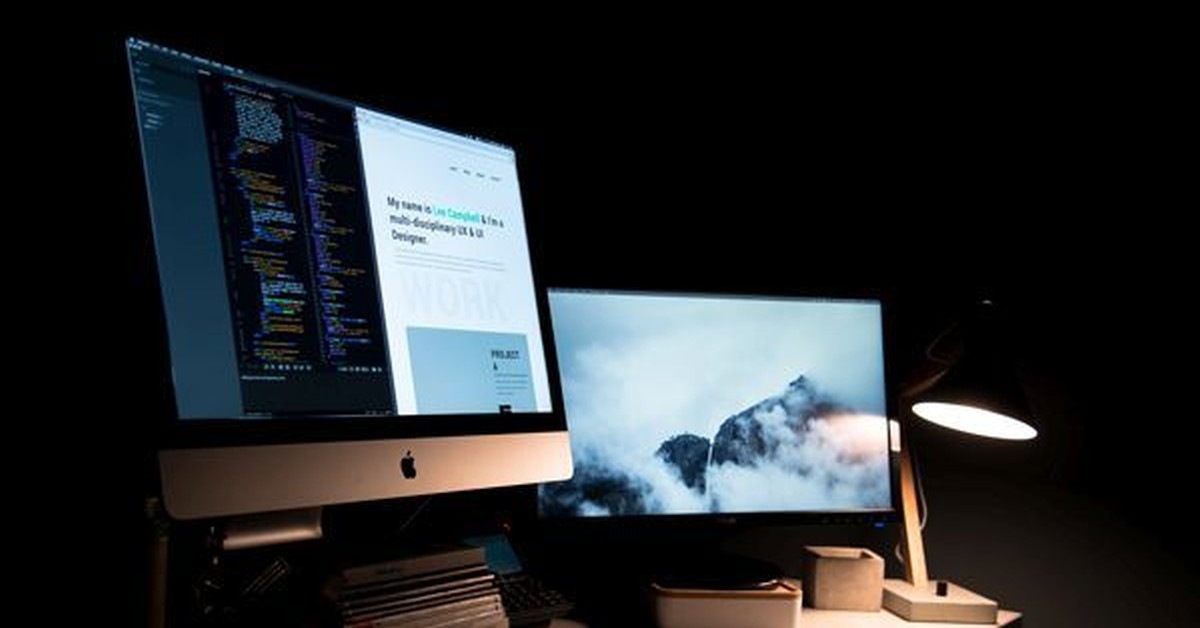 2) IGST Refund: IGST paid on the exports can be refunded by filling application with the help of shipping bills and other supporting documents.

Technological Upgradation:- License issued underEPCG Scheme to allow the duty free import of Capital goods/Machinery for technology upgradation with the condition to fulfill the export obligation.

For Ease of doing business:- SEZ Scheme/EOU Scheme/EHTP Scheme /STP Scheme/BTP Schemes introduced to provide the competitive environment for the exports to the companies engaged in 100% export and the application can be done online under the given schemes.

In this article we will understand Each Government Scheme in detail, the diagram given below categorize the export promotion Schemes in the following category -

To Promote the exports from the Country Government introduced Export Incentive Schemes which provide the Benefits on notified goods and services in the form of transferable Duty Credit Scrips, which can be used to waive of the import duty or it can be sold in the Market at discounted rate of the face value of scrips. 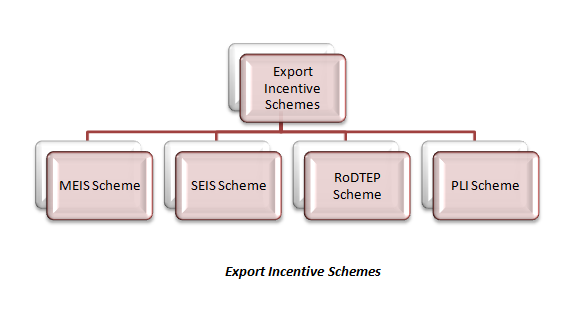 Merchandise Exports From India Scheme (MEIS) is the Government Incentive Scheme introduced in the Foreign Trade Policy 2015-20 as new schemes replacing earlier schemes present in Foreign Trade Policy 2009-14.It was in effect from 1st April 2015. The aim of MEIS Scheme is to offset infrastructural inefficiencies and associated costs involved in export process.

MEIS Scheme was launched to give benefits of 2% - 7% of the FOB value of eligible exports in the form of Duty Credit Scrip to the goods exporters ,Manufacturer exporters &Merchant exporters who are in export of goods can apply for MEIS benefits

Rebate of Duties or taxes on the export products (RoDTEP) Scheme:-

RoDTEP stands for Rebate of duties or taxes on the export products, is a incentive scheme launched on 13th March 2020 by the Government. The Union cabinet of India approved the discontinuation of MEIS Scheme and replaced MEIS Scheme with RoDTEP Scheme which will be implemented in a phased manner, that means the when the benefits rate under RoDTEP will be notified for a product at the same time MEIS Benefits shall be discontinue for that specific product. It may come in effect from April 2021 and will be in effect till 31st March 2025.

Service From India Scheme(SEIS) is the Government Incentive scheme launched in foreign Trade Policy 2009-15. Objective of the scheme is to promote exports of notified services from India. It came in effect on 1st April 2015 and will be in effect for 5 Years.Like MEIS Scheme, Duty Credit Scrip is issued as reward under SEIS Scheme which is transferable and having the validity of 24 months from date of issue.

PLI Scheme a financial incentive scheme which was introduced on 1st April 2020 by the IT ministry as a part of the National Policy on electronics for large scale electronics manufacturing. Under PLI Scheme benefits of 4% to 6% on incremental sales of electronic products including Mobile phones and electronic components, It is applicable from 1st August 2020 and will be in effect for 5 years.

The Government has allocated Rs 40,951 crore for the incentive for 5 years. Objective of the scheme is to develop Mobile Manufacturing ecosystem in India. 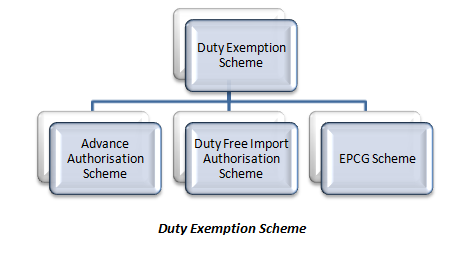 Advance License can be issued to a Manufacturer exporter or a Merchant exporter tied to a supporting manufacturer.

Any Exporter having an IEC Code and intending to import/domestically procure machinery for the production of the export products is eligible for the EPCG Scheme. 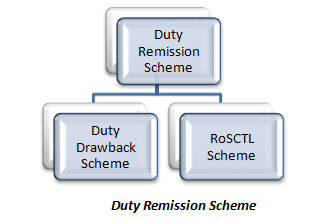 Duty Drawback scheme is administered by Department of Revenue (DIR), under Duty Drawback Scheme goods obtained from duty paid raw materials are exported first and after which refund can be claimed and there are two ways to claim a refund under this scheme: 1) All Industry rates 2) Brand rates.

RoSCTL (Rebate of State and Central taxes and levies) Scheme:-

Apart from Export incentive Schemes The Government is providing the financial support infrastructure facilities are given to the exporters from time to time for export promotion. The Diagram given below gives the classification of other schemes.

Status holder Certificate or export house certificate issued by the DGFT to the Indian exporters after achieving a certain level of export performance, it is given under one star, two star, three star, four star, five star certificate after fulfilment of minimum export condition.

TMA was launched to makeIndian agricultural products competitive in the global market by reimbursing the freight cost up to a certain amount, It is applicable to the products covered under chapter 1 to 24 under FTP and came in effect from 01/03/2019.

Market Development Assistance (MDA) Merged into the Market Assistance Initiative Scheme. It was launched on 16th February 2018 to provide the financial supports are provided to the eligible agencies for Market Access Initiatives including the following -

Under TEE Scheme towns producing the goods worth of Rs. 750 crores or more are notified as towns of export excellence for potential growth in exports.

These schemes are providing the favorable ecosystem to the companies which are engage in 100% export. Units which are registered under EOUs get the following benefits -

Interest Equalization Scheme was launched by the Government to provide pre and post shipment export credit to the exporters, Under IES Scheme 5% Interest support given to all manufacturers and 3% support to all Merchant exporters.

The author of the article is Mr. Keval Shah, Founder & CEO at Afleo Consultants, an Exim Consultancy firm based in Mumbai. Afleo Consultants is a leading DGFT consulting firm, providing consultation with respect to all the Export promotion schemes/Export Incentives in India namely MEIS/SEIS/RoDTEP/Advance License/EPCG/TMA/DFIA/RoSCTL Schemes.