A. EXTANT PROVISIONS UNDER COMPANIES ACT 1956

Section 224 of the Companies Act 1956 mandates every company to appoint an auditor or auditors at each annual general meeting to hold office from the conclusion of that meeting until the conclusion of the next annual general meeting.  The section further requires that the company needs to intimate the auditor so appointed within 7 days of the appointment and the auditor in turn needs to intimate the Registrar of Companies about his acceptance or refusal within 30 days of receipt of intimation of appointment from Company. The section also specifies the number of companies of which a person can act as Auditor at a given point of time.

Section 227 of the Companies Act contains that an auditor has to make a report to the members of the company on the accounts examined by him and on every balance sheet and profit and loss account and on every other document declared by the Act to be part of or annexed to the balance sheet or profit and loss account, which are laid before the company in general meeting during his tenure of office.

The report shall state whether in the auditor’s opinion and to the best of his information and according to the explanations given to him, the accounts –

- give the information as required by the Act

- in the manner so required

- and give a true and fair view of the state of affairs of the company.

The auditor shall also state the following in his report:

• whether he has obtained all the information and explanations which to the best of his knowledge and belief were necessary for the purposes of his audit,

• whether, in his opinion, proper books of account as required by law have been kept by the company so far as appears from his examination of those books, and proper returns adequate for the purposes of his audit have been received from branches not visited by him,

• whether the report on the accounts of any branch office audited under section 228 by a person other than the company’ s auditor has been forwarded to him as required by clause (c) of sub- section (3) of that section and how he has dealt with the same in preparing the auditor’ s report;

• whether the company’ s balance sheet and profit and loss account dealt with by the report are in agreement with the books of account and returns,

• whether, in his opinion, the profit and loss account and balance sheet complied with the accounting standards referred to in sub-section (3C) of section 211,

• whether any director is disqualified from being appointed as director under clause (g) of sub-section (1) of section 274.

Observations/Remarks by Auditors in Audit Reports

Section 227 specifies that any observations or comments of the auditors which have any adverse effect on the functioning of the company need to be in thick type or in italics. Further if any point in the report is answered inthe negative or with a qualification, the auditor’s report shall also state the reason for the answer.

Sub-Section 4A of Section 227 contains that the Central Government may, by general or special order, direct that, in the case of such class or description of companies as may be specified in the order, the auditor’s report shall also include a statement on such matters as may be specified therein.

B. APPLICABILITY OF CARO –

It shall apply to every company including a foreign company as defined in section 591 of the Act, except the following:- 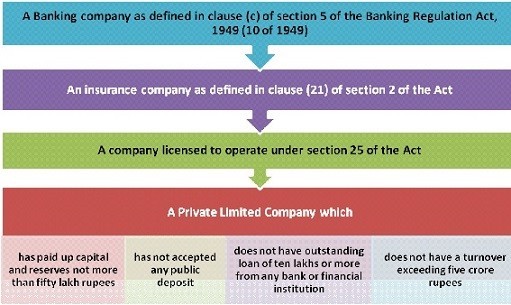 C. REVISION IN FORM AND CONTENT OF AUDITORS REPORT

SA 700 was originally issued in the year 2003 by the ICAI and was then known as Auditing & Assurance Standard (AS) 28 corresponding to the International Standard on Auditing (ISA) 700. The 2008 crisis shook the confidence of the users of financial statements and brought to light, the need for greater transparency and information in the auditor’s report. Responding to the above needs, IASSB revised its ISA 700 and split it into three standards, namely –

Correspondingly, ICAI revised its SA 700 (AAS 28) in the year 2010 and issued three separate Standards on Auditing (SA) to deal with the form and content of an independent auditor’s report as also the various types of opinion that may be included in the auditor’s report corresponding to the aforementioned ISAs. The standards are:

Given below is a brief highlight of SA 700(Revised), SA 705 and SA 706 for easy understanding and reference. Readers are requested to refer to the complete text of the respective SAs to understand them in totality.

SA 700 (REVISED) – FORMING AN OPINION AND REPORTING ON FINANCIAL STATEMENTS

• The Auditors report shall be in writing – hard Copy or report using electronic format.

• It shall have a title that clearly indicates that it is the report of an independent auditor.

• The auditor’s report shall include sections and headings as under:

- Management’s [or other appropriate term] Responsibility for the Financial Statements

The auditor’s report shall be signed and dated and shall also contain the place of signature along with membership number of the auditor signing the report and the FRN of the firm, as applicable.

An illustrative format of the Auditor’s Report as per SA 700(Revised) can be accessed from the following link:

SA 705 deals with the auditor’s responsibility to issue an appropriate report in circumstances when, in forming an opinion in accordance with SA 700 (Revised), the auditor concludes that a modification to the auditor’s opinion on the financial statements is necessary.

It establishes three types of modifications to the opinion, as discussed below.

Circumstances in which a modification is required

(a) The auditor concludes that, based on the audit evidence obtained, the financial statements as a whole are not free from material misstatement; or

(b) The auditor is unable to obtain sufficient appropriate audit evidence to conclude that the financial statements as a whole are free from material misstatement. 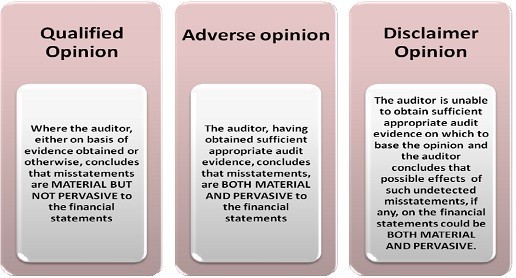 Illustration on Types of Modified Opinion

The table below illustrates how the auditor’s judgment about the nature of the matter giving rise to the modification and the pervasiveness of its effects or possible effects on the financial statements, affects the type of opinion to be expressed:

•When the auditor modifies the audit opinion, the auditor shall use the heading “Qualified Opinion”, “Adverse Opinion”, or “Disclaimer of Opinion”, as appropriate, for the opinion paragraph.

• The financial effect of the misstatement shall be quantified as far as practicable, else the auditor needs to specify that same in the report.

Further as required under Section 227(3)(e) of the Companies Act, 1956, the basis for qualification and the qualified opinion paragraphs should be in bold or italics.

F. IMPLICATION ON SA 706 – AUDITORS REPORT WITH EMPHASIS OF MATTER

SA 706 deals with additional communication in the auditor’s report when the auditor considers it necessary to:

(b) Draw users’ attention to any matter or matters other than those presented or disclosed in the financial statements that are relevant to users’ understanding of the audit, the auditor’s responsibilities or the auditor’s report.

Meaning of “Emphasis of Matter” and “Other Matter”

• A clear reference to the matter being emphasized and where the same can be found in the financial statements shall be given in the report.

• The Auditor shall indicate that auditor’s opinion is not modified in respect of the matter emphasized.

COMPARATIVE ILLUSTRATION OF FORMAT OF AUDITOR’S REPORT (NON-MODIFIED) BEFORE AND AFTER APPLICABILITY OF SA 700 (REVISED) – AUDIT OF FINANCIAL STATEMENTS PREPARED UNDER COMPANIES ACT, 1956

Comparative Illustration of Format of Auditor’s report as per SA 700 (Revised) and SA (Revised) with SA 705 and SA 706 - Audit of financial statements prepared under Companies Act, 1956