Introduction:  As 30th June, 2019 is fast approaching the GST Practitioners, auditors and assessees are involving themselves in filing annual return GSTR 9 and 9C. Filling every table in the GSTR 9 is not that much easy as any wrong filling will result in remitting back  the amount particularly on account of ITC mismatch in 2A and 3B by the Assessee or an account of debit notes, amendments, wrong utilization of ITC, RCM etc. There is no revision option in GSTR 9, as of now, and the whole industry is expecting some changes in the ensuing 35th GST council meeting slated on 20th June, 2019 headed by new union finance minister, Mrs.Nirmala Seetharaman. In this article let us see  what is deemed exports under the GST Act and where such turnover is to be shown in the Annual Return GSTR 9.

'Deemed exports' generally refer to those transactions under which supply of goods do not leave the country, and payment for such supplies is received in Indian Rupees shall be treated as 'deemed exports', provided that goods are manufactured or produced in India.

In other words, deemed export includes certain transactions which though do not qualify as export of goods but refund of GST is awarded to them. Certain supplies of goods which are manufactured in India and:

Subject to certain conditions, Refund of tax paid can be claimed by either of the following persons:

The recipient is not eligible to claim the input tax credit (ITC) in case refund of tax paid is being claimed by the supplier.

CBIC notified list under the category of Deemed Exports under GST regime. The notification and circular were issued by the CBIC on dated 18th October 2017 and 6th November 2017 respectively detailing the Deemed Export procedure. 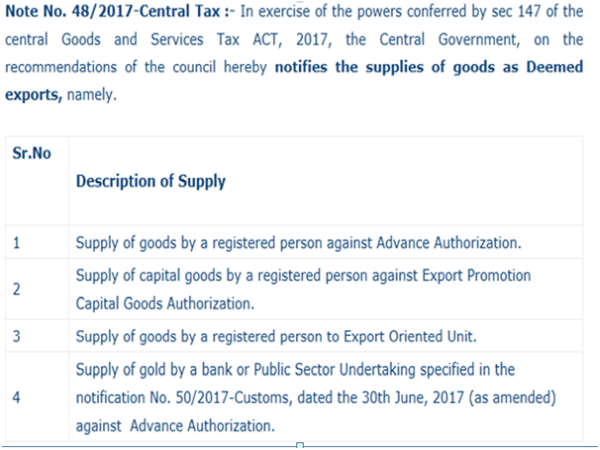 The outward supplies made to the above category should have been reported in Table 6C.

Return in GSTR 3B

The outward supply of deemed exports is to be reported in table 3.1 (b) with other zero-rated supplies.

The sum total of the deemed exports value should be declared in Table No.4E i.e. Table 6C of Form GSTR1 may be used for filling up these details.

Section 147 allows the Government to notify certain supplies of goods to be deemed exports. The deeming fiction of this kind of supply as deemed export allows a person to enjoy all the tax benefits as available in case of zero rated supply.

The author is a whole time director in Ms Lore Tax Professionals Private Ltd, Coimbatore and can be reached at renga42002@yahoo.co.in.