The Ministry of Corporate Affairs (MCA) vide its order dated 13/07/2018 has constituted a 10- member committee to review the penal provisions which have criminal liability under the Companies Act, 2013.

Committee has been formed to review the existing penal provisions having criminal liabilities, where “Decriminalization” can be undertaken. This would allow the trial courts to pay more attention to offences of serious nature. It’s a welcome step of Ministry which will give relief to Corporates in India.

Rational Behind the Move:

The new Companies Act, 2013 introduced more stringent punishments and penalties for non-compliance of various provisions and rules under the Act as compared to the former Companies Act, 1956. After four years of implementation of the Act, Ministry’s decision to revisit the penal provisions for Decriminalization of certain offences under Companies Act will give major relief to the Industry and will provide ease of doing business in India. Moreover, this move will unclog the Tribunals which are overburdened with plenty of pending cases, to focus on more serious violations.

The term “Decriminalization of offences” has not been defined anywhere but as the name suggests, it can be understood by literal meaning that wherever in the Companies Act, penalty of imprisonment is imposed on the contravention of any provision, those provisions will be covered under the criminal liability of officer in default of the company and Decriminalization will refer to reduce those penalties which involve imprisonment in case of any contravention. To understand decriminalization in a simple manner, first we can categorize offences under Companies Act based on the following type of punishments:

The decriminalization will re-categorize above offences in which punishment in terms of Imprisonment, either by diluting to optional imprisonment or further diluting by imposing fine with prescribed conditions/grounds as may be deemed fit. So, we can say for de-criminalization only above First two types of offences would be considered.

Under the Companies Act, it is always a matter of debate that offences committed under this Act should not be covered under criminal proceedings but should be of civil nature because corporates are doing their business only not any crime and they also contribute towards the economic development of the country.

Offence under the Companies Act may further be classified into compoundable and Non-Compoundable Offence. 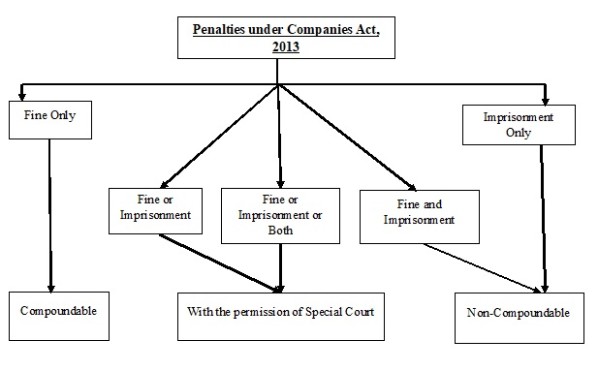 Now, this 10- member committee appointed by Corporate Affairs Ministry is expected to check penal provisions of Companies Act involving imprisonment if certain offences can be decriminalized, as follows:

1. Offences which are punishable with Imprisonment mandatory, can any of such offences can be categorized into offences in which imprisonment be optional or some additional fine;

2. Offences for which Imprisonment is optional, can any of such offence be categorized into offences with fine only;

Hence, offences which are earlier non-compoundable may be made compoundable. This will avoid time-consuming litigation and promote ease of doing business.

Note: This write up is based on what 10-member committee would be doing and with which objective it has been formed. However, another detailed deliberation on penal provisions would be required to submit before the committee by Industry members so that their participation in this action of decriminalization can be considered, which ultimately benefit to the industry by relaxing harsh penal provisions of the Companies Act, 2013.