Confused about Rupee vs Dollar fight?

'Mom, the value of Rs. has increased from 65 to 69 and eventually to 72 in last1year. Instead of appreciating the Modi Government, why's everyone criticising them?', Rahul asked her mother, Sonia, curiously.

Like Rahul, many of us fail to understand that when the value of rupee is increasing every day, why is it being called 'Depreciation in the value'.

Understand it this way -

Thus, the value of Rs. has depreciated in terms of $.

Is it beneficial for some people? 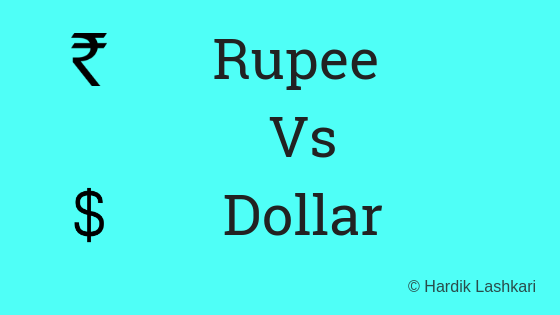 Rahul is a software developer who provides services to US Based companies. In return, those companies pay him the professional services in US Dollars.

Hence, for Rahul and all other exporters, the depreciation in value of rupee is beneficial.

Again, Mr. Ramchand settled in the US sends remittance of $5,000 to his family in India every month. Now, his family will receive more money in Rupees than before.

Hence, for Ramchand and all other NRIs, the depreciation in value of rupee is beneficial since they can send more remittance to India.

How is it bad for others?

Garima goes on a holiday to the US every year with her husband. She allocates a budget of Rs. 2,00,000 for the holidays, but now with the decreasing value of rupee, the cost of holidays would be higher since she has to pay the travel and accommodation in $, not in Rs.

Hence, for her and all other travellers, the depreciation means expensive holidays and trips.

Likewise, all the imports in India will cost more since the Indian Companies have to pay the importers in US Dollars amount, and not in Indian Rupees. If they were paying $10,000 earlier, they were actually paying Rs. 6,30,000, but not it would cost Rs. 7,20,000.

Why is the value of Rs. depreciating?

Although you might have understood the benefits and losses of depreciating Rs. value, it is indispensable to understand the rationale behind it.

Crude oil prices have exceeded $75 per barrel over the last few months. India imports almost 80% of the fuel, and it has to pay for the fuel in US Dollars. This means, the rising oil prices have increased the dollar payment bill for India, due to which demand of $ has increased.

Better performance from US Economy

US's economy has grown 4.1% in the second quarter this year, which has led to better performance of US Dollars in International Currency Market. Employment has been created, apart from the increment in average wages. Overall, the US Dollar has strengthened.

China - USA trade war is being seen as a beginning of a new cold war since both the countries are increasing duties on each other's goods. This has resulted in a weaker rupee as compared to US Dollars.

It can be a blessing in disguise- For Current Account Deficit!

Current Account Deficit increases when imports exceed the exports of a country. India's current account deficit is expected to widen up to 2.8% of the GDP this financial year.

Now, since the depreciation of the rupee has made the imports expensive and exports more profitable, exports will increase, and the imports will somehow reduce.

Overall, the current account deficit may reduce due to the depreciation in value which will strengthen the Indian Economy.

The author is a Content Writer and a Tax Consultant, working with various startups, media houses and Fintech companies of India and internationally.