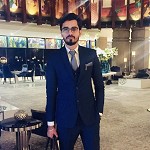 Offence: As per section 3(38) of General Clauses Act, 1897 "Offence" shall mean any act or omission made punishable by any law for the time being in force.

Compounding of offence: In today's Corporate world, good governance means to comply with all the provisions of Corporate laws. Non compliance will result in penalties or penalties with imprisonment. Corporate offences are classified into civil and criminal offences. Further it has been classified as Compoundable and Non compoundable offence. The Compounding of offences is a short cut method to avoid litigation.

Section 441: The provisions pertaining to compounding of offences under Companies Act, 2013 ("the Act") are set forth under Section 441 of Act. The offences, which are punishable with fine, only can be compounded either by Regional Director (hereinafter called "RD") or by the National Company Law Tribunal (hereinafter called NCLT). In other words, the offences, which are punishable with imprisonment only or imprisonment and fine, cannot be compounded. Under whose authority shall a petition lie:

• If the fine does not exceed Rs. 5 lakhs, the offence can be compounded by the RD or any other officer as may be authorized by the Central Government.

• If the offence is punishable with fine exceeding Rs 5 lakhs, the same can be compounded by the NCLT.

A detailed "Table" indicating the sections, subject matter, amount of fine imposable by the Authority, Tribunal and Special Court before whom the petition shall lie is given separately as per ANNEXURE-I.

Restriction on compounding: The third proviso to sub-section (1) of Section 441 says that

(a) The offence cannot be compounded either by the Company or its officer in case either the investigation has been initiated or is pending.

(b) The offence cannot be compounded in case similar offence committed by it has been compounded and period of three years has not expired.

What is new in Section 441: The "Third" proviso to Section 441 of Companies Act, 2013 says that in case where either the investigation has been initiated or is pending, the offence cannot be compounded. However, in old Section 621A of Companies Act, 1956, there was no such embargo. In other words, offence could have been compounded notwithstanding the fact that either the investigation has been ordered or is pending against the company.

Explanation: After the expiry of three years from the date of compounding of offence, if the second or subsequent offence had been committed, the same shall be treated as the first offence.

Procedure for compounding of offences under the Act, 2013:

As per Section 403 read with Rule 12 of Companies (Registration Offices and Fees) Rules, 2014, the compounding application has to be made to ROC by filing e-Form GNL-1.

The following figure explains the process: 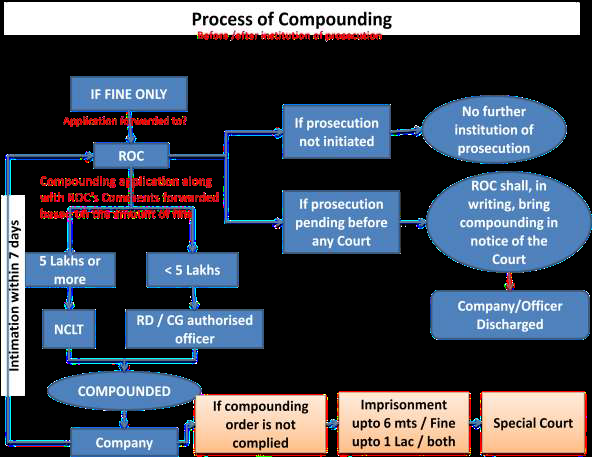 Post compounding obligation: Wherein the offence has been compounded, either before or after the institution of any prosecution, an intimation shall be given to the Registrar of Companies within seven days from the date on which, the offence is so compounded. In case the offence has been compounded before the institution of any prosecution, no prosecution shall be filed either by ROC or by any shareholder or by any person authorized by the Central Government. It is needless to point out that the period of seven days shall be reckoned from the date, the order is made available to the petitioner/applicant.

ANNEXURE-I LIST OF COMPOUNDABLE OFFENCES UNDER THE COMPANIES ACT, 2013.

As evident from the table above, majority of the offence under Act, 2013 can be compounded by the Regional Director and few extreme cases by the NCLT. Some of the offences can be compounded by any of the concerned authorities as some of it involves the case of additional or further fine where there is no possibility of assumption on the maximum amount of fine as it depends on the period of default of the defaulter.

DISCLAIMER: This write up is based on the understanding and interpretation of author and the same is not intended to be a professional advice.

The author can also be reached at shubhamkatyal37@gmail.com