Can we time the market?


Should we wait for the stock to fall before buying? Shall we wait before we sell? If you are an investor in the stock market you would have also asked these questions at some point. Naturally these are relevant questions as one would like to maximise one's money. If one could buy the stock at it's lowest and sell at its highest one would maximise one's returns.

However, the question arises how does one know which is the lowest point for a stock and which is the highest. While it is easy to know in hindsight, it is practically impossible to know which would be the lowest a stock could go to and the highest it could climb to. Peter Lynch, the great stock market investor has said the following on the subject of timing the market, "I can't recall ever once having seen the name of a market timer on Forbes‘annual list of the richest people in the world. If it were truly possible to predict corrections, you'd think somebody would have made billions by doing it." 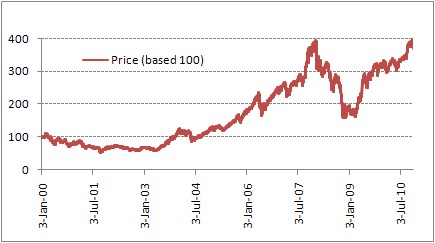 However, we at Equitymaster for the benefit of our readers decided to analyse what would have happened had we been blessed with the gift of knowing exactly when the market would be at its lowest and at its highest in the last 10 years. For this purpose we decided to look at the broad market index and selected the NIFTY for our analysis. As it can be seen from the graph, the NIFTY was at its lowest on 21st September 2001 while it was at its highest on 5th November 2010.

But let us consider a second scenario. This approach is one of buying when we believe the market is cheap and selling when it is expensive. For our study we have considered the market cheap at 15 times TTM (trailing twelve months) earnings and expensive when the market is trading at 21 times its TTM earnings. We have also considered that when we re-enter the market we will reinvest the entire sum that we received when we had exited on the previous occasion. From the graph below we can see that there were four opportunities to enter and exit the market at our decided parameters. 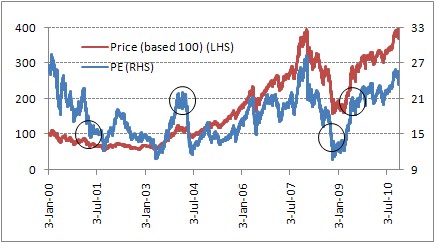 Our portfolio is illustrated in the table here under.

By simply ignoring the market noises and taking a disciplined approach we have could have made a point to point return of 722% or 23.5% annually.

Clearly an investor can expect higher returns by just having a disciplined approach and simply buying when the market is cheap and selling when it turns expensive. One does not have to wait for the deep correction or the big rally to make money. When the possible upside potential for a stock is clear, investors should take their own decisions depending on the expected gains. It is better to exit when they believe that the stock is trading expensive rather than holding on. While it is not necessary that the stock prices will not keep going north even after selling the stock, but it is better to be cautious than to be sorry later on.