Arrest under GST is not cakewalk for department


The arrest under Goods and Service Tax is not cakewalk and it can be done only under exceptional circumstances with due process of law. The scheme of the CGST Act, 2017 is very much clear in regard to arrest mandated under Section 69 of the Act and the same needs to be exercised sparingly with lot of care. The primary object and purpose of GST Act is not penal but to recover the dues payable under the Act. It is also trite law that the power of arrest can be exercised only after the liability is quantified with due assessment. Needless to say, that the arrest directly deprives person from his right of liberty protected under Article 21 of the Constitution of India and power of arrest is to be used with great circumspection and not casually.

At the very outset, it is pertinent to mention here that the CGST Act, 2017 is compoundable in nature in terms of Section 138 of the Act being so arrest is not necessary for alleged commission of offence which is compoundable in nature. Section 138 says "any offence under this Act may either before or after the institution of prosecution, be compounded by the commissioner on payment….". 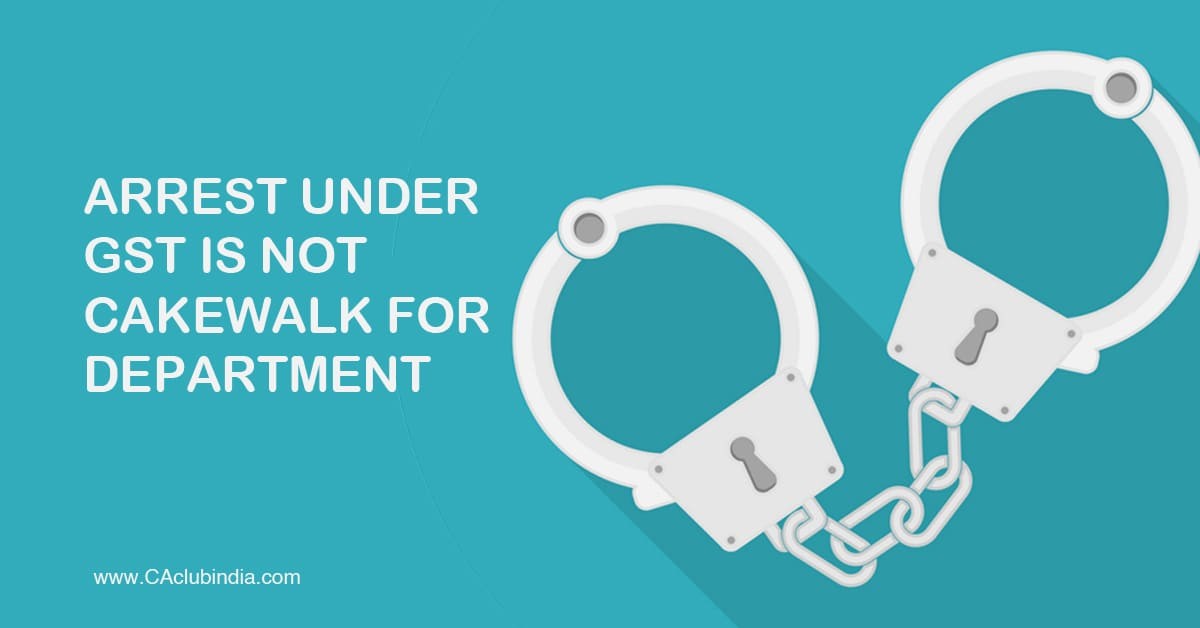 Further, Section 132 of the Central Goods and Service Tax prescribed provisions of punishment and the maximum sentence prescribed under the Act is five years and it is directly linked with quantum of evasion of tax. It is settled law that when the punishment is less than seven years or which may extend to seven years, provisions of Section 41 and 41A of the Code of Criminal Procedure, 1973 need to be followed. In the cases, where punishment is less than 7 years, the person can be arrested only when conditions of Section 41 (1) (b) of the Cr.P.C are satisfied. Section 41 (1) (b) reads as under:

"41. When police may arrest without warrant. - (1) Any police officer may without an order from a Magistrate and without a warrant, arrest any person -

(a) Who commits, in the presence of a police officer, a cognizable offence;

(b) against whom a reasonable complaint has been made, or credible information has been received, or a reasonable suspicion exists that he has committed a cognizable offence punishable with imprisonment for a term which may be less than seven years or which may extend to seven years whether with or without fine, if the following conditions are satisfied, namely: -

(i) The police officer has reason to believe on the basis of such complaint, information, or suspicion that such person has committed the said offence;

(ii) The police officer is satisfied that such arrest is necessary -

(a) To prevent such person from committing any further offence; or

(b) For proper investigation of the offence; or

(c) To prevent such person from causing the evidence of the offence to disappear or tampering with such evidence in any manner; or

(d) To prevent such person from making any inducement, threat or promise to any person acquainted with the facts of the case so as to dissuade him from disclosing such facts to the Court or to the police officer; or

(e) As unless such person is arrested, his presence in the Court whenever required cannot be ensured;

And the police officer shall record while making such arrest, his reasons in writing:

Provided that a police officer shall, in all cases where the arrest of a person is not required under the provisions of this sub-section, record the reasons in writing for not making the arrest.

So, section 41(1) (b) clearly provides provision under which arrest can be done and person can be arrested only when necessary condition of section satisfied.

Apart from this, Section 41A of the Cr. P.C prescribed provision where the arrest of person is not required under Section 41 (1) Cr. P.C. Section 41A of CRPC reads as under:

"41A.  Notice of appearance before police officer. - (1) The police officer shall, in all cases where the arrest of a person is not required under the provisions of sub-section (1) of Section 41, issue a notice directing the person against whom a reasonable complaint has been made, or credible information has been received, or a reasonable suspicion exists that he has committed a cognizable offence, to appear before him or at such other place as may be specified in the notice.

(2) Where such a notice is issued to any person, it shall be the duty of that person to comply with the terms of the notice.

(3) Where such person complies and continues to comply with the notice, he shall not be arrested in respect of the offence referred to in the notice unless, for reasons to be recorded, the police officer is of the opinion that he ought to be arrested.

(4) Where such person, at any time, fails to comply with the terms of the notice or is unwilling to identify himself, the police officer may, subject to such orders as may have been passed by a competent Court in this behalf, arrest him for the offence mentioned in the notice.

A bare perusal of the aforesaid both sections of Cr.P.C, it is clear that the cases where punishment is less than 7 years arrest cannot be done casually and without fulfilling the conditions. The arrest under section 41 of Cr.P.C can be done when condition mentioned in sub-clause (b) satisfied. Further, in cases where arrest of person under section 41(1) is not required, the officer as per section 41A will issue notice to alleged person. It is needless to say when such person complies and continues to comply with notice, he shall not be arrested by department. That means if department issued summon for appearance and if summoned person joined the investigation time to time, he cannot be arrested.

This issue has been settled long back by Hon'ble Supreme Court in the matter of Arnesh Kumar Vs State of Bihar and Another [2014 (8) SCC 273]. The Hon'ble Court while discussing the Section 41 and 41A held that direction issued herein, the same shall apply to all such cases where offence is punishable with imprisonment for a term which may be less than seven years or which may extend to seven years, the police officer shall not arrest the accused unnecessarily and magistrate shall not authorize detention casually and mechanically. The Hon'ble Court further held that failure to comply with these directions, shall apart from rendering police officers concerned liable for department action and also make them liable to be punished for contempt of court.

As stated above, the power of arrest is exceptional and it can be used sparingly and the same cannot be used by department to terrorize the business. The Hon'ble Punjab and Haryana High Court at Chandigarh in the matter of Akhil Krishan Maggu Vs DG GST Intelligence [2020 (32) GSTL (516) (PH)] settled this issue and clarified exceptional circumstances under which arrest can be done by the department. The relevant para of the judgment reads as under

"10. Taking cue from judgment of Delhi High Court in the case of MakeMytrip (supra) followed by Madras High Court in the case of Jayachandran Alloys (P.) Ltd. (supra), law laid down by Hon'ble Supreme Court in the case of Siddharam Satlingappa Mhetre (supra) as well keeping in mind Sections 69 and 132 of CGST Act which empower Proper Officer to arrest a person who has committed any offence involving evasion of tax more than Rs. 5 crore and prescribed maximum sentence of 5 years which falls within purview of Section 41A of Cr.P.C., we are of the opinion that power of arrest should not be exercised at the whims and caprices of any officer or for the sake of recovery or terrorizing any businessman or create an atmosphere of fear, whereas it should be exercised in exceptional circumstances during investigation, which illustratively may be:

(i) a person is involved in evasion of huge amount of tax and is having no permanent place of business,

(ii) a person is not appearing in spite of repeated summons and is involved in huge amount of evasion of tax,

(iii) a person is a habitual offender and he has been prosecuted or convicted on earlier occasion,

(iv) a person is likely to flee from country,

(v) a person is originator of fake invoices i.e., invoices without payment of tax,

(vi) when direct documentary or otherwise concrete evidence is available on file/record of active involvement of a person in tax evasion.

In additional to aforesaid exception, it is trite law that the power of arrest can be exercised only after the liability is quantified with due assessment. This settled law by Hon'ble courts cannot be overlooked by department. The Hon'ble Punjab and Haryana High Court in the matter of Akhil Krishan Maggu and Anr (Supra) examined this issue and held as under:

"10.1 The persons who are having established manufacturing units and paying good amount of direct or indirect taxes; persons against whom there is no documentary or otherwise concrete evidences to establish direct involvement in the evasion of huge amounts of tax, should not be arrested prior to determination of liability and imposition of penalty…."

The aforesaid judgment (Akhil Krishan Maggu) has been passed while relying on the judgment of Jayachandran Alloys (P) Ltd Vs Sup CGST [ 2019 (25) GSTL 321 (mad)] passed by Hon'ble High Court judicature at Madras. The Hon'ble High court as held as under:

"……. I am of the considered view that the power to punish set out in Section 132 of the Act would stand triggered only once it is established that an assessee has ‘committed' an offence that has to necessarily be post-determination of the demand due from an assessee, that itself has to necessarily follow the process of an assessment".

That Hon'ble High Court of Madhya Pradesh in the matter of Jagdish Arora and another Vs UOI [2020 (41) GSTL 3 (MP)] while relying the Jaychandran Alloys (Supra) has held as under:

"…. Thus, it is submitted that the procedure adopted in the instant case, where arrest has been made without completion of assessment proceedings, runs counter to the established provisions of law. It is trite law that the power of arrest is to be used with great circumspection and not casually".

In view of aforesaid provisions and judgments passed by Hon'ble Courts, it is clear that arrest under Goods and Service Tax cannot be done casually and the same can be exercised under exceptional circumstances only after assessment of liability. The very purpose behind enactment of GST Act is not penal but to recover the government dues and department cannot arrest the persons on each and every case.

The author can also be reached at excise.custom@gmail.com