Approval of side pocketing in Mutual Funds

So the mutual fund will issue one unit to each person which translated into NAV = Rs. 10

The mutual fund invested the proceeds from subscription into debt papers of three companies (just for the sake of simplicity we are assuming three companies – Co. X, Co. Y & Co. Z) having highest credit rating.

So the amount collected (Rs. 300) was invested in a portfolio comprising three companies.

One of the major risk associated with debt investment is that of 'default'. Credit rating plays a very important role in ascertaining this risk. Companies with a high credit rating can raise funds at a very low cost where as companies with lower credit rating will have to shell out a higher interest rate.

But we have seen that (at least in two instances) there have been severe downgrade of credit rating in a very short span of time (recently in case of IL&FS and previously in case of Amtek Auto). These kind of defaults trigger panic among investors and they rush to take out their money from these schemes. This results in a redemption pressure on the scheme and NAV tends to fall.

In short factors such as credit risks result in fall of NAV in the short term (especially if the fund invests in liquid debt). 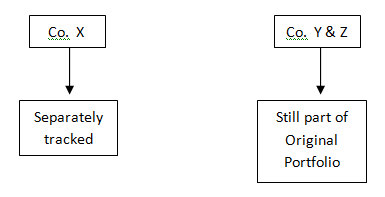 Due to such falls in NAV due to credit risk in a particular debt investment, the whole fund has to suffer even if the credit risk of other investments in the same fund remain intact.

Suppose in this case the unit NAV halves to Rs. 5/-. A new investor who wishes to invest in the scheme in such times will be at an advantageous position as he will get units at a low price.

Many a times such credit risk is short term and in the long term the defaulter company repays (when its financial situation improves). But the benefit of such repayment could not be taken by those investors who had already exited the fund in panic.

So in order to protect the NAV of a fund from such knee-jerk reactions, a mechanism has been developed to separate the defaulting company's investment from the total fund and monitor it separately. Ownership in it shall be allotted on a pro-rata basis to the existing investor. Future investors will not have any share whenever the invested amount is repaid by the defaulting company. The investment will remain in the fund but separately monitored. This way the NAV of the whole fund need not suffer. Further, whenever the company pays back in future the old investors will get their due.

Here I have taken only three companies. In reality there are several different factors such as active fund/passive fund, period of investment (whether in liquid debt or short term or long term debt).

However, my point is if 1 co. out of 10 defaults, the NAV of the whole fund should not suffer and that's why we have this concept of Side pocketing. There are various risks associated with side pocketing which we shall discuss separately.