An overview of GST

Winston Churchill has rightly said, “To improve is to change, to be perfect is to change often”

Change is inevitable and is very important because change leads to development and development leads to success.  As far as changes are concerned, Goods and Services tax (hereafter referred to as GST), is by far the biggest indirect tax reform in the history of India since independence.

As per proposed Article 366 of Constitution Amendment bill, GST means any tax on supply of goods, or services or both, except taxes on the supply of the alcoholic liquor for human consumption.

GST shall apply to all taxable supplies of goods and services made for a consideration, except for the following -

1. Goods or services outside the purview of GST (discussed further below)

3. Transections below the threshold limit. (It shall be specified in a notification issued by Central or State Government)

GST shall have two concurrent components-

i. CGST and SGST shall be levied on intra-State supplies of goods or services in India.

ii. On inter-State supplies of goods and services, IGST (Integrated GST) shall be levied and collected by the Centre.

iii. The tax revenue on account of IGST shall accrue to the Destination State. (Destination principle)

iv. The rate of IGST shall be approximately equal to sum of CGST and SGST (CGST+SGST).

IGST shall also be applicable to-

1. Import of goods and services (currently, in addition to Basic customs Duty, CVD and SAD are levied under Customs Act imports. After introduction of GST, IGST will be imposed against CVD and SAD)

GST will be a destination based consumption tax, as opposed to that of origin under the present system. So, to compensate the exporting states, in addition to IGST, 1% origin based tax is also proposed to be levied on inter-State supply of goods, which will be non-creditable in GST chain. This tax is proposed to be levied for initial 2 years, or such longer period as recommended by GST Council.

The additional 1% tax can have a negative impact on the government’s ‘Make in India’ campaign, as it favours international trade over intra-national trade. The Congress party is demanding the scrapping of this additional tax.

2. In case of inter-State supplies, the IGST model permits the utilisation of credit of IGST, CGST, and SGST for payment of IGST.

3. IGST credit can be utilised for payment of IGST, CGST and SGST in sequence by importing dealer for supplies made by him.

This will meet the objective of seamless credit chain to taxpayers located across different states. In the current tax system, no credit is allowed for input taxes which have been paid to some other government. When credit is not allowed, the input tax is added in the cost of goods, thus increasing the price of the good and leading to double taxation (cascading effect).

Let us take an example on IGST and Additional Tax

Export of goods and services shall be zero rated. (Nil rated)

Goods or services outside the purview of GST

GST shall be imposed under a comprehensive approach, covering all goods and services, except the following -

2. Real Estate – Stamp duty plus property taxes would continue to be imposed.

4. Petroleum Products. (to be bought under GST from date to be notified on recommendation of GST council)

The GST rates are to be based on RNR (Revenue Neutral Rate).It is a rate that would be levied so that the tax revenue of the government will at least remain same as the present tax system.

A panel under Chief Economic Adviser (CEA) Arvind Subramanian, constituted by the government to decide on the GST rates, has recommended a revenue-neutral rate of 15-15.5%. 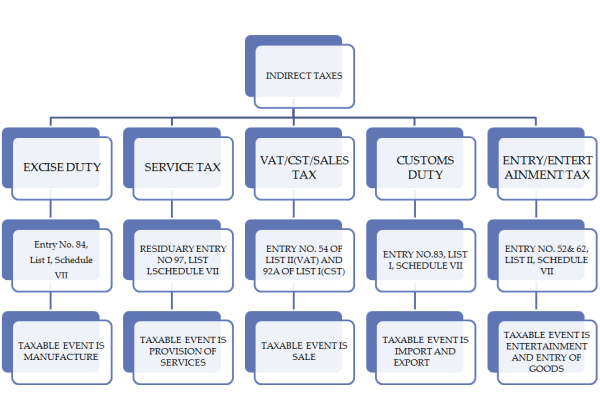 Taxes to be subsumed-

1. Excise Duty (including additional excise duties, excise duty under the Medicinal and Toilets Preparations (Excise Duties) Act, 1955) and Service tax will be known as CGST.

2. CST will be known as IGST (CGST+SGST approx.)

3. Local VAT and other state taxes will be known as SGST.

4. Custom Duty (Basic Customs Duty) shall continue to be levied.

5. In place of CVD and SAD, IGST will be charged.

a. Tax Cascading- CST is collected by origin state for which no credit is allowed by any level of government.

b. Confusion- Excise duty on manufacturing level in imposed on “goods manufactured or produced in India”, which gives definitional issues as to what constitutes manufacturing.

c. Complexity – In spite of improvements made in the tax design and administration over past few years, system at both Centre and State level remain complex. Tax administration leaves a lot to be desired. They are exposed to disputes and court challenges, which can be slow and expensive.

GST- Answer to all problems

GST is expected to rationalise and simplify the consumption tax structure at Centre and State level. Besides simplifying the current tax system and lowering cost of doing business, GST will also call for a fundamental redesigning of the value chain. It will affect how companies operate their business and the consumer demand in the country. Efforts will have to be made to transform the existing IT systems for implementation of GST which could be a challenging task for the IT department.

The major benefits of this proposal is as follows-

Benefits to the Government-

a. Improved collections (Tax booster) - It is speculated that GST will bring a raise in employment, promotion of exports and thus raise the profits of the government amounting to $15 billion a year, and raise GDP by 1.5-2%.

c. Broadening of tax base.

Benefits to the Corporate-

It will be beneficial for India Inc. as the average tax burden of the company will fall, reducing production cost.

Complete and comprehensive set-off of input goods and services and phasing out CST can make domestic goods cheaper and more competitive in the international market.

Roadmap and Way Forward to GST

a. 122nd Amendment bill introduced in Lok Sabha on December 2014 has been passed on 6th May, 2015 and referred to Rajya Sabha’s Select Committee.

b. The Select Committee submitted its report to the Rajya Sabha with some clarifications and recommendations in the bill.

c. Procedure for passage of Constitutional Amendment Bill is as follows–

ii. To be ratified by at least 50% of Sates (at least 15 states) in their respective assemblies.

iii. President to give assent of enactment.

Thereafter, GST Council will be constituted under proposed article 279A of the Constitution in the following manner-

- By the President within 60 days from the date of enforcement of the Constitutional Amendments.

- Consists of Union Finance Minister and Union MOS (Minister of State for Finance).

- Consists of all State Ministers of Finance.

- To make recommendations on-

d. GST Law to be introduced in Parliament/ State legislatures.

e. GST Network (GSTN), the IT backbone of GST shall be formed as Section 25 company to design automation of GST and to facilitate online registration, tax payment and filing of return.

Keeping into consideration the above mentioned facts, it can be concluded that GST will be a game changing reform for Indian economy, by developing a common market for goods and services and reducing the cascading effect of tax on the cost of goods and services. It will impact the Tax Structure, Tax Incidence, Tax Computation, Tax Payment, Compliance, Credit Utilisation and Reporting, leading to a complete transformation of the current taxation system.