An ode to My Principals - My Teachers 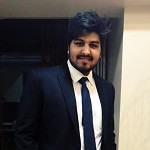 
"Don't pick a job. Pick a Boss. Your first boss is the biggest factor in your career success. A boss who doesn't trust you won't give you opportunities to grow." - William Raduchel, Assistant Dean at Harvard University

I am a Chartered Accountant and I pursued my articleship from Khimji Kunverji & Co.(Period : August, 2012 to October, 2014). My principal was Mr. Kamlesh Vikamsey. However I was fortunate enough to work with all the three senior partners, Mr. Nilesh, Mr. Ketan and Mr. Kamlesh Vikamsey.

It was a privilege to have excellent, compassionate and supportive bosses at my first job i.e. articleship. Excellent bosses lead by example. They model high ethical standards and set similar expectations for employees.  They facilitate learning, welcome ideas and most importantly believe in the employees. They understand when to interfere and when not to. More than anything, they make you responsible under them. For me, my first bosses will always be an inspiration.

1. Mr. Ketan Vikamsey – I worked with Ketan bhai(as he is fondly called) on numerous assignments. He has multiple qualities which everyone should imbibe. While taking reviews he would always be calm. He never wanted to dominate unnecessarily or show he is the boss. He would patiently listen and then question us. I think he was the most approachable person in office. Always be calm.

One extremely important thing which Mr. Ketan allowed is that even though I was a first year article, I was always asked to be present in partner reviews. He helped employees understand how their contributions fit within the big picture. He made it a point to ask me few questions to test my understanding even after my senior had solved all the queries. He wanted everyone to learn. Always focus on learning.

Also, apart from being a senior partner in KKC, he is an avid photographer. I happen to be one of his photography page followers and trust me, he is good. From Kenya to Norway to Varanasi, he never stops exploring. It is inspiring that he still takes time out of his busy schedule and follows his passion. We should learn that however big we may become, we should never stop doing what we love. Lack of time is no excuse! Always follow your passion.

There is one incident I clearly remember. During my articleship days, I performed in a couple of CA day functions organized by ICAI. He happened to attend one event and messaged me that night itself that I danced well and it was a good performance. This was a small, but very nice gesture. Everyone likes to be appreciated by their mentor. This is how much he believed in extra-curricular activities and encouraged others to follow.

2. Mr. Nilesh Vikamsey – Inspite of a Past President of ICAI, director of various companies and senior partner of KKC, he is the most humble person I have met. If he is in office and he takes notice of you, you are bound to get his trademark smile. Always be Humble

More than audit work, I was involved with sir for making various presentations, especially on the Companies Act, 2013. At that time, there was still a lot of confusion with numerous amendments. The quality which stands out here is his quest for perfection. Every PPT we would go through atleast 4-5 times, checking repeatedly if have missed something. Always target perfection.

Sir also focused a lot on academics. He would be the flag bearer of the “How to pass final CA exams” seminars in office, held half-yearly, giving tips and tricks. Once after a bad result of the office seniors, he called all the articles individually in his cabin and asked for reasons for their failure and motivated them. It feels wonderful to have your boss interested in your personal progress. Always value people.

There is one incident which really shows how professional he is. It was a Sunday and I was in office for a PPT. My colleagues had just left his cabin and had been given a proper bashing. Supposedly, the work was not upto the standard and sir was really infuriated. When my chance came to enter I was hesitant. No one wants to bear the brunt of an angry boss! However, he was a changed man by then and our review went really smooth! He knew how to treat his sub-ordinates. He had a control over his emotions. Always have a control over your emotions.

Another incident which I vividly remember is I was at the office with Mr. Nilesh Vikamsey and he was dictating an article to me. While typing I missed out something and asked him to repeat. When it happened for the second time, he told me “How will you hear? Your hair is covering your entire ears.” Even though it was a scolding, I burst out laughing and even he smiled. He had a sense of humor. Also, the very next day I had a hair-cut.

Not only on the job but also off the job, I learnt several things. Once incident which really impressed me took place around a couple of months back. One and half years had passed since I had left KKC. I was at the ICAI Bhavan, BKC for my GMCS-II when I saw Mr. Nilesh Vikamsey make an entrance with IFAC President, Mrs. Olivia Kirtley and few other ICAI seniors. I was taken by surprise when he himself came up to me, calling my first name, asked me how I was. 20 months had passed yet he remembered my name and made it a point to greet me. Frankly, how many former bosses would do that?

3. Mr. Kamlesh Vikamsey –As Sir was the tax department head and I was in the audit department, we did not have much interaction. However, the biggest virtue I learned from Mr. Kamlesh Vikamsey wasthat always give back to society. He lives by the mantra “Only a life lived for others is a life worthwhile“. A former President of ICAI, Member of External Audit Committee (EAC) of International Monetary Fund (IMF), etc. he is forever busy juggling his professional and society related commitments. He is a man of few words but what he says leaves an impact. Always give back to society!

On this Teacher’s Day, I take the opportunity to thank all my 3 principals and wish they keep inspiring hundreds of other articles. Thank you Sir, for you gave me learnings of a lifetime! In case, I ever hurt you, MichamiDukkadam :)