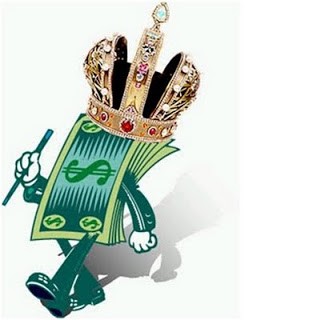 Can any economist or any financial guru from the world forum can explain that how many times the trillion and billion dollars will be used to buy the �defaults.
We spent trillion dollars tax savers money to Buy Smile on the face of world financial markets.
By this time you read this you must have witnessed the Big Smile across the world stock exchanges. We purchased this �SMILE� by spending a trillion dollar .More surprisingly I found that many economist and financial analyst and market speculators are cheering that a part of this trillion dollar� will now flow to emerging economies like India and China.
The end result of the inflow of this part will soar up the prices of the stocks. We are not making rather less interested to form any financial policies which will protect and stop further happening of �the stories like Greece. US buyout is now old story to many of us. But, what about the future nightmare stories?
Today one is transparent to understand that the entire world economy and financial system is based on speculation .Speculation build and stood and stand on dreams of speculations. I am not ashamed to address all my readers that we are every time we are turned out to fools. We are making money and profit at the cost of some other economies. This is not an inclusive world economic growth.
International Financial bodies are now appearing like those parents who are never scold or control their prodigal child�s activities. Moreover it tries to cover up the mistakes of its prodigal child and ask indirectly to commit more financial �nuisances and foul plays. Rule and regulations are now appearing as words on paper and records in websites archive list.
Parents of Debt
As a child has parents which included one father and mother, likewise the huge debt of Greece took birth in the same fashion.
� Instruments developed by Goldman Sachs, JPMorgan Chase and a wide range of other banks of US enabled politicians of European nations to mask over the additional borrowing in Greece, Italy and possibly elsewhere beyond means of payment by them in the future.
� These banks provided cash upfront in return for government payments in the future.
� They were never recorded as loans in the books of these European nations.
� These raised the bars of liabilities of these countries and mislead investors and regulators about the depth of a country�s huge liabilities which were beyond the capacity of payment.
��The country is, in the argot of banking, too big to be allowed to fail. Greece owes the world $300 billion, and major banks are on the hook for much of that debt. The bankers from Wall Street enabled Greece and others to borrow beyond their means, in deals that were perfectly illegal.
The below image is taken from New York Times which depicts the web of loans among Greece and other nations in Europe. 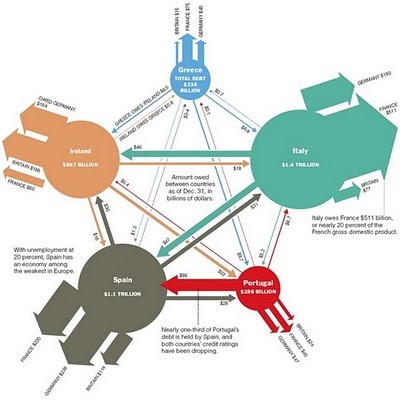 Now a question might come up how politicians and others masked the cash lending�s and never recorded them as loans. The ans some where lies within the European countries mind set. The Europeans have never, to this day, been willing to accept the consequences of this assertion of unity. They wanted a single currency but refused a common fiscal policy that could keep the books balanced; they wanted a common flag but rejected a Europe-wide Constitution; they desired the benefits of community but not its limitations or responsibilities.
According to Garry Schinasi, a veteran of the International Monetary Fund�s capital markets surveillance unit, which monitors vulnerability in global capital markets said �If a government wants to cheat, it can cheat. Banks have been exploiting these European countries against a fee for arranging the transaction of loans to cash lending ,Greece have paid $300 million in fees for arranging the 2001 transaction, according to several bankers familiar with the deal. If we look in to some of the historical data related to loans to Greece and other nations we find some interesting facts.
In 2001, just after Greece was admitted to Europe�s monetary union, Goldman helped the government quietly borrow billions, people familiar with the transaction said. That deal was hidden from public view because it was treated as a currency trade rather than a loan. This also helped Athens to meet Europe�s deficit rules while continuing to spend beyond its means.
The world was fooled at that point of time when the Europe was spending and its consumer price index and other economic gauges were showing growth and investment opportunities to the world market. Where in real terms the economy. �was getting eroded with mounting debts.
The fear of the fall is not yet over even after the trillion dollar spend to buy the debts. Since the biggest reason for the fear is the investments made directly and indirectly by the world market in European nations.
So now its well clear that how Greece and other European nations gave birth to the huge deficit with. It might come to my readers mind was their any foul play by the Wall Street. Diplomatically saying yes. Wall Street was against of the euro. Euro helped the European economies followed with Greece Italy Spain etc to come under one exchange only to hide the rising fiscal deficit at that point of time. Currency was one but unity was never their and no common flag. If Indian context one wants to understand this its like each state in India having a different flag and government with respective prime ministers but with one currency. Each and every state acting independently.
But the next thought we should think that today world is smiling at the cost of trillion dollars of tax savers fund and how much more smiling will be required to buy spending further trillion dollars .
After the Smile Buyout.
When this trillion dollar will winded up, the real picture of the world economies will come out of the woods. Many of the fools among us might say that who have seen the future regarding what will happen at that point of time.
Now I am sorry to disappoint all of them by saying that those who were in the holy process of creating this turbulent economic and financial condition and having similar thoughts regarding the future foresight are now a part of the writing the history of trillion dollar Smile.
What we need and how to protect the future, I leave this to all the speculators who are again busy for another round of show of high growth build on speculation. Only advise I will like to pass on to my speculator friends is that you please understand that tomorrow always comes and your speculative hard earned money is the next bait to get eroded if you don�t stop speculation..You need to formulate policies to protect your misfortunes.
In the future again we will see that such loans will be arranged without making proper records and even asking them up from the people and world. All we need stringent global rules and regulations to control the global financial market as well as abide by them. Today the world economies financial market is not having a particular epicenter. Its now a global epicenter of financial market