'Make In India' all set to confront the World Bank's Report


The government's frenetic effort to push the Ease of Doing Business in India has proved revolutionary. The series of planned campaigns launched under Modi-ship has proven the fact that, "There Has Never Been A Better Time To Make In India."

India by outstripping 60 countries, secured a rank of 130th in the World Bank's  "Ease of Doing Business" Report. Moreover, in terms of Starting a business, India is at 155th mark with New Zealand and Singapore is topping the charts.

# QUICKFACTS: DID YOU KNOW

According to World Bank, 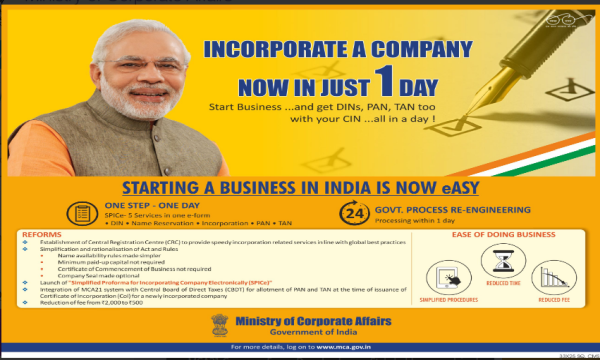 India is presently struggling with 12 to 14 incorporation procedures, varying from state to state. India aims to slash the current procedures to just 6.

Department of Industrial Policy and Promotion, Secretary, Ramesh Abhishek quoted, "As per World Bank it takes 26 days to start a business in India. Our target is to bring it down to 6 days by the end of March. This is the kind of dramatic change we want to."

He added, "DIPP's effort for ease of doing business is to ensure registration of all companies, including start-ups, is done in one day."

The Government of India has taken planned steps to make this 26-days long journey to just 6 and eventually to just a day.

Ministry of Corporate Affairs rationalized the rules for Name Availability. Out of the entire rules,

The government has launched an integrated e-Form SPICe. This single form submission provides the following services,

An applicant need not file different forms. Everything is automated under this time and cost effective form.

Ministry of Corporate Affairs has integrated with Central Board of Direct Taxes, for allotment of PAN and TAN along with the issue of Certificate of Incorporation. CBDT claims to extend this facility within 1 day's time, in some cases, they have delivered the same in just 4 hours.

Ministry of Corporate Affairs has made starting the business in India eASY. Ministry in affiliation with ICWAI has conducted an Ease of doing Business survey throughout the length and breath of the nation.

It has been discovered that in 2017, there are already 46884 companies officially Incorporated in India, from January,2017 till date.

However, Ministry still needs to expedite the processing of the integrated form, to make One Step- One Day a reality. Under Modi-ship India might soon give fierce competition to countries like New Zealand and Singapore.

The author is affiliated with QuickCompany which deals in Legal Activities like Private Limited Company Registration, MSME and trademark search, etc.