With the flowing air of the Union Budget which is going to be announced soon, the expectations of a common man makes him look upon to Mr. Arun Jaitley, Union Finance Minister for some relief. Needless to say, Institute of Chartered Accountants of India has a contributing role as to the process of building the budget insights. India being under the top 10 economies of the world, certainly needs drastic and practical improvements in the system. Let us understand the few main Direct Tax propositions which ICAI has made for the upcoming Union Budget.

The taxpayers are the ones from which the government gets the major share of revenue. However, the taxpayer has never got any respect in the bureaucratic system in our economy. Therefore, ICAI has suggested that a taxpayer should be treated with utmost respect, as one treats their clients. There could be even specific priority services to taxpayers paying a tax above a defined limit. Depending on the tax paid, there could be a gold card/platinum card like in credit card companies to the taxpayers which would offer services like renewal of AADHAR/Driving License/Passport etc. from home; based on the card held by the taxpayer. For other taxpayers, there should be an online grievance portal wherein they could voice their problems and expect a solution.

India has been traditionally following a progressive tax system. The natural logic says that tax has to be levied according to the income levels of the tax payer. As it is, many of the due taxes are already paid to the government via TDS/Advance Tax. However, it has been noticed that the assessing officers in India are given a tax collection target. At times when the targets are not met, assessees are harassed unnecessarily. Therefore, such targets should be removed. Instead, focus should be on adhering to the timelines as mentioned in the Citizens Charter of the Department.

III. Verification of all income-tax returns

It has been noticed that the deductions like 80C, 80 D and 24(b) claimed by individuals/HUFs are not subject to any verification. Due to this, there is a huge revenue loss impact of the following approximate figures:- 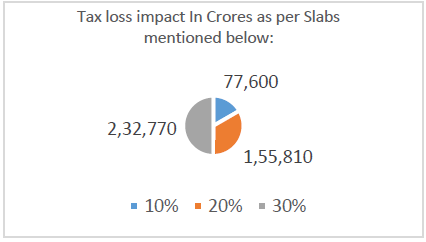 To improve upon this, a verification system should be enabled, which shall ensure arithmetical accuracy along with admissibility of expenditure incurred, income earned or invested based on the evidence provided. Since the resources with the department are limited, this work can be outsourced to other professionals.

IV. A single ITR form to replace all ITR forms

We have different Income Tax Return forms Vis ITR 1,2,3,4,5,6,7 for different taxpayers. It is proposed to prepare a single ITR form for all taxpayers. The common fields in all the ITRs can be clubbed as annexures. The assessee should click and fill only the annexure which is relevant for him. This would lead to simplification of the entire process and increase convenience in filing tax returns for the assessee.

Inflation has increased by leaps and bounds but monetary limits haven't really increased significantly in the past many years. Keeping in mind the Cost Inflation Index of the last revision year, and comparing them to the latest CII, the revision should be so made, so as to keep it within the limits.

VII. Difference in the definition of "related party" in Companies Act, 2013 and Income tax Act,

Income-Tax Act, 1961 has a clear definition of the term "related parties" for all transactions. These definitions are inconsistent with the ones given in the Companies Act, 2013. Therefore, there is a need for alignment between the two acts.

Usually, an assessee claiming income from house property is allowed a deduction of 30% under Section 24 (a). However, under Section 25AA, subsequently received unrealised rent is taxed which is not allowed this deduction. Therefore, Section 25AA should be amended such that any unrealised rent received subsequently shall first be allowed a 30% deduction and then the remaining amount be charged with income tax under the head "Income from House Property".

The provisions of Section 54 are unclear on the number of residential units which can be purchased in order to claim the exemption. Recent court verdicts show a consistent view that the assessee can take multiple units as long as they are residential. Therefore, such a provision should be inserted in Section 54 as well to bring clarity into the section.

Currently, the deductions claimed under Section 54/54F/54EC are not subject to any verification or audit. There is a high possibility that there could be inaccurate deductions. Therefore, there should be a provision introduced that exemptions claimed exceeding a specified amount shall have to obtain a certificate from a Chartered Accountant which shall certify the accuracy of the claim.

Section 80 CCG determines an exemption to certain assessees having a gross total income of up to Rs. 12 Lakhs. However, there is no proper clarification on the real intent of the proposed amendments as to whether LTCG [Section 112] and STCG [Section 111A] need to be excluded for determining the limit of Rs. 12 Lakhs.

The above mentioned deductions are allowed in respect of medical treatment of a dependent with specified disabilities. However, the deduction limits are not good enough to cover such expenses like medical costs/travelling costs. Therefore, it is proposed that the same should be increased suitably.

Under Section 80 EE, there is a huge disparity between what the section intends and what all it has covered. Logically, the benefit under this section could be extended to interest on the loan taken by an assessee for the first house acquired by multiple means of construction/purchase/acquisition irrespective of the date of the sanction of the loan which is currently 1.4.2013. Also, inflationary trends should be kept in mind and the additional deduction of Rs. 1 Lakh should be extended to all types of loans, even though it may be for the first house property. Lastly, the same can be introduced as a proviso to the section instead of the benefit being given for specific Assessment Years.

XIV. Deduction in respect of interest on deposits in savings account- Section 80TTA.

Section 80 TTA provides an exemption of Rs. 10,000 from interest earned by individuals and HUFs from the balance in their savings account. However, since the interest rate offered at savings account is low, assessees often keep their incomes in other banking modes available, like deposits. Therefore, the ambit of this section should be enlarged to include all kinds of interest incomes on deposits as well and not just the one from a savings bank account.

There have been continuous notices of many apprehensions that the tax payers have with the introduction of GAAR related to the arbitrary use of power granted to the revenue officers. The same should be addressed at the earliest.

XVI. Need to strengthen the validation system of FORM 26AS

Mismatch between the actual TDS/TCS/Advance Tax/ Self-Assessment Tax/Refunds/ High value transaction details and the amounts deposited/paid by the assessee and as reflected in Form 26 AS is not something unheard of. Due to this mismatch, many assessees have to go through a mental trauma by receiving notices from the Department. Therefore, to counter these issues, a proper verification system has to be developed for validating the details so that Form 26AS shows correct details.

All the above are few of the key provisions suggested by ICAI to the Ministry of Finance. Let us see how many of the above are actually implemented by the new government.