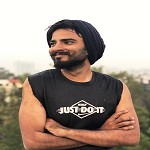 
In this article, I will go through the Timeline on the Murty-Sikka saga with the who said what details and also how Infosys can save itself.

I. The Murthy-Sikka Saga: Timeline 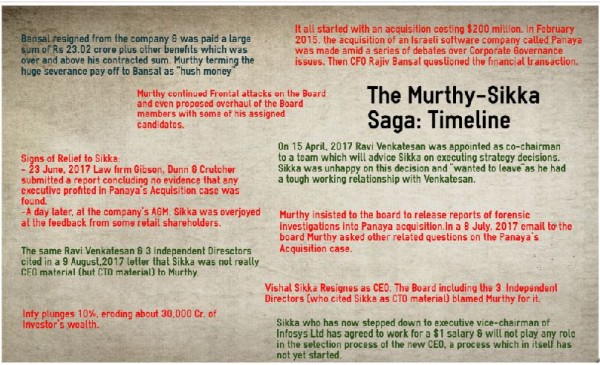 •  It all started with an acquisition costing $200 million. In February 2015, the acquisition of an Israeli software company called Panaya was made. Then CFO Rajiv Bansal questioned the financial transaction.

Bansal was paid a large sum of Rs 23.02 crore plus other benefits which was over and above his contracted sum

•  Murthy continued Frontal attacks on the Board and even proposed overhaul of the Board members with some of his assigned candidates.

•  Law firms Cyril Amarchand Mangaldas and Latham and Watkins carried out two probes in October 2015 and August 2016 to investigate if there was any impropriety in the Board's decision to give Bansal the generous severance payment.

Later on in 2017, The third probe by Gibson, Dunn & Crutcher investigated if any Infosys executive profited from Panaya acquisition.

On 15 April, 2017 Ravi Venkatesan was appointed as co-chairman to a 3-Executives team which was to advise Sikka on Executing Strategy Decisions. Sikka was 'deeply unhappy' with Venkatesan's appointment, even telling some executives close to him that he wanted to leave, given that he and Venkatesan had a tough working relationship on the Board.

'The day Ravi was made co-chairman, Vishal said I want to leave.' said one of the three executives. He wasn't happy with the appointment of the panel either.

• A day later, at the company's AGM, Sikka was overjoyed at the feedback from some retail shareholders.

'There were these two days over the last four months when I was so overjoyed that I thought I could stay with the company for a long time.' Sikka said.

• Murthy insisted to the Board to release reports of forensic investigations into Panaya acquisition.

• 8 July 2017, In an email to the Board Murthy asked other related questions on the Panaya's Acquisition case like

- If the company could categorically say that no employee or a relative of the employee benefited from Infosys's decision to spend $200 million to buy Panaya in February 2015.

- On why Infosys sacked former general counsel David Kennedy, and why the company handed out $868,250 in severance pay to him.

•  The Board replied in an emailed statement: 'The Board welcomes feedback, input, and criticism regarding substantive matters, but it denounces the repeated and unfounded personal attacks on Dr Sikka and the members of the Board. The Board will continue to judge itself, management and the Company based on substantive performance as established by demonstrable evidence, and not on unsubstantiated complaints by anonymous persons or media reports of statements made by critics who promote or rely on incorrect information.'

Adding to Board's reply Venkatesan wrote, 'I wish to assure you on behalf of the Board, that all of the questions raised by the idealist shareholders has been looked at carefully by the investigation and they found no evidence of wrongdoing by the company, or the directors and employees.'

•  Murthy has also sought for appointment of people like NYU's professor Marti Subrahmanyam as co-chairman, the replacement of Lehman as head of an important Board committee and the appointment of unnamed former Infosys employee 'schooled' in the company's values on the Board of Directors.

• The same Ravi Venkatesan & 3 Independent Directors cited in a 9 August,2017 letter that Sikka was not really CEO material (but CTO material) to Murthy.

•  Murthy in reply to E-mail by LiveMint wrote 'All that I hear from at least three independent directors, including Mr. Ravi Venkatesan (co-chairman), are complaints about Dr Sikka. They have told me umpteen times that Dr Sikka is not a CEO material but CTO material. This is the view of at least three members of the Board, and not my view since I have not seen him operate from the vantage point of an Infosys Board member.'

'I have nothing against Dr Vishal Sikka. I enjoy spending time with him. I have never commented about his strategy or its execution. My problem is with governance at Infosys. I believe that the fault lies with the current Board. If the Board had not embraced inaction and had ensured proper governance, then they could have created checks and balances required in any well-run company. That, alas, does not exist today.', he continued.

• Murthy has publicly lambasted Infosys over the course of the past six-seven months for lapses in corporate governance (allegations the company has denied repeatedly). In the latest email, he went on to criticize the Board for failing to uphold the company's famed governance standards and not creating 'checks and balances required in any well-run company'.

• Vishal Sikka Resigns as CEO, The Board including the 3 Independent Directors (who cited Sikka as CTO material) blamed Murthy for it.

• The Board blamed Murthy for Sikka's untimely exit stating that 'Mr. Murthy's continuous assault, including this latest letter, is the primary reason that the CEO, Dr. Vishal Sikka, has resigned despite strong Board support. Co-chair of the Board Ravi Venkatesan has repeatedly over the past few weeks publicly stated his and the Board's support for Dr.Sikka. The company categorically rejects any speculation or allegation of discord between the Infosys Board and Dr.Sikka.'

• Sikka who has now stepped down to executive vice-chairman of Infosys Ltd has agreed to work for a $1 salary & will not play any role in the selection process of the new CEO, a process which in itself has not yet started.

• Infosys yet to begin search for Vishal Sikka's successor.

Now what to do

• Meetings with Customers are necessary as Infy needs to build up Confidence once again. This also can be done with other stakeholders of the Company. Intermediaries can be bought in for regaining trust of other stakeholders.

• The hiring process for a New CEO will be a difficult one but the Board must not jump on for a quick fix by promoting a convenient internal candidate without the necessary skill set for this phase of strategic transformation. This is the same mistake that as the other 4 top IT services companies have done (excluding Cognizant).