The economy after Modi Government 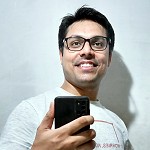 
CHANGING SCENARIO OF ECONOMY
The Economy after Modi Government

Steps taken and their effects:

STEPS TAKEN BY THE GOVERNMENT

a. Modi had begun promotion diplomatic relations with other countries. Inviting SAARC leaders to his swearing-in ceremony marked a renewal of the foreign policies, which had remained paralyzed for over a decade now.

b. At the BRICS (Brazil, Russia, India, China and South Africa) summit, Modi bargained hard and was able to launch the much-awaited New Development Bank and the Contingent Reserve Arrangement.

a. Tax reforms that would lead to some more money going into the common men’s pockets and setting aside funds to boost the sectors like manufacturing, infrastructure, irrigation, health and sanitation, among other initiatives, were applauded.

b. The Railway Budget focused on greater efficiency giving a go ahead to the much-awaited bullet trains and a totally revamped reservation system where about 7,200 tickets can be booked per minute and about 1.2 lakh people could be logged in at the same time. Wi-Fi is expected to be introduced in A1 and A category trains.
WTO

c. India’s stand on the Trade Facilitation Agreement (TFA) at the World Trade Organization (WTO) as India is wary that the TFA could compromise its own food security.

a. The government’s plan to allow 100 percent foreign direct investment (FDI) in railways, excluding train operations and safety, could well put the cash-strapped sector on the reform track.

b. The government has also cleared the FDI proposal in the defence and insurance sectors, where the investment cap has been raised from 26 percent to 49 percent.

a. In these hundred days, many bills have been reformed and authorities given more power –like the Telecom Regulatory Authority of India (TRAI), Securities and Exchange Board of India (SEBI) and Forward Markets Commission (FMC). This is expected to bring in more efficiency to the system.

b. One of the biggest achievements of the Modi government was the launch of the “Jan Dhan Yojana”, where the aim is to provide every poor and backward household with a bank account. On the day of the launch itself, 1.5 crore bank accounts were opened.

In a bid to clean the river Ganga, sacred to millions of Indians, the Modi government has set aside Rs2,037 crore. Besides this, Modi has been stressing on clean India where he has laid the responsibility on the shoulder of every Indian to keep the country clean.

The Modi government is all for transforming governance through its initiative Digital India and has launched portals where every common man can participate in governance.

Real economy: After disappointing GDP growth of 4.6 percent in the past two quarters of FY 2013–14,the new fiscal year began with stronger growth, primarily due to a boost from government spending and higher business investment. Improved availability of financial resources to the private sector, fiscal consolidation, improved external demand, and stabilizing global commodity prices will further provide impetus to economic recovery.

External sector: The balance of payment situation has improved significantly in the past year due to substantial improvements in both the current and capital account balance.

Consequently, the current account deficit improved from 5.1 percent in Q1 FY 2013-14 to 1.7 percent a year later. Capital inflows too improved in the last few quarters.

However, what is noteworthy is that the widening of the trade deficit was on account of an increase in oil and non-oil, non-gold imports during April–June 2014.

Financial market and sentiments: The equity market rose 20 percent since April 2014, and it touched a record-high level of above 27,000 in September. Government bond yields too fell 0.4 percentage points during this period.

The business outlook for the Indian manufacturing sector—the business expectation index—improved in Q2 FY 2014–15 due to greater optimism on the overall business situation, production, order books, capacity utilization, imports, and exports. In addition, pessimism on the cost of finance, cost of raw material, and profit margins decreased among manufacturing companies.

Future outlook & Challenges:India’s economic growth is expected to improve in the forthcoming quarters. The Reserve Bank of India projects an annual growth of 5.3 percent in FY 2014–15 and 6.4 percent in the following year.

Expectations on interest rate movements in the United States and economic reforms in India will continue to drive growth in the financial market in the coming quarters. 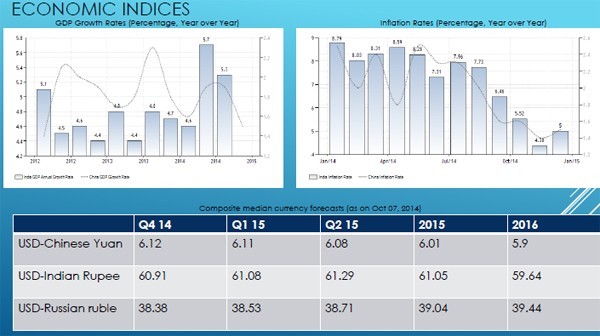