Many a times it has been observed that, there are various persons in our surroundings who are involved in social cause with no profit making objective in their mind. These kind of persons always deploy the funds raised by them into the noble cause, like cultural, economical, educational, religious, social or otherwise. There are various ways of raising funds by them, which can be by way of receipt of donation, charity or any other way. The another and the most important aspect of these activities are that they receive foreign contribution from the foreign source also, so that they can perform activities on a larger scale. But, indeed of their noble cause there are some restrictions and/or obligations which have been imposed by the Ministry of Home Affairs over the person and the registration is required to be obtained by the person supposing to accept foreign contribution.

In this Article, we will ascertain what are the obligations or eligibility criteria which are required to be fulfilled by the person receiving foreign contribution, what is the procedure and various other key points, by analysing the provisions made under the Foreign Contribution (Regulation) Act, 2010 (hereinafter referred to as the FCRA).

DEFINITION OF “PERSON” UNDER FCRA-

As per the provisions of clause (m) of Section 2 of the FCRA, “Person” includes-

REGISTRATION OF PERSON UDNER THE FCRA

As per the provisions of Section 11 of the FCRA, every person who is engaged in any cultural, economical, education, religious, social or like otherwise activities, and is expecting the contribution to be received by any foreign source, is required to attain registration with the Central Government, FCRA Wing of Ministry of Home Affairs (FCRA Wing) or have to attain prior permission of the FCRA Wing, before accepting any such kind of Foreign Contribution.

ELIGIBILITY CRITERIA FOR APPLYING FOR REGISTRATION-

As per the provisions of sub-section (4) of Section 11 there are certain conditions which have been imposed by the Central Government, which is to be checked by the person before applying for Registration under FCRA or obtaining prior approval, which are as under-

a) The person is not fictitious or benami:

As per Black Law Dictionary- a person appearing as a claimant with no right to do so, or

A person founded on a fiction; having the character of a fiction ; false, feigned, or pretended.

b) The person has not been prosecuted for engaging in activities which forcefully leads to conversion of religion, either directly or indirectly,

c) The person is not engaged in activities creating communal tension or disharmony,

d) The person shall not be guilty of mis-utilisation of its funds.

Example- An organisation is formed with an objective of promoting religious culture in the society, but it has started utilising the funds raised by them into any other line of activity which is not aligning with the objective of the organisation.

e) The person is not suppose to use the foreign contribution for the personal gain or for any purpose other than that for which the contribution has been taken,

f) The person has not contravenes any provisions of this Act, and

g) The person has not been barred by the Central Government for availing foreign contribution.

h) The person making an application for registration under the FCRA has undertaken reasonable activity for the benefit of the society at large,

If the person is moving an application for prior approval for the acceptance of foreign contribution, then it must have prepared reasonable project for the benefit of society.

i) There should not be any kind of conviction or prosecution pending in any other law for the time being in force against the person or any of its office bearers,

j) The foreign contribution by the person shall not in any way make affect to the sovereignty, integrity of India, security, strategic, economic and scientific interest of the state, public interest,  freedom of election or its fairness, and/or friendly relation amongst various states, and/or

k) The foreign contribution shall not lead to incitement of any offence or endanger anyone’s life or physical safety.

PROHIBITED AREAS OF BUSINESS IN WHICH FOREIGN CONTRIBUTION CANNOT BE UTILISED-

As per Rule 4 of the FCRA, there are two kinds of business/activities for which the foreign contribution is prohibited to be taken, which are as follows-

a) Any activity or investment which changes according to the market condition or force. In simple terms, stock market or any other platform as such. The activity which can lead to increase or decrease in the value of the Investment made, and/or

b) Any participation in any scheme or project which anticipates high return but is not directly linked with the object for which the organisation or association is running.

PROCEDURE FOR AVAILING REGISTRATION OR PRIOR PERMISSION UNDER THE FCRA- 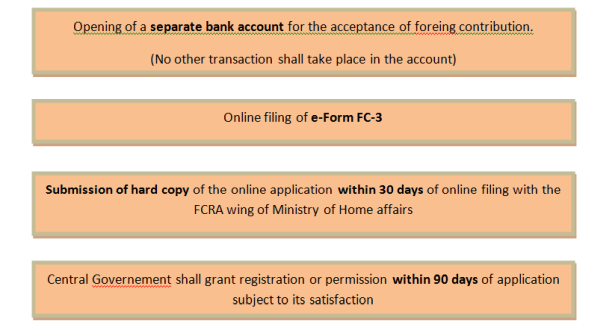 Important Key-Points to be noted down-

1. If the hard copy of the online application does not reach the office of Central Government within 30 days of online application, than the person will become ineligible to make fresh application for the registration or prior permission, as the case may be, for the period of six months from the date of cessation of 30 days as specified.

2.  The person shall not be granted certificate or prior permission, in case his certificate is suspended and the suspension is still continuing at the time of making of an application.

3. After the grant of certificate, the Central Government may suspend the registration for the maximum period of 180 days or cancel the registration, if it comes to know of any reason, that the person has made the false statement or misrepresents the facts for obtaining certificate of registration, or it is necessary for the benefit of public interest, or the person is not engaged in the chosen field of activity for the period of 2 years or more or for any other reason as specified under Section 14(1) of the FCRA.

On the other hand, if the person registered or granted prior permission wants to transfer any of the contribution to the person who is not registered under this act, can do so, with the prior approval of Central Government.

5.  The person who receives foreign contribution has to file online an e-form FC-4 with scanned copies of income and expenditure, receipt or payment account and balance sheet for every financial year within 9 months from the beginning of financial year on 1st April.

Various organisations engaged in the social activities and with no profit motive can avail foreign contribution, but for the same they have to avail either registration under the FCRA or avail prior permission of the Central Government. These provisions has been made with the motive of having better supervision on the foreign contribution entering into the country and to check whether the person accepting it, is not inducing the funds in any manner which is not the purpose for which it has been received or for any purpose which is against the public interest. Obtaining of registration under FCRA needs a lot of patience and follow-ups, and the professional dealing with it shall deal with the client accordingly.

Hope the above information has benefited you to some extent.

The author can also be reached at pcs.santosh@outlook.com