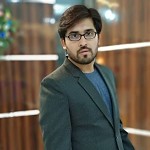 Just before the introduction of GST Law in India, on 28th June 2017, GST authority had issued Notification no. 11/2017 (Central Tax Rate). Relevant entry of the same specifies, rate of GTA service is 2.5% (5% IGST) with condition that, the service provider (GTA) is not allowed to take Input Tax Credit (ITC):- 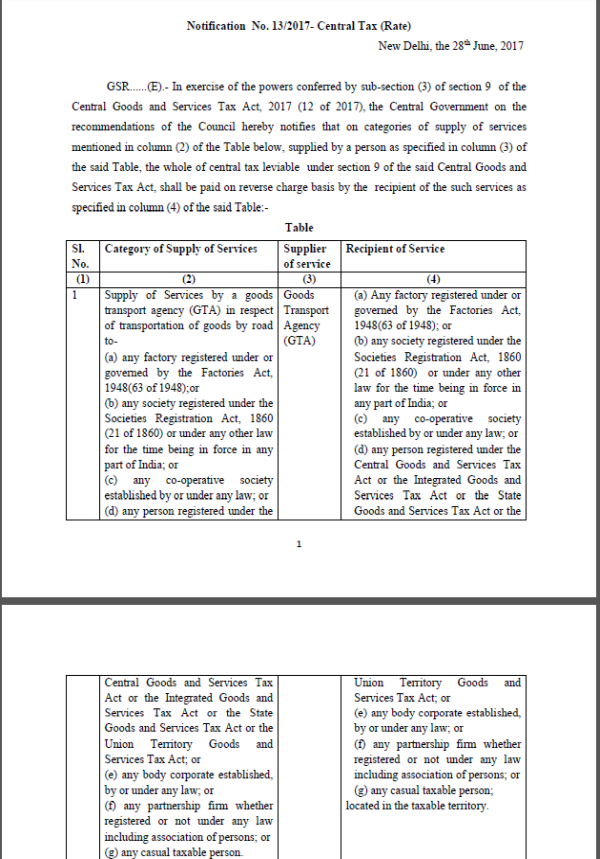 '... the Central Government, on the recommendations of the Council, and on being satisfied that it is necessary in the public interest so to do, hereby makes the following amendments in the notification of the Government of India, in the Ministry of Finance (Department of Revenue), No. 11/2017- Central Tax (Rate), dated the 28thJune, 2017…”

In addition, following entry of the said notification states as follows:- 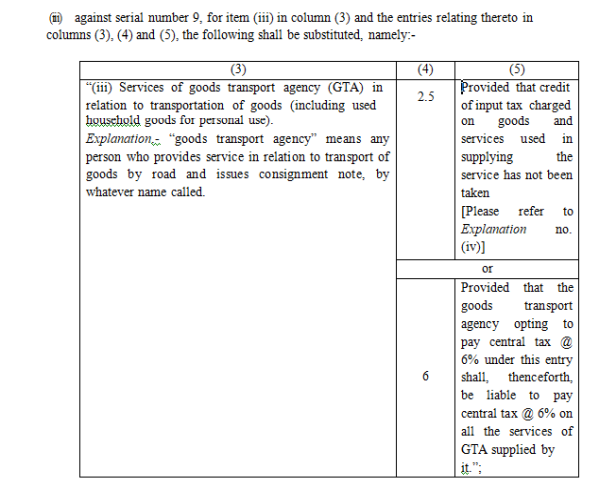 From the above it appears that, the intention of the notification was to give an option to remove RCM for GTA service& to provide GTAs an option to utilize ITC for the purpose of payment of GST on all the services provided by it by making the rate of GST at 6% (12% IGST) as oppose to 2.5% (5% IGST) earlier. However, this or any other notification does not change the applicability of notification number 13/2017 (Central Tax Rate), which stipulates RCM payment of GST at the hand of business entity on the GTA services received.

So, basically the RCM on GTA services received by business entity is still effective, even after notification number 20/2017 (Central Tax Rate), as the said notification states to pay Tax @6% (12% IGST) by the GTA, whereas it doesn't state that, if the business recipient still needs to pay the tax or not.

Due to this anomaly, on a same GTA service:-

This essentially crates ambiguity as follows,

Due to this, it appears that, GTAs who had opted to pay @6% started facing the problem as business entities are having reservation on the same. Large business entities may consider payment to the extent of value of GTA service to the GTAs and pay GST on the same directly to GST authority based on self-invoice & take credit. Whereas, GTAs are claiming reimbursement of the 6% GST (or 12% IGST) as it is a statutory payment which GST law mandates to pay.

To make it interesting let's take an example of Mr. Ram who is a GTA entity & Mr. Sham who is business entity. Earlier Ram was raising invoice value of Rs 1,00,000 for the GTA service provided by him to Sham & Sham was paying 2.5% (5% IGST) on it for Rs 5,000/- and was taking credit based on self-invoice raised by him. Also Sham was reimbursing the value of the service to the extent of Rs 1,00,000 to Mr. Ram as below:-

Here is what may happen,

The author can also be reached at cp171185@gmail.com

Disclaimer: The contents of this document are solely for informational purpose & personal view. It does not constitute professional advice or a formal recommendation. It is also not meant to portray anything against the GST law or any other law of the land for that matter. While due care has been taken in preparing the document, the existence of mistakes & omissions herein are not ruled out. The author does not accept any liabilities for any loss or damage of any kind arising out of any inaccurate or incomplete information in this document nor for any actions taken in reliance thereon. No part of this document should be distributed or copied without express written permission of the author.