Risha Lodha vs Institute Of Chartered Accountants Of India

A student named, Risha Lodha, moved to the Rajasthan High Court claiming that her examination results were wrongly withheld by the Institute of Chartered Accountants of India (ICAI) over alleged ‘derogatory' remarks that she had made in an email to the ICAI. Due to the COVID-19 situation in the country, the student had written an email to the Institute in November last year saying that if CA examinations are held, it would lead to a spike in cases. Justice Dinesh Mehta of the Rajasthan High Court bench noted that the thrust of her email was only to suggest that all levels of the CA examination should be conducted online for which an online infrastructure must be developed. The Rajasthan High Court has imposed a fine on the Institute of Chartered Accountants of India (ICAI) in the case.

Details of the case

In January 2021, petitioner Risha Lodha had appeared in CA intermediate examinations. Before appearing for her exams, she had sent an email in November, 2020 to the Institute of Chartered Accountants of India mentioning about the COVID situation the country is facing and requesting the institute to build an online infrastructure for examinations to be held online as offline examinations may lead to an exponential growth in covid cases. When the results were declared, she discovered that her results were cancelled claiming 'ADOPTED UNFAIR MEANS. LETTER FOLLOWS'.

No such letter followed as per the information so she wrote an email to the institute reiterating that she had not used any unfair means. In response to petitioner's above email, the institute on 30th March, 2021 responded and informed that the Examination Committee had reached a conclusion that she was guilty of making derogatory remarks in the captioned examination and thus, her result of CA Intermediate Examination held in January, 2021 had been cancelled. 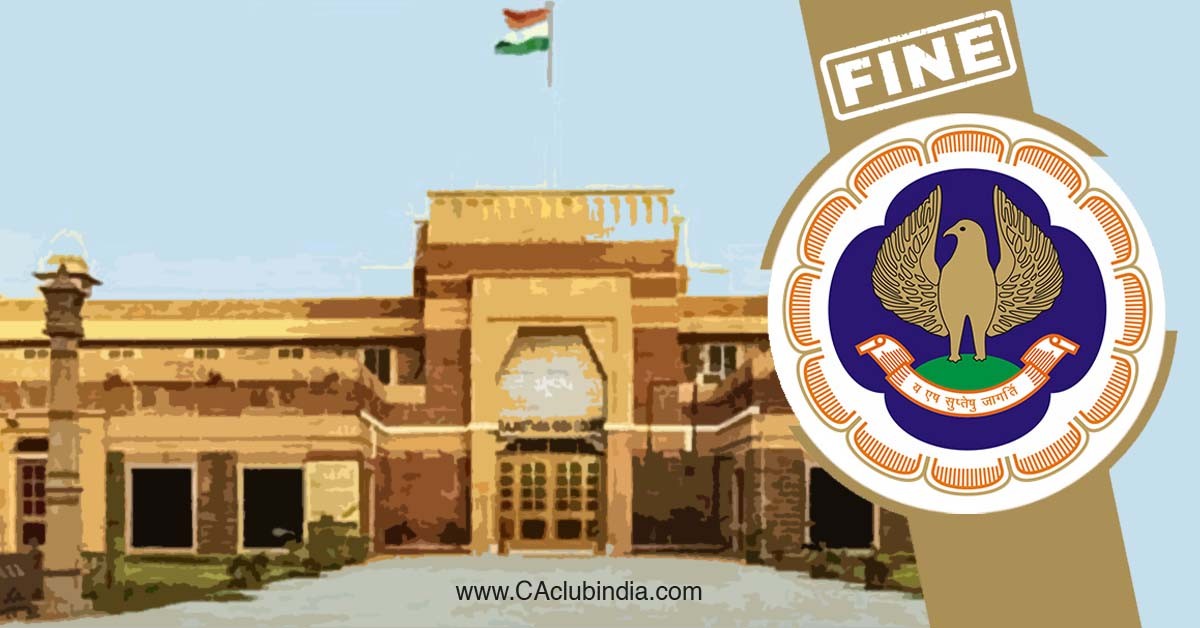 Judgement of the Court

The Rajasthan High Court came down heavily on the ICAI and fined them Rs. 20,000 for withholding the results of the student, Risha Lodha who has passed the CA intermediate exam but her results were disqualified for alleged claims that she had adopted unfair means. The court mentioned that a reputed body like ICAI should not stifle the voice of a student or any of its members in such a way. In a 20-page order, Justice Dinesh Mehta also ordered ICAI to declare the results of the student that show that she has passed the exam.

The judge remarked in his order that 'although the chronological facts are a handful, their culmination has been dreadful and conclusion thereof could have been doomful.' The judge also pointed out that Risha Lodha's email that was termed as 'derogatory' was more 'emotional' in nature. He also cited a Supreme Court order of 2014 saying that, 'a show-cause notice should necessarily state the action which is proposed to be taken against the noticee,' which was not mentioned by the institute before withholding the petitioner's results.

The Rajasthan High Court ruled in favour of the petitioner Risha Lodha and the respondent-Institute is directed to send original marksheet and certificate of passing CA Intermediate Examination to the petitioner, forthwith. The ICAI will be required to appropriately reflect the petitioner's result on its official portal. Also the fine of Rs. 20,000/- as indicated, shall be paid by the institute by way of demand draft to the petitioner within a period of 30 days from the date of the judgement.