We are bringing some policy related issues to your kind attention for immediate redressal. We have selected a couple of issues that are troubling the taxpayers. Redressal of these issues would not result in any additional cash outflows for the Government, but redressal of these issues promotes 'ease of doing business'& the theme of 'Invest India'.

Issue 1: Manner of the utilization of Input tax credit of CGST & SGST towards IGST liability.

Problem: Considering the diversity in geographical, socio, economical & cultural conditions in our Country Inter-State Trade or Commerce is inevitable and Government is also getting the major revenue from Inter-State Commerce only.   As per the proviso to Section 49(5)(c) of CGST Act, 2017 input tax credit of State tax shall be utilised for payment of IGST only after utilization of CGST input tax fully.

This led to a situation, where the taxpayeris forcedto discharge CGST liability by cash, while the input tax credit on account of SGST remains unutilised in the GST Portal.In Value added transaction which is the base of GST, this is not fundamentally correct. It results in payment of CGST through cash on one hand and on another hand ITC of SGST is laying unutilized. Why should assessee pays the GST when is having sufficient ITC in the Portal. The impact is SGST ITC is blocked with Government permanently and increasing working capital burden forever.

Solution: The manner of utilisation of input tax credit towards payment of IGST liability should be left open at the discretion of the assessee so that it wouldenable the optimum utilisation of Input tax credit available to the assessee. Funds of taxpayer would not remain unutilized, assessee need not pay the compound interest to Bankers on this funds which were unutilized. Anyhow taxpayer would not be availing, utilize the ITC more than what he is entitled so there is no additional cost to Government Exchequer. Government revenue is not impacting anyway kindly consider for request for change of the policy. 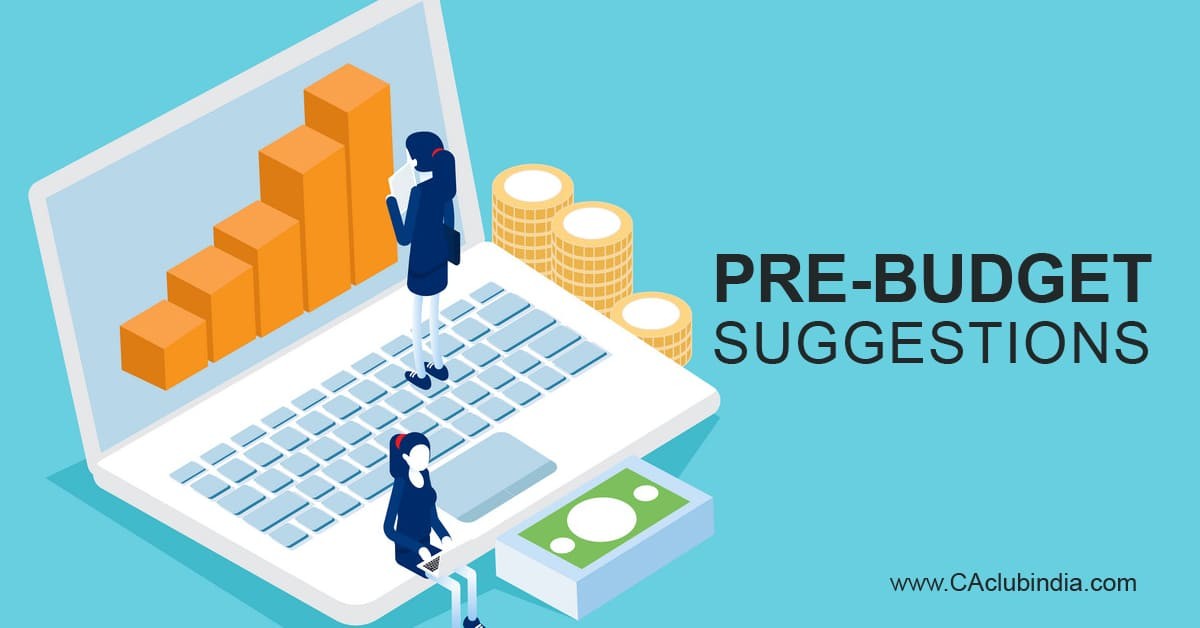 Issue 2: Eligibility of Refund of GST paid on capital goods procured by the exporter.

Problem: Presently GST department as per Rule No. 89 of CGST Rule, 2017 is denying the refund of GST paid on Capital Goods like Plant & Machinery for Exporters exporting under Letter of Undertaking (LUT). Due to such a restriction, GST paid on Capital Good would get added to the cost of goods and services exported from India which is hampering the competitiveness of Indian goods and services in the international market. This goes against the principle of taxes not sticking for exports.

Solution: The policy of the Legislature & Central Government is to Zero Rate our exports however this policy is not implemented fully at ground level due to bureaucratic issues. For one category of exporters who are exporting the goods with payment of IGST under Rule 96 of GST Rules, GST department is sanctioning the refunds of ITC without discrimination on all Inputs, Input Services and Capital Goods. Whereas those who are exporting the goods or services under LUT in terms of Rule 89, the GST department is denying the refund of GST paid on Capital Goods.

This discrimination is hampering the ability of exporters of who are exporting the exempted goods in GST like Milk, unbranded shrimp, feed, flowers, rice, medicine, food supplements, coffee seed and many agro-based products. This is even severely affecting the new exporters who invested lot of money on Plant & machineries.

Refund of input tax credit availed on capital goods should also be granted when goods or services are exported under LUT especially granting the refund under other option (i.e.. Zero- rated supplies with payment of IGST under Rule 96)otherwise results in hostile discrimination. Further the grant of such refund of the input tax credit on capital goods would not only leave some amount of money with exporters, they re-invest the same to fulfil more export orders, this results in more employment, more consumption and more foreign currency to our Country.Therefore, we request your good selves to sanction the refund of ITC on Capital Goods to all the exporters without any discrimination.Government revenue is not impacting anyway, as this amount is already laying unutilized in exporter's credit account in GST Portal kindly consider for request for change of the policy.

Note: This argument would also apply for furthering the cause of inverted duty structure input service and capital goods restriction. This also needs to be amended.

Issue 3: Enabling of filing of current month self-assessed return even if tax is not paid.

Problem: The GST portal does not enable filing of current tax period GST returnif the tax is not paid. Such non-enabling of filing self-assessed return results in late/non filing of GST return results huge interest cost, late filing fees. Further consequence is if the taxpayer is unable to file one month return, due to this problem he is unable to file future returns also. This also on the ground leads to non compliance in subsequent months and tax collection being lower.

Solution: It is recommended to make changes in the GST portal to enable filing of current month self-assessed return even if the tax is not paid. Law permits furnishing of a return without payment of full tax as self-assessed as per the said return. No such facility has been yet made available on the common portal this inflexibility of the system increases the interest burden, payment of late filing fees. The GST Council vide 31st Meeting held at New Delhi on 22nd December 2018 recognized the fact that such module is not yet enabled in the GSTN Portal.

Enabling this facility, filing the GST Returns self-assessing liability though not paid the full tax, would save the interest, late filing fees & penalties to the taxpayers. This module even would increase number of GST Return filers. This proposal while collecting more revenue also would not cost anything to the Government.

Suppliers to Government Bodies-payment of GST on realization basis

Solution: Therefore, it is highly recommended to immediately release such IGST refund claims of the genuine exporters and help them in ease of doing the businesses by sanctioning the backlog refunds immediately. The compliance categorisation into ABC which was part of the initial proposal now is in limbo- maybe again taken up.   If this GST refunds amounts are released and used for operations, they fulfil more export orders then only exporters would be able to be competitive and access more working capital funds to fulfil export orders.

Just because some fraudsters engaged in issuing the fake invoices or claiming the excess refunds withholding the IGST refunds for genuine exporters under guise of pending verification results in affecting morale of genuine exporters. It is going completely against to the theme & slogan of present Government 'Ease of doing Business'. Instead of easing the business GST department itself is making the troubles to exporters, genuine exporters are crying for their IGST refunds. It is their legitimate refunds, kindly direct the field formations immediately to release the refunds for genuine exporters and not wait for internal instructions. If the refunds not released within time, when the principal amount is released Government is forced to pay the interest @6% for such delay.

Solution: Government issued the Orders bifurcating/allocating taxpayers for administration between the State & Central Government. Once an assessee is allocated for Central Tax department administration, State Tax officers should not take up such assessee for administration, enquiry, audit e.t.c. Vice versa is also same. A clarification is to be issued in this regard prohibiting simultaneous cross empowerment of both the wings otherwise cost of doing the business would increase, going contrary to 'ease of doing business'. At this juncture we also wish to suggest that the GST tax administration of both the Central & State department should be merged into single service or under one roof, or under one head, this would improve the tax collections, decrease the corruption and it would become history in India's administration.

Kindly consider oursuggestions. These suggestions would not increase the cost to Government rather increase the tax collections, promotes the 'ease of doing the business & Invest India'

Enroll for our Certification Courses like GST, Excel, IND AS, Tally and Others