The Companies (Second Amendment) Act, 2002 provides for the setting up of a National Company Law Tribunal and Appellate Tribunal to replace the existing Company Law Board and Board for Industrial and Financial Reconstruction. The setting up of NCLT as a specialized institution for corporate justice is based on the recommendations of the Justice Eradi Committee on Law Relating to Insolvency and Winding up of Companies.

Need of Specialized Courts or Tribunals: The genesis of setting up of specialized tribunals can be traced to the Supreme Court judgment in Sampath Kumar case. In that case, while adopting the theory of alternative institutional mechanism for Supreme Court referred to the fact that since independence, the population explosion and the increase in litigation had greatly increased the burden of pendency in high courts. The supreme court also referred to studies conducted towards relieving the high courts of their increase load; the recommendations of the Shah committee for setting up independent tribunals as also the suggestion of the administrative reforms commission for setting up of Civil Service tribunals.

NCLT can be called as Mega Tribunal. Because NCLT will CONSOLIDATE the corporate jurisdiction of the followings:

· The Board for Industrial and Financial Reconstruction

· The Appellate authority for Industrial and Financial Reconstruction

· Jurisdiction and powers relating to winding up restructuring and other such provisions, vested in the High courts

Dissolution of CLB: According to this notification Company Law Board (CLB) stand dissolved w.e.f. 1st June, 2016. Notification of this section 466 makes last Chairman of CLB as Provisional and first Chairman of NCLT.

Benches of NCLT:  Initially NCLT will have eleven Benches, as per list given below.

The proposed NCLT will have judicial and technical experts who will handle all matters presently being handled by CLB, Company Court and BIFR with much wider jurisdiction in terms of scope of the subjects.

Section 441. Compounding application for certain offences shall be made before the Tribunal under

ADMINISTRATION OF NCLT AND NCLAT

Section 415 to Section 433 (both inclusive) has also came into force. These sections deal with administration of NCLT and NCLAT.

CONSTITUTION OF NCLT AND NCLAT:

National Company Law Appellate Tribunal, constituting of a Chairperson and not exceeding eleven members for hearing appeals against the orders of the Tribunal.

The Secretary, Ministry of Corporate Affairs shall be the Convener of the Selection Committee. 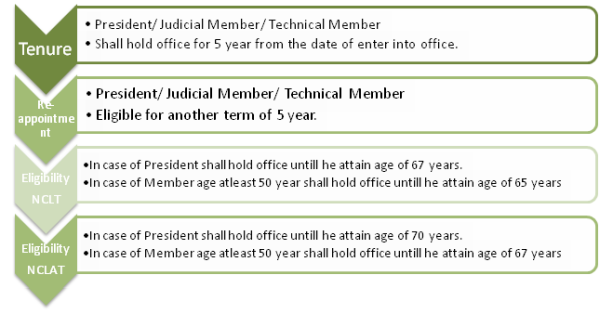 SCOPE of Services for PRACTICING COMPANY SECRETARIES under NCLT:

The establishment of NCLT/NCLAT shall offer various opportunities to Practicing Company Secretaries as they have been authorized to appear before the Tribunal/ Appellate Tribunal. Therefore, Practicing Company Secretaries would for the first time be eligible to appear for matters which were hitherto dealt with by the High Court viz. mergers, amalgamations under Section 391-394 and winding up proceedings under the Companies Act, 1956. Areas opened up for company secretaries in practice under NCLT are briefly stated hereunder:

PCS as Member of NCLT: A Practicing Company Secretary can be appointed as a Technical Member of NCLT, provided he has 15 years working experience as secretary in whole-time practice.

Insolvency practice can also open up a new field of activity for service professionals while improving the quality of intervention at all levels during rehabilitation/winding up/liquidation proceedings. Law should encourage and recognize the concept of Insolvency Practitioners (Administrators, Liquidators, Turnaround Specialists, Valuers etc). Greater responsibility and authority should be given to Insolvency Practitioners under the supervision of the Tribunal to maximize resource use and application of skills.”

A.  Winding up: The National Company Law Tribunal has also been empowered to pass an order for winding up of a company. Therefore Practicing Company Secretaries may represent the winding up case before the Tribunal.

B. Compromise and Arrangement: With the establishment of NCLT, a whole new area of practice will open up for Company Secretary in Practice with respect to advising and assisting corporate sector on merger, amalgamation, demerger, reverse merger, compromise and other arrangements right from the conceptual to implementation level. Company Secretaries in practice will be able to render services in preparing schemes, appearing before NCLT/NCLAT for approval of schemes and post merger formalities

I. Since all powers of BIFR have been entrusted to NCLT ,detecting the Sick companies and providing resolution of the queries and for making reference to the Tribunal for revival and rehabilitation of the Company

II. The provisions also mandated preparation of scheme and seeking approval from the Tribunal as may be required. Thus the practicing professionals could play a pivot role in the same area.

In view of vast opportunities emerging with the establishment of National Company Law Tribunal, the Practicing Company Secretaries should standardize their competencies with the global benchmarks to provide value added services in assisting the Tribunal in dispensation of justice and speedier disposal of matters like merger, amalgamation, restructuring, revival and rehabilitation of sick companies and winding up of companies.

[1] in law, industrial finance, industrial management or administration, industrial reconstruction, investment, accountancy, labour matters, or such other disciplines related to management, conduct of affairs, revival, rehabilitation and winding up of companies

[2]  in law, industrial finance, industrial management or administration, industrial reconstruction, investment, accountancy, labour matters, or such other disciplines related to management, conduct of affairs, revival, rehabilitation and winding up of companies.