My Journey from "Worthless" to "Priceless" #MyCAstory

I am a firm believer of destiny. Things happen for a reason. This was my belief till I wrote my first attempt of CA Finals in November 2016. My eligible attempt was May 2016. However, I had not cleared my group 2 IPCC and therefore decided to join articleship after giving my group 2 in November 2013 and thus pushed my attempt six months further. In this process, all my friends were may 2016 attempters and I was alone in the November 2016 batch.

I was indeed filled with joy knowing all my friends cleared in may 2016 attempt. This strengthened my belief that i could clear too. But as days passed by I guess I started taking things lightly considering that i could clear easily and my study speed reduced. Maybe I got overconfident or just too drained after two and half years of intense articleship that subjects that at first interested me, didn't interest me anymore.

In October, I gave the mock test and came home ina complete panic. I could not even complete half the paper and out of what I wrote I wasn't sure of half of it. I could barely expect 25 marks. I was in a state of shock. I did not know what to do. I was just one month away from exams and totally unprepared. However, my sir guided me and tried to motivate me. So did my parents. And i somehow kept myself stable through October.

Then came the judgment day. I gave my FR paper and came back home in the same state of shock and panic. And this time it was worse. I could not eat anything. My heart was palpitating very fast. My hands were shivering. My feet were cold. I was feeling nauseous. I did not sleep in the entire night. The next morning I held the SFM Practice Manual and it looked completely foreign to me. I could not recall the basic dividend chapter. I did not know what to do. It was 12 hours since anything solid entered my stomach. I was weak. I called up my friends like I had lost my mind. My mother told me that I had to give the exam. It was not about passing the exam anymore. It was about facing this strange thing that was happening to my body. My friends who cleared in may attempt came over to my house and made me study and helped me recall my chapters. Although it did not help much at least they tried. This went on for eight days straight. I was turning weak and mentally disturbed. I could not take this further and stopped at group one. After this i was admitted to hospital for a week. The body was regaining health but not the mind. I lost my sleep completely. My heart was beating very fast. There are barely few words to explain what i was going through. It was then when i seeked medical help that i was told that i had an anxiety attack.

I am a very talkative person by nature. And i was a very joyful and fun loving person. But this completely changed me. I became very silent and had a frown on my face always. After about ten days, i started getting bad thoughts and went into depression. It got so worse that i decided to end my life. I had multiple attempts at it too but failed. Maybe I was not courageous enough to do it or maybe somewhere deep down I still believed that there was hope. I was very dedicated to CA course and it was my passion. But not anymore. I started fearing any person related to this field and cut all my contacts with my friends. I started getting this insecurity that i was just not good enough for anything. I am useless and worthless. From 'priceless' to 'worthless' was just a 2-second journey and my entire life changed. 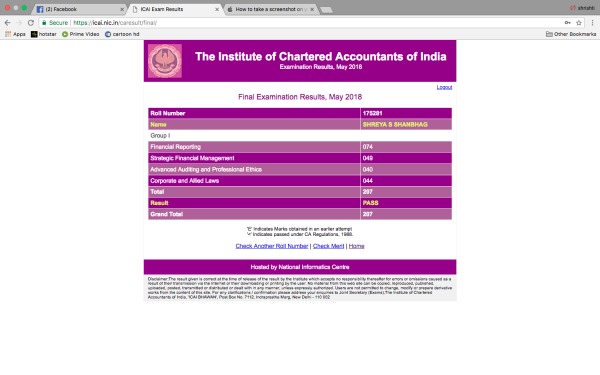 I decided to quit but my parents suggested me to continue. I started counselling and continued studying. I then decided to give group 2 this time in may 2017. I studied but then again the same thing happened and i panicked on the exam day. The same thing continued for 8 days. All those 6 months of counselling was all in vain. This time i told my parents that i tried but this is not working out. I better quit. So they suggested me to do M.Com. i was mentally exhausted now and no patience to even argue with them so agreed and joined. After two years of completing B.Com, i joined for post graduation where all my classmates were younger to me by two years.And at the same time prepared for group 2 again. I joined an evening college. So my routine was 10 to 5 in the library studying for finals and then going to college just to relieve myself. I did not give it much importance. But that place totally changed me. People over there were working class who were not related to CA course. For them i was someone great. They boosted my self-confidence and constantly kept me motivated. They were more sure of me clearing the exam than I ever was. I finally started talking to everyone, mingling with the crowd and participating in activities. This time I really did not bother whether I would pass or fail. All I was concerned was to stay calm no matter what.

I went into the exam hall in november 2017 with a calm mind and came out three hours later without a frown on my face. I was not specifically happy but at the same time nor was i sad. I was neutral. With this attitude i gave the three papers too. And trust me when i say it was a very tough attempt since a long time.

I continued my M.com exams after that. Went on a small vacation without even bothering about the results. All i had in mind was that i am doing post graduation now and that is more important.

January 17th 2018, i keep refreshing the results page at around 2 and it shows that the result will be out at 8 in the night. I patiently wait and check the results at 6 and Bam!!! I cleared. With very good marks. 58/66/47/63. Exemption in ISCA. what a happy moment, right? No. i just saw the result and hugged my mother and told her, 'mom, i cleared. Its 6 o'clock now. I need to go to college. My friends are waiting.' and just left. I went into college and just smiled as i entered and they knew i cleared. I was welcomed with claps and hugs. Now that was beautiful.

After this i guess 80% of the old me was back. And i studied for group 1 in calm and with no panic. In april i went to the college trip for two days and then we got close to our seniors too and after we were back we prepared for their send off. So all in all my entire april was just 25% studying and 75% enjoyment. Yet i did not panic. I told myself if it didn't click this may, november is always there. On 28th of April my Father was admitted in hospital for some illness and he forcefully took a discharge a day before my exam (may 1) just so i could study in peace. So you can guess that i actually didn't study that well even on the previous day of the exam. However i gave all the four papers with a smile not letting the preceding paper affect the succeeding. After the law paper i came out with a burst of laughter telling my friends 'lets meet here after 6 months.' knowing how bad the paper went.

I then applied for MCS and ITT courses in Pune. I am from Mangalore and did not get a seat there, so decided to explore. MCS got over in june and i came to pune again on the 18th of july, and my ITT started on 20th of july. All were worried in the class as most of them were expecting their results. And the results were out. But i kept my calm and decided to check it once am home. I reached home at 3 in the afternoon and checked my results and Bam Again!!! Pass. 74/49/40/44. I got saved ...just saved. I told my classmates and they were very happy. All those friends with whom i cut all my contacts, called me up and congratulated me and this time i spoke to them with all confidence. I had achieved that inner peace by now that nothing could shake my mental stability. Come what may I was now ready to face it. This attitude made it a lot easier for me to clear exams. My preparation for group 1 was not that great but then I did not let myself lose my calm and that affected things a lot.

If you asked me on 9th november 2016 would I even become a CA in my life, I would say no. but here i stand today clearing this hurdle too. These one and half years changed my life in a drastic way. I was down and rose back again. I tried to give up but I guess my inner self did not want to. My parents stood by my side all the time. I thank them from the bottom of my heart. Also, my classmates who constantly kept motivating me. They made me believe me again that I could do it. My sir who not only taught me 8 subjects of finals but also gave me life lessons, is that one person who knew from the very beginning that i would end up a CA one day. I know i have troubled him a lot, and irritated him. I was very notorious in class and seeing me become silent must have been very painful for him too. He did all he could to get me back on track.

After this, I have made it my goal to help anyone who is facing this situation. I call my friends and check on them. I haverealizedd that our purpose of life is served best when we help others grow. We must not grow alone, instead take others along with us and make them grow too. There no better joy than putting a smile on someone's face.

I learnt these 9 things from this rollercoaster ride:

I am crazy about movies and music, so I would end with this quote from Kung Fu Panda,

'Your story may not have such a happy beginning but that does not make you who you are, it is the rest of it - who you choose to be' - Soothsayer

The author can also be reached at shreyashanbhag94@gmail.com