Mega Merger of PSU Banks in India: An Insight 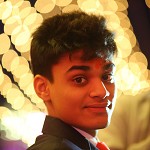 
Announcing the mega plan of Banks' merger on Friday August 30, 2019 with an aim to have financially strong Public sector banks in India, the Finance Minister of India, Nirmala Sitharaman, has outlined the Government's plan to merge 10 public sector banks into four large banks. After the mergers, there will be 12 public sector banks in India. The merger is expected to create fewer and stronger global- sized Banks to boost economic growth. As per studies conducted until now most of the mergers done in the past, have proved to be an overall success for the weaker banks although there are no concrete parameters to verify this observation. Hence going by the track record, merger and acquisition in Indian banking have been fruitful for the Indian Economy. In this article we are going to discuss the scope and implications of this decision in a question- answer pattern and also shed light on the history of bank mergers in India.

Mergers of banks in India started in the 1960s. Initially banks were merged to save non- performing banks or non- efficient banks but as time evolved the system too evolved. In the recent times mergers and acquisitions have also been made on grounds of business growth, profitability and organizational restructure and an attempt to make an Indian Bank join the league of the global giants. Here's a small summary of the mergers that have taken place -

What is happening in this mega merger 2019?

In the mega merger, announced on August 30, 2019, ten public sectors banks will be reduced into four large banks. As the centre attempts to boost economic growth following a six- year low, this consolidation is expected to create fewer, and stronger, lenders. Sitharaman announced that the merger is being undertaken in order to revive and revitalise the banking sector to stay on course for the government's stated target of touching $5 trillion as an economy. Here is an insight to the decisions taken by the centre - 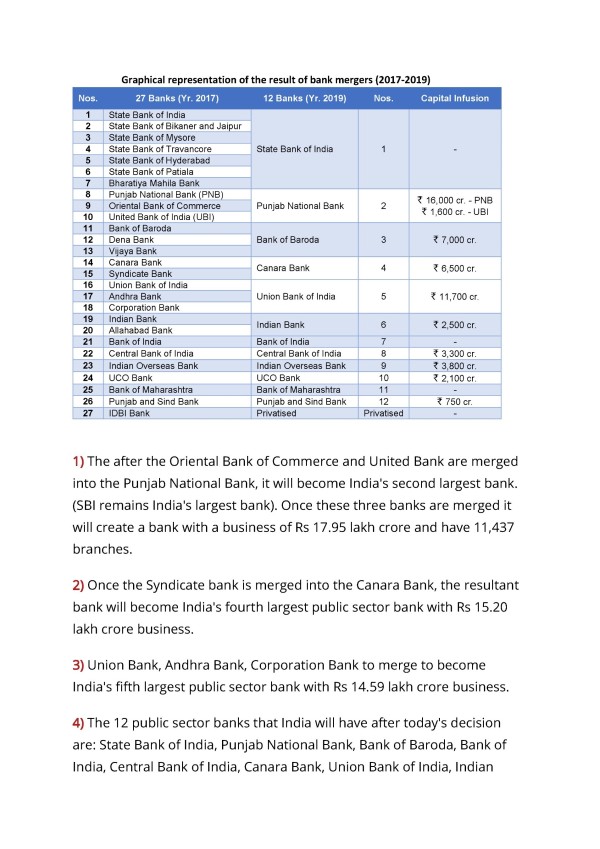 Is the mega merger getting support?

According to the Banking Companies (Acquisition and Transfer of Undertakings) Acts of 1970 and 1980, the central government has to consult the RBI before formulating a plan for PSB merger; so it is evident that the RBI is in support with this decision of mega merger. Also, many experts are in favour of this decision: PNB's MD and CEO said this merger will be beneficial for the banking system and the country as a whole and it will bring a lot of synergies into the existing entities; Canara Bank's MD and CEO said the move will provide better opportunities to do quality business; a partner of PwC India said that this would, in turn, help in better loan monitoring, overseeing the end- use of funds, and better recovery; a partner at Boston Consulting Group explained that a bigger bank helps in more independent decision making.

Is anyone pessimistic about it?

A report by Credit Suisse claimed that the merger is unlikely to revive credit growth or have meaningful cost synergies. It explained that the merger is unlikely to meaningfully revive the flow of credit to the liquidity pressed NBFCs - given the already high share of NBFC exposure in constituent banks, the four new entities will have more than 10% of their loan exposure towards NBFCs. The report summarized that the merged banks will continue to depend on external infusions inviting frequent dilutions. Prakash Agarwal, Head - Financial Institutions at India Ratings, observed, "The mergers are mostly among larger banks with absorbing bank not necessarily in strong health." They all face similar issues like falling profitability, asset quality deterioration, an ageing workforce, and lazy approach to digitisation. The Four Bank Unions - All India Bank Officers' Confederation (AIBOC), All India Bank Officers' Association (AIBOA), Indian National Bank Officers' Congress (INBOC) and National Organization of Bank Officers (NOBO) have threatened to go on indefinite strike from the second week of November to oppose "merger and amalgamations in the banking sector." They have also threatened a two- day strike from September 25 to September 27.

Will this merger actually help?

The government has listed three broad gains from the consolidation calling it 'Unlocking potential through consolidation'. Let's examine them briefly:

While most of the anchor banks will take a near- term hit on asset quality, share- swap ratios for the merger will not favour the smaller banks. Shares of these merging banks have corrected sharply since the announcement. Analysts recommend staying away from merging entities till more clarity emerges. Also, the integration process would take 24- 36 months. Website, mobile apps, IVR - all have to get merged into one. During the integration, the lenders will generate huge amounts of data and analytics will play a bigger role to create 360- degree user profiles, taking data from multiple banks. A senior executive at a multinational tech services firm said even if the core banking platforms are the same, each would require customisation.

What is the take- away?

The rationale is evident: banks saddled with bad loans or weak operating metrics are to be integrated with stronger, more efficient banks. Besides, banks working on a similar technology platform (core banking solutions) are being merged to ensure smooth integration. To support this consolidation, the government is infusing capital into the banks. Through this step, the government aims at improving operating efficiency, governance and accountability of the PSU banks and also facilitate their effective monitoring. However, the mergers will bring their own set of challenges and may not lead to value accretion for shareholders but it is expected to create higher efficiencies through better utilization of capital, greater credit disbursal, focused customer service and global expansion opportunities.